Automation: the dread of workers

In a world where machines not only carry out orders and think but are also starting to learn, the chances to automate jobs could increase beyond belief. But if machines do our work, what will we do? This is what many workers and also quite a few economists dread. However, what some see as a threat, others perceive as an opportunity: contrasting views that are repeated every time a technological change shakes up our society's status quo.

Automation can affect employment in different ways. In general, those who fear being replaced by machines at work base such misgivings on the «substitution effect» because automation was, is and will be a clear substitute for numerous jobs, leading to the destruction of employment in certain sectors and occupations. At the beginning of the 20th century just over 40% of the US workforce was employed in the agricultural industry, far from today's figure of 2%. Nevertheless the US is still one of the world's main producers and exporters of agricultural products and its unemployment rate is at a very low 5%.

In spite of the similarities we may find between the current situation and what has happened in the past, there are several factors that suggest the cycle we are currently experiencing is different. The exploitation of big data and advances in visual technology and language recognition could result in a genuine revolution in the development of artificial intelligence. A Fourth Industrial Revolution as it is already being called. In the not so distant future a machine could operate as a taxi driver or radiologist. According to a recent report by the consulting firm McKinsey, the current revolution would be able to substitute 45% of the tasks carried outby workers at present, a figure that comes close to the reduction from 40% to 2% in the US agricultural industry mentioned above (see «Will the Fourth Industrial Revolution come to Spain?» in this Dossier for more details on the different studies dealing with this area and for an analysis of Spain's situation).

In addition to the substitution effect there is also the complementarity effect. There are jobs where automation complements the worker and, in such cases, machines actually increase worker productivity, also leading to a rise in their income. Beyond these two effects (substitution and complementarity), what critics of automation often ignore is the fact that technological innovation expands the boundaries of production: more can be produced with the same resources (GDP, or the size of the economic pie or income to be distributed, grows). Consequently, the level of economic activity clearly increases if the resources released by new technologies are used to carry out other tasks and produce other goods and services (which may or may not be related to the technology developed). This is the analysis carried out by economists such as David Autor from the Massachusetts Institute of Technology which alleviate the fears of the new era of intelligent machines. When it comes down to it, and as he says in one of his articles «Clearly, the past two centuries of automation and technological progress have not made human labor obsolete».1 Moreover, the Industrial Revolution (1760-1840) brought with it economic growth on a huge scale.2

Although the long-term virtues of the Industrial Revolution are evident, not everyone gained from the change in the short term. Obviously the first people to suffer were the workers who lost their jobs when they were replaced by the new machines. Moreover, those workers who did not lose their jobs did not see their real wages rise for decades although their productivity improved substantially (see the graph showing the slow rise in wages between 1800 and 1860).3 On the other hand the wages of workers with greater technological skills did not rise either, in spite of the advantage represented by such skills during the era of industrialisation (known as the wage skill premium effect).4

Joel Mokyr, an expert in economic history from the US University of Northwestern, suggests that the role of institutions may be the reason for this failure to pass on improvements in productivity to wages.5 He mentions, for example, traditions such as farm workers having to use their master's mill or the mercantilism system itself as practices that allowed just a few people to benefit from the income generated via technological progress. In this respect it is notable how institutional reforms, which helped to eliminate the monopolies and privileges hindering competition, provided the right environment for a better distribution of income and ensured sustained technological progress.

The reduction of the labour share of income (compared with the capital share) in most advanced countries over the last few decades is presented as proof of the impact on the labour market of today's technological advances, as well as the need for institutional change to check this trend (see the article «How to take advantage of the positive impact of technological change on employment?» in this Dossier to find out more about the institutional actions proposed as a result of the current revolution). However, it is important to note that technology alone may not have caused this labour share reduction. Among other elements of note is globalisation (with the entrance of workers from poor countries into the labour market of rich countries via trade and offshoring) or the trade unions' loss of power.6

The effect of automation on the polarisation of workers' wages, however, does seem to be a phenomenon where there is greater consensus among experts. The fact that today's robots are capable of substituting professionals with intermediate skills and medium level wages might be an important factor that explains the increase in such polarisation. Nonetheless, in this aspect elements such as globalisation once again come to the fore, causing the same kind of dichotomy in wages.

In summary, it is complicated to predict the effects the machines of the future may have on the world of work as we understand it today. But it does seem likely that, if we create them, the C-3POs and R2-D2s of tomorrow will aim to make our lives more comfortable. Nonetheless, adjustments made during this process of global improvement could be important for those workers more directly affected by the competition represented by machines that can do their work. We therefore need institutions that promote technological development without ignoring the people that might be negatively affected in the short term.

2. As from the Industrial Revolution there were significant advances in GDP per capita, according to estimates by Angus Maddison. 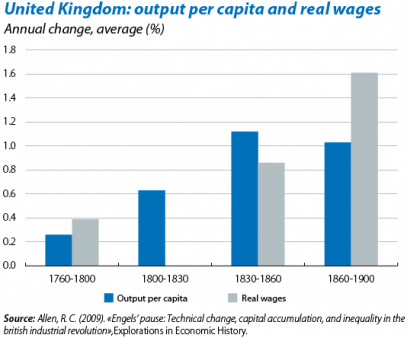