How does the type of employment contract affect productivity?

The proportion of employees with temporary contracts in Spain, standing at 26.2% in 2015 Q3, almost doubles the average rate for the European Union of 14.8% and is one of the particular features of the Spanish labour market that has a negative effect on its productivity.1 The type of employment contract affects productivity in two ways: investment in training by employers and the incentive to work by employees. Productivity increases as human capital is accumulated and workers make more effort.

Let us start with the first channel, namely investment in human capital depending on the type of employment contract. An analysis of the Spanish case based on the country's Labour Force Survey shows that workers on temporary contracts receive less informal training from the company than those on a permanent contract, reducing their professional development and ultimately their productivity (see the first graph). Specifically, in 2014 3.7% of salaried workers with temporary contracts had carried out informal training during the previous four weeks compared with 6.2% of salaried workers with permanent contracts.2 It should be noted that the main aim of the training received by most employees was related to the job they were doing.

Another sign that employees with temporary contracts accumulate less human capital is provided by the findings of the OECD's survey of adult skills: workers on temporary contracts in Spain use fewer skills3 in their jobs than those on permanent contracts, even after taking differences into account regarding educational level and job (see the second graph).4 Moreover, this differential in the use of skills between different types of contract is greater in Spain than in the OECD as a whole, suggesting important consequences of the dual nature of the labour market, which is greater in Spain's case.

The second channel, namely the relationship between effort and productivity according to the type of contract, is less evident. For example, not all temporary contracts have the same effect on effort. When a contract is temporary for recruitment purposes (i.e. during a trial period before becoming permanent), workers would be more motivated to make an effort because they would perceive a greater chance of getting a permanent contract. However, empirical evidence shows that this is not the pattern in Spain. Only 21% of salaried workers on temporary contracts manage to get a permanent contract after one year, 56% continue on a temporary contract while the rest become unemployed.5 Consequently most temporary contracts are not for recruitment but only for a specific period of time, a type that leads to less effort as workers assume they will probably lose their job irrespective of their level of dedication. Permanent contracts have differing effects on this variable as well: employees with permanent contracts involving high dismissal costs may have less incentive to make an effort because the probability of them losing their job is not related to their productivity while workers whose permanent contracts involve more moderate dismissal costs probably make more of an effort. In summary, there is still plenty of margin to find contractual formulas that manage to increase investment in training and employee effort, two fundamental ways of improving productivity.

1. One part of this difference can be explained by the larger share in Spain's economy of highly seasonal sectors, such as tourism.

2. The differential in the incidence of training between workers on temporary and on permanent contracts remains once socio-economic factors have been taken into account, such as age and level of education.

3. By way of example, numeracy skills in the job entail the use of numbers, quantities, statistics or mathematics: calculating prices, costs or budgets; use of fractions, decimals or percentages; preparing graphs, tables or diagrams; analysing regression, etc. 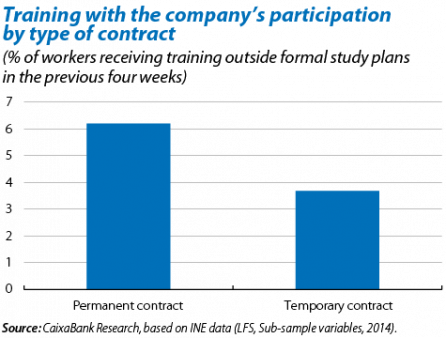 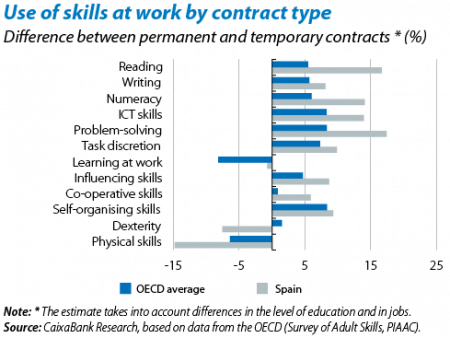