Job polarisation in the euro area

The euro area’s labour market is recovering strongly. The number of people in a job reached the all-time high of 154.8 billion in Q1 2017 while the unemployment rate has been falling for the past four years, down to 9.4% in Q1 2017.

Nevertheless, Europe’s labour market is also increasingly polarised: employment has risen particularly in high-skilled and high-wage occupations1 and also in low-skilled and low-wage occupations. Specifically, between 1995 and 2015 the share of high-skilled jobs out of total employment rose by 8.1 pp and by 3.4 pp for low-skilled jobs. In contrast, the share of middle-skilled jobs fell by 11.5 pp. This polarisation has occurred across all euro area countries, as well as in the US, but to a different extent depending on the country in question (see the first chart).

To understand the factors behind this job polarisation, Acemoglu and Autor,2 among others, have analysed for the US the characteristics of the jobs that have gained and lost share of total employment. They characterised the different tasks involved in each job and the intensity. For instance, depending on whether tasks are routine or not, cognitive or manual, or whether they can be offshored. Finally, they categorised the different jobs according to the tasks carried out in each one.

Carrying out the same exercise for the European labour market, we can see that middle-skilled jobs, which have lost a share of total employment, are typically routine and offshorable (see the second chart). On the other hand, in low and high-skilled jobs, the tasks carried out are mostly non-routine, both cognitive and manual.

These findings are very similar to those for the US, suggesting that job polarisation is at least partly due to global factors. There are two specific factors that play a significant role in polarising employment: globalisation and new technologies. The first of these factors reduces the relative weight of those jobs that are easier to offshore.3 As has already been noted, these jobs tend to be middle-skilled. The impact of new technologies is also greater in jobs where routine tasks are carried out since these can be replaced by robots or computer algorithms. This type of task is also more typical in middle-skilled jobs.4

It is very tempting to conclude that, in order to combat job polarisation, we must implement a protectionist trade policy and penalise technological development, for instance by taxing robots. But although such policies aim to protect a specific section of the population, they would actually end up reducing the well-being of all citizens. Since both open trade and technological progress are beneficial for society as a whole, public policies are necessary to help to distribute these benefits more fairly, with educational, social and labour policies.5

1. Skill refers to the professional abilities required to carry out a job, acquired through training and work experience. Examples of high-skilled jobs are doctors and executive directors; middle-skilled would be office personnel and customer service staff; low-skilled, cleaners or labourers.

3. Blinder, A. (2007), «How Many US Jobs Might be Offshorable?» Princeton University Center for Economic Policy Studies, Working Paper No. 142. 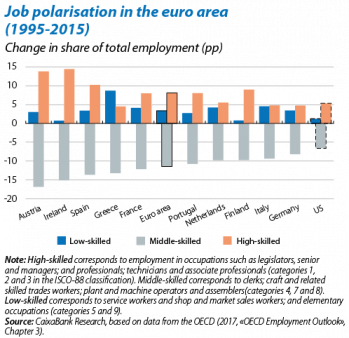 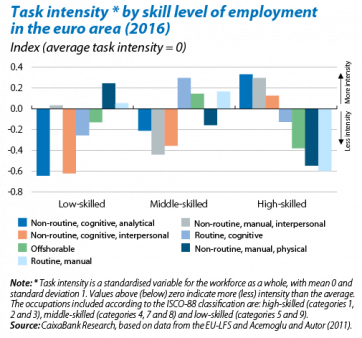