One of the principles established by the European Pillar of Social Rights approved by the European Commission in November 2017 is the right to an adequate minimum-income benefit. As a general rule, social transfers should help to reach this goal. However, this is now more complicated to achieve, due to the changes currently occurring in the labour markets of advanced economies. As a result of this transformation, there is an increasing number of employment relations that provide less social coverage, such as freelancing, part-time and temporary contracts and other atypical labour relations produced by the so-called gig economy.1 Together with a long-term unemployment rate that has remained abnormally high over the past few years, this situation highlights the need to redesign the social transfer system.

Given this wide range of minimum-income benefit schemes and the increasing share of jobs with less social coverage, an alternative proposal which has recently come to the fore is the basic income. Although they may have similar goals, conceptually basic income proposals are very different. A basic income would be universal, received by everyone irrespective of their income. It would also be unconditional; i.e. not requiring anything in exchange, such as looking for employment. Moreover, basic income schemes often aim to replace all other social redistribution programmes and not merely complement them. Such proposals face two considerable obstacles, however. First, they can encourage people not to work and, second, they are very expensive to fund.2

Minimum-income benefit schemes also face several challenges, both in terms of their design and also implementation. Regarding design, the conditions demanded by each scheme might exclude low-income individuals who do not meet the requirements (such as family type). Or, conversely, high-income individuals may be included, a situation which occurs in Mediterranean countries (see the second chart). The fact that the benefit is lost when a job offer is accepted could also discourage potential workers and should be taken into account.
To reduce this effect, the benefit could be withdrawn gradually as employment income rises (similar to introducing a negative tax).3

Regarding implementation, one of the current problems is access to such transfers since a significant number of individuals who are entitled do not claim them (over 50% in some European countries)4 while others receive them although they are not entitled. Neither can we be certain whether many of the current programmes are actually achieving their goal. The first step to improving minimum-income benefit schemes is therefore to thoroughly assess their effectiveness.

1. The gig economy refers to workers using online apps created by intermediary firms to find clients for whom they carry out separate pieces of work. 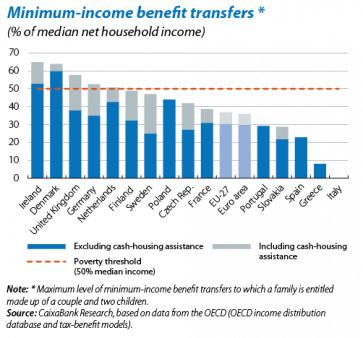 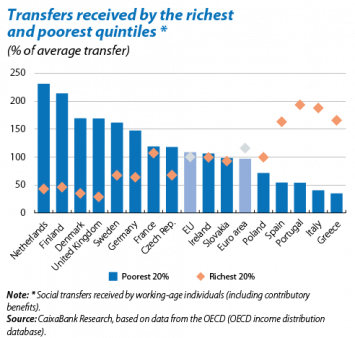