The minimum wage in Spain

On December 2nd, the government approved an 8% rise of the interprofessional minimum wage (SMI in Spanish) for 2017. With this increase, the SMI now stands at 707.6 euros per month with 14 payments per year, 52.4 euros a month more than in 2016. This increase is much higher than what would have resulted from updating the SMI by the CPI, the most widely-used indicator to measure the change in the cost of living, as the inflation forecast for 2017 is 1.7%. In fact, the annual increase in the SMI has been above inflation for the last three years although this has not been enough to regain the purchasing power lost between 2010 and 2013. The increase in 2017, however, will help to reverse this situation and will take the SMI to above the 2009 level in purchasing power terms (see the first graph).

Another comparison that illustrates the evolution of the minimum wage over time consists of comparing it with the trend in the average wage and also the median wage.1 The first graph shows how, since 2009, the SMI increase has been smaller than that of wages. Specifically, the SMI increased by 3.9% in cumulative terms between 2009 and 2015 while average and median wages grew by 5.6% and 10.5%, respectively, over the same period. These data suggest that the SMI has lagged behind the wage trend in the economy as a whole.

The 8% increase approved for the SMI in 2017 will raise Spain’s Kaitz index. By way of example, if the average wage remained constant at 2015’s value, the index would increase to 34% and 40% in comparison with the average and median wage, respectively. Nonetheless, Spain will still rank below other EU countries such as France, Germany, Belgium and Portugal.

The direct effect of this higher minimum wage on labour costs and the rate of job creation will probably be limited as the number of workers that currently receive a wage lower than the SMI passed by the government and therefore those who should see a wage rise is relatively small.4 Ultimately the impact will also depend on whether the increase in the SMI is applied to other salaries although, with unemployment still very high, this effect should be very limited as well.

1. The median is the value of the variable that is in the middle of a range; i.e. in the case of the median wage, 50% of workers receive a lower wage and the remaining 50% a higher wage.

2. Adjusting the data by purchasing power, Spain’s minimum wage ranks 10th out of the 22 EU countries, according to Eurostat data at July 2016. 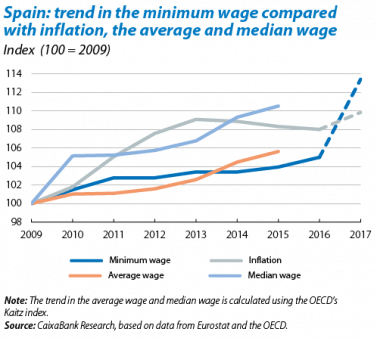