• The pace of job creation fell more sharply than expected in 2019. This, together with the growth of the labour force, is holding back the reduction of the unemployment rate.

• In 2020 the pace of job growth will continue to moderate, but will nonetheless remain considerable, in line with the growth of economic activity.

After four years with increases of around half a million workers per year, the pace of job growth is reducing, both in parallel with and as a result of the slowdown in economic activity. For instance, according to the labour force survey (LFS), employment increased by 1.8% year-on-year between Q4 2018 and Q3 2019 (346,000 workers in the cumulative four-quarter period), below the year-on-year growth experienced between 2015 and 2018 (+2.7% year-on-year on average). In seasonally adjusted terms, the slowdown in employment in Q3 was even more pronounced, with a minimum increase of 0.1% quarter-on-quarter, well below the rate experienced over the past four quarters (+0.6% on average). Besides methodological differences in the LFS, this reduction in the rate of job growth can also be observed in Social Security affiliation,1 the growth of which stood at 2.1% in November (excluding non-professional carers who are registered).

This slowdown in job creation is quite widespread across the various economic sectors. According to the LFS for Q3 2019, employment in the services sector, which accounts for 75.6% of the total, increased by 249,000 people (Q4 2018 - Q3 2019), one third less than in the previous year, despite the third quarter being traditionally strong. Tourism services have been slowing down for several quarters now, but in Q3 2019 non-tourism services also weakened following three quarters of strong recruitment figures. One sub-sector that has seen a particular reduction in recruitment is that of households employing domestic staff (–8.8% year-on-year), which could be more affected by the rise in the minimum wage.

This lower employment growth is occurring in parallel with another, more encouraging trend: after falling between 2013 and 2017, last year the labour force turned a corner and began to grow (+0.3%). In Q3 2019, 235,000 people had joined the labour force (four-quarter cumulative figure), representing a +1% year-on-year increase. This was particularly due to the incorporation of foreign workers (around 200,000 of the total were non-Spanish nationals). Although this figure does not necessarily correspond to inflows of foreigners, both variables show the same change in trend. The foreign migration balance has become positive since 2015, reaching a net inflow of 330,000 in 2018. This is well above the figure for 2017 (+172,000) and contrasts with the net outflows experienced between 2011 and 2014 according to the Migration Statistics (National Statistics Institute).

In 2020 we anticipate a further reduction in the rate of economic activity growth down to 1.5% (compared to the 1.9% estimated for 2019). In this context of economic slowdown there is some uncertainty over the speed of the slowdown in job creation. In previous episodes of economic slowdown in Spain, employment tended to slow down more than in the current one and also more abruptly than in other European economies. That is, the elasticity of employment to economic activity in Spain was higher. However, there is some evidence to suggest that this elasticity could have been reduced, partly due to the greater internal flexibility provided by the labour reform of 2012 and because of the more widespread use of non-standard employment contracts (part-time, etc.).2,3 As a result, in 2020 employment can be expected to continue to grow at a similar rate to economic activity (+1.4%, according to our forecasts). This moderate rise in employment, together with the anticipated increase in the labour force (+0.8%), should allow the unemployment rate to continue to decline, albeit at a slower pace, reaching 13.6% in 2020.

1. For more information on the differences between these sources of data on the labour market, see the article «The labour market in Spain - does it all depend on the colour of the glass you’re looking through?» in the MR10/2018.

2. For more detail on the case of Spain, see the article «Strong recovery in employment: explanatory factors» in the MR07/2018.

3. Employment is also proving more resistant than in other periods of slowdown in Germany, France and Italy (for more details, see https://blog.funcas.es/el-empleo-dique-de-contencion-ante-una-recesion/). 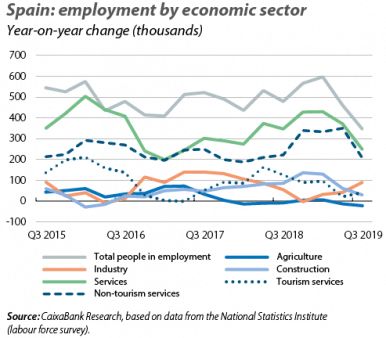