Spanish labour competitiveness: a history of ups and downs

• The improved competitiveness of Spanish labour has played a key role in making Spain one of the fastest-growing countries in the euro area in recent years.

• While Spain’s competitiveness deteriorated in the period 2001-2008 due to wages growing well above productivity, over the next 10 years the country managed to recover lost ground.

• Despite the good performance of recent years, we should not forget that achieving further improvements in competitiveness remains crucial in order to continue to reduce imbalances and to ensure a more sustainable pattern of growth.

The improvement in labour competitiveness has been one of the hallmarks of the Spanish economy over the last decade. Nevertheless, as the economy enters a more mature phase of the cycle, the question arises as to whether this improvement was the result of temporary factors linked to the economic cycle or an underlying change in the Spanish economy. Below, we analyse this question based on recent developments in the main factors that determine labour competitiveness: workers’ earnings and their productivity.

Changes in labour competitiveness in Spain and the euro area

In a monetary union, one of the key factors determining the competitiveness of its members is the cost of labour required to produce each good and service. So, if a country in the euro area experiences a sustained increase in its unit labour costs (ULC)1 above all the other countries (either due to higher wage growth or a slowdown in productivity), it loses competitiveness, without having the ability to resort to a devaluation of its currency in order to regain it. As shown in the first chart, in the last 20 years, Spain’s competitiveness2 has gone through two very different phases: up until early 2008 there was a sustained loss of competitiveness compared to the rest of the euro area, while since then there has been a recovery.

In particular, up until 2008 Spain’s ULC increased far faster than those of the rest of the euro area. This was caused by wage growth per employee in the Spanish economy as a whole (3.5% annually on average between 2001 and 2008) growing at a significantly higher rate than labour productivity (0.1%). This dynamic changed with the recession, when the initial increase in productivity (due to employment falling by more than GDP) and more contained wage growth, especially from 2010, resulted in a decrease in ULC and led to a phase marked by a recovery in competitiveness. This recovery was particularly notable up until 2013 and, since then, Spain has continued to improve its competitiveness relative to the rest of the euro area, albeit at a more gradual pace.

The importance of the link between earnings and productivity

As we mentioned earlier, the evolution of the ULC reflects the relationship between the growth in earnings per employee and that of labour productivity. For example, it is possible to combine a containment of ULC with a rise in earnings, provided that there is growth in labour productivity. As can be seen in the second chart, which breaks down the changes in these two components of the ULC, the initial years of Spain’s recovery (2014-2016) were characterised by a closer link between wage growth and that of productivity. In fact, the two were very even and allowed ULC to remain practically stable (in stark contrast to the period 2001-2008, in which there was a stark misalignment between the evolution of wages and productivity). Furthermore, although recently Spain’s ULC have begun to rise for the first time in the past 10 years (in nominal terms),3 they remain below those of the euro area (i.e. Spain continues to regain competitiveness). What is more, there continues to be a closer link between wage growth and that of productivity. The ULC of the euro area as a whole, meanwhile, have also risen in recent years and, as can be seen in the second chart, the euro area has maintained a balance between wage growth and productivity similar to that seen during the previous expansion.

In short, beyond the initial impact of the recession, in recent years the Spanish economy has continued to regain competitiveness vis-à-vis the euro area, and it has done so with a better link between the evolution of workers’ wages and productivity. Over the coming quarters, the good performance of the labour market is expected to be reflected in more dynamic wages. Although this will probably have only a moderate impact on inflation, especially in comparison with the previous expansionary phase,4 its impact on competitiveness will depend on whether a close link is maintained between wage growth and that of productivity. Therefore, and in view of the fact that productivity has seen limited growth in recent years, we must not forget that improving competitiveness remains key in order to continue to reduce imbalances (such as external debt) and to ensure a more sustainable pattern of growth going forward.

2. Understood as the ratio between the ULC of Spain and the average for the euro area.

3. An expected trend, given the strong job creation and the marked reduction in unemployment that has been observed in the Spanish labour market in recent years. For example, according to the most recent labour force survey (Q1 2019), in the last year employment has increased by around 600,000 workers, while unemployment has fallen by almost 450,000 people. 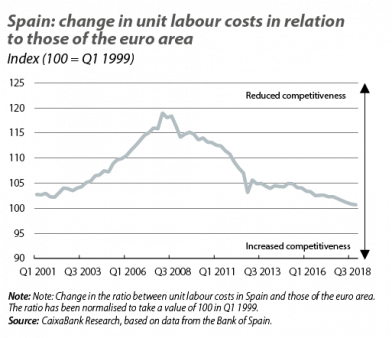 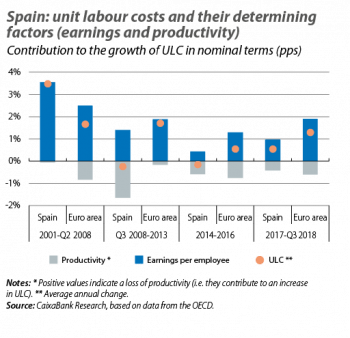