Technology and wealth: two phenomena working for or against workers?

The drop in the labour share of national income is a phenomenon that is worthy of closer inspection: it has been observed for a long time, affects most developed countries and sectors and is loaded with significant implications, both economic (efficiency) and political (equity). It therefore comes as no surprise that this has given rise to a very large number of studies attempting to identify its causes. The list of factors put forward is long and varied, although the following stand out: trade unions' loss of power, the shock caused by poor countries in the labour market of richer countries through offshoring and other forces resulting from globalisation, weaker competition in the markets of goods and services, technological improvements and the degree of development achieved by the country in question. In this article we will focus on these last two factors, insofar as they share a paradoxical circumstance: a priori positive aspects (technological progress and forming part of an economically mature country) could be working against workers, at least in terms of the distribution of the economic «cake» (in other words, GDP).

Technological change is the usual suspect when economists look for something to blame for long-range phenomena, such as the case in point. But apportioning blame requires two elements to be convincing. Firstly, the existence of a «motive». In other words, logical arguments that make economic sense of the mechanisms and channels by which technological change can lead to a decline in the labour share. Second, the provision of «material proof». In other words, data that confirm such a relationship with enough statistical significance and economic relevance. A recent study by L. Karabarbounis and B. Neiman represents a landmark in such an undertaking.(1)

It is not easy to identify a «motive». According to standard economic theory, the impact of technological change on the labour share is not unequivocally positive or negative ex ante but depends on many different aspects: the nature of the technological progress taking place, how it affects the productivity of the different productive factors (capital and labour) or to what extent these are subsitutes or complements. In fact, the result can vary depending on how many factors are considered (in particular, the segmentation of workers according to their qualifications) and the timescale. Karabarbounis and Neiman choose to limit the problem to observing a circumstance they believe to be crucial: the price of capital goods (in particular, machinery) has fallen compared with the price of consumer goods, accumulating 25% over the last three decades at an international level. Their line of argument is as follows: the progress made in information and communication technologies, in computing, in robotics, etc. has lowered the relative price of capital goods. This has been a powerful incentive for firms to undertake a sustained process of substituting labour for capital. Ultimately, the drive resulting from this process has dominated over other forces, leading to the decline in the labour share.

However, other considerations also need to be taken into account. On the one hand, although robotics involve the loss of certain jobs, this could also result in better salaries insofar as a more advanced machine would increase the productivity of workers — those keeping their jobs, of course. On the other hand, technological progress per se (whether biased towards capital or not) increases the GDP or size of the cake to be distributed, which is undoubtedly positive (notwithstanding distribution-related aspects). Similarly, in practice, the assumed substitutability of capital and labour taken as axiomatic by numerous empirical studies is questionable, to say the least. This is particularly the case when talking about high-skill workers. In this respect, as the share of the workforce represented by this kind of worker gradually increases in a country, the negative relationship between capital-biased technological progress and the labour share could be broken.

Returning to the recent study by Karabarbounis and Neiman, the empirical evidence provided comes from a new database with records since 1975 for 59 countries, broken down by industry and largely free from the usual measurement problems for this type of study. Their main conclusion is that the relative cheapening of capital goods lies behind approximately one half of the drop observed in the labour share for the sample as a whole. Other studies, with different conceptual approaches and methodologies, have also found a statistically and economically significant role for technological factors. A report published by the OECD in 2012 estimates that technological change and capital accumulation can explain, on average, 80% of the intrasector change in the labour share in seven developed countries during the period 1990-2007.(2) Naturally there are studies that question this relationship but, on the whole, the evidence tends to assign technological change a relevant role.(3)

Another, quite different line of research, proposed by the economist Thomas Piketty,(4) looks at a much less usual suspect to explain the decline in the labour share: belonging to a rich, mature country. His reasoning refers to the fundamental workings of capitalism in advanced countries to emphasise a key element: when a country has high and sustained GDP growth rates (either because of improvements in productivity or due to demographic dynamism), the rich of today are relatively less likely to be the rich of tomorrow. However, when an economy's growth rate is low and wealth accumulation (understood as capital) is high, then today's distribution of wealth greatly affects that of the future, so that the heirs of the capitalists of today will be the capitalists of tomorrow. According to Piketty, the most advanced market economies (i.e. the USA, Western Europe and similar countries) have achieved this consolidation. Their rates of economic growth are limited because they are already at the frontier of technological progress (thanks to improvements in the past) and demography is stable or even downward. Without making value judgements on the implications regarding the transmission of wealth, the author simply warns that, if there is no mechanism of redistribution, this dynamic will continue over time.

Piketty presents a relationship and condition that endorse the importance of capital «inheritance» in determining the rich of tomorrow. The former states that the capital share is equal to the return on capital multiplied by the ratio between capital and GDP. Here there can be no room for controversy as this is a simple definition. One extra condition, which is crucial, establishes that, in the present and also in the future, the return on capital must be higher than the economy's growth rate. Consequently, if economic growth is low and capital is in the hands of a few individuals, even if someone works hard all their life it will be very difficult for them to save enough to compete with the wealth already possessed by the contemporary «rich» or capitalists. The reason is that wages can only grow at a slow pace, below the already modest growth in GDP, given that the return on capital is greater than the economy's growth. The result is that the capital share tends to increase and the labour share to fall.

Nonetheless, the assumption that the return on capital will remain at high levels over several years sounds unnatural. In particular, the fact that the ratio between capital and GDP continues growing over time means that the capital factor is increasingly abundant. However, the payment for capital (the return) remaining high at the same time contradicts the law of diminishing returns. A second, notable criticism refers to the growing relevance of human capital in advanced economies. The term «human capital» refers to the training and knowledge acquired by workers. Use of the word «capital» to refer to a quality of workers is not unjustified as it connotes a certain parallelism with capital in its more classic version (namely machinery), although human capital is less susceptible to diminishing returns. Piketty himself mentions that the definition of capital has varied over the centuries and that, while it currently refers mostly to machinery, in the past it also included slaves. Hence, maybe in the not too distant future, human capital will be as important as a capital element as the machinery of today? If this were the case, we should only be concerned about equal opportunities in education and training so that those making the most effort to train themselves, notwithstanding their innate capacity, would be the rich of the future.

In short, both the usual suspect (technological progress) and the not so usual suspect (wealth accumulation) share more than just a pleasant face that hides an ulterior motive: their influence on the distribution of the «extra portion of cake» seems to revolve around education. A trained workforce will be capable of taking advantage of technological improvements as well as compensating individual effort fairly. The rich will not survive in a world where human capital is the main source of wealth.

(3) See Samuel Bentolila and Gilles Saint-Paul (2003, «Explaining Movements in the Labor Share», The B. E. Journal of Macroeconomics, De Gruyter, Vol. 3(1), pages 1-33) as another example that highlights the importance of technological progress in the decline in the labour share. 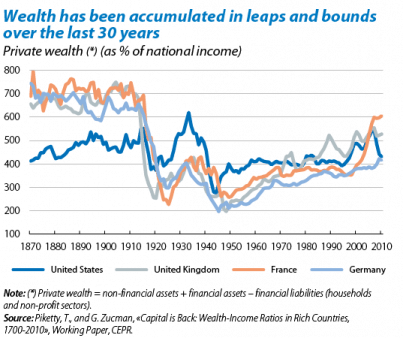