Weighing up the labour market

The pace of job creation was very strong in 2016 Q2. According to Spain’s Labour Force Survey (LFS), the number of employees increased by 271,000, a very positive figure but somewhat lower than expected after the number of registered workers affiliated to Social Security had risen more than expected between April and June, namely by 436,000. The notable difference between these two figures is not a temporary phenomenon of 2016 Q2. In fact, since employment started to recover in 2014 Q1, the trend for workers registered with Social Security has been more favourable than that for LFS employees. Specifically, between January 2014 and June 2016 the cumulative growth in affiliated employment was 9.8%, almost 2 pps higher than the growth in LFS employment (8.0%) (see the first graph).

Such differences between both series are customary as, for instance, the two data sets have very different sources: the LFS is based on a survey using a representative sample of the population while the data on affiliated workers come from an administrative register that records the workers registered with Social Security. Another difference between both sources is how the shadow economy is handled. In other words, some people are in employment but not affiliated to Social Security so that, when they are surveyed by the LFS, they are considered to be in employment. This reason for the discrepancy between the two series could become even more relevant during a phase of economic expansion when shadow economy jobs tend to shift towards the formal economy. As workers are given an employment contract, they would be entered in the Social Security registers while, for LFS purposes, they would already be counted as employed.

In summary, the most recent data regarding job creation show that the labour market is recovering at a good rate. Moreover, the analysis presented in this Focus suggests this recovery may be accompanied by an increase in formal employment.

1. The estimated share of the shadow economy by sector at a European level is obtained from Schneider, F., 2013, «The Shadow Economy in Europe 2013», A. T. Kearney and Visa. 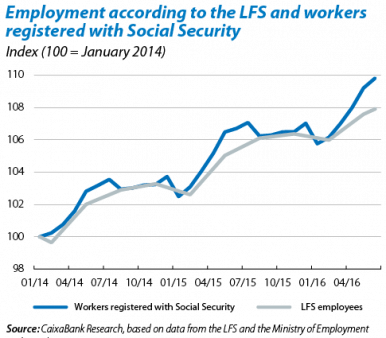 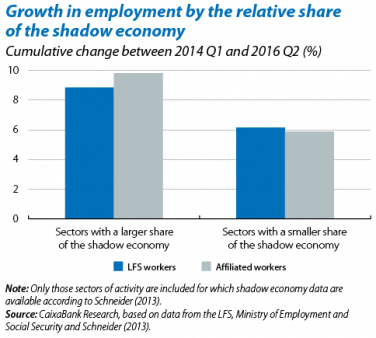