To date, the Federal Reserve (Fed) has normalized monetary conditions by adjusting the federal funds rate. The financial community has therefore tended to focus on interest rates when it comes to the Fed’s monetary policy. The Fed’s second major monetary tool, its balance sheet, has remained on the sidelines. But this could be about to change.

So far the signals provided by the Fed have been few and far-between. In its Policy Normalization Principles and Plans published in September 2014, the monetary authority stated that it would shrink its balance sheet by ceasing or phasing out reinvestments. Since December 2015, however, FOMC communications have indicated this would not be carried out «until normalization of the level of the federal funds rate is well under way». Although this statement is rather ambiguous, market consensus places the threshold at around 1.50%. According to fed funds futures, this would be reached by Q1 2018, and by Q4 2017 according to CaixaBank Research. The Fed is therefore likely to announce it is stopping reinvestments towards the end of this year.

Less certain, if that is possible, is the form this reduction will take and the ultimate size of the balance sheet. The projection carried out by the New York Fed, one of the few official references available, highlights two key aspects: the gradual nature of this normalization, which would end in 2022, and the size of the balance sheet at that time, around USD 2.3 trillion.

Although this issue is still far from certain, there is good reason to believe that the Fed will start to normalize its balance sheet. First, the fact that credit has been flowing normally for several years now. This means the Fed no longer needs to intervene so directly by buying up debt securities. Second, the improvement in macroeconomic conditions and in particular higher inflation make gradual monetary normalization necessary and, in part, this entails higher long-term interest rates. On the other hand, one of the Fed’s aims with QE was to reduce these once the federal funds rate reached zero lower bound. In short, full monetary normalization requires an environment in which market forces once again play a key role in fixing interest rates and it is vital for the Fed to reduce its presence in debt markets.

However, managing the balance sheet also involves risks, not so much due to operational complications but to communication problems. In effect, forward guidance regarding the balance sheet, be it expansionary or contractive, can trigger sharp fluctuations and destabilize some asset markets. Specifically, bond market agents could have a mistaken or biased view of changes in the central bank’s interest rate policy if communication is not sufficiently clear and concise. The events of spring 2013 provide a clear example of how this pass-through mechanism works for unconventional monetary policy, also known as the signalling effect.1 The pre-announcement of tapering by the Fed Chairman at that time, B. S. Bernanke, triggered sharp increases in long-term US interest rates and greatly disrupted emerging markets. On this occasion, the Fed will be very careful to avoid any repetition of such events. It will therefore have to specify precisely the key aspects of how it will cease reinvestments from the time this is announced. Namely, the scope (some or all bonds), the pace or timings (all in one go or phased) and, ideally, the size of the balance sheet the Fed intends to achieve.

1. For an instructive explanation of the different pass-through mechanisms for unconventional monetary policy, see Bernanke, B. S. (2012), «Monetary Policy since the Onset of the Crisis». 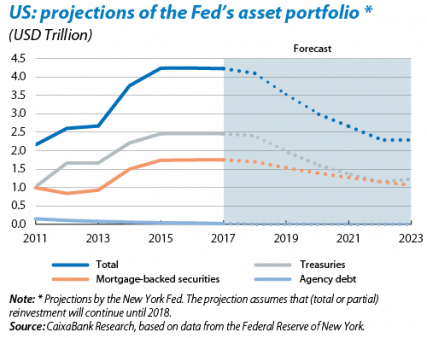