Human beings love cycles. Whether vital, historical, political... or even in football. If you don’t believe us, just ask all the coaches who have been dismissed with a trite «He had reached the end of his cycle». Economists, believe it or not, are also human and we are no exception. Real business cycles (i.e. the ups and downs in the production of goods and services) were the main focus of our studies for decades. However, following the 2008 financial crisis, we realised that it was not possible to analyse the macro-financial cycle without taking financial factors into account, and this gave rise to a new concept: the financial cycle.

While there is no universal definition of the financial cycle, the expression denotes how interactions between economic and financial players’ perceptions and attitudes towards risk, coupled with the financing and credit conditions in the economy, end up generating cycles of boom and bust in the main financial variables. Today, a distinction is made between the domestic financial cycle and the global financial cycle, to the point that the economist from the Bank for International Settlements (BIS) Claudio Borio1 speaks of a «tale of two cycles», paraphrasing the great Charles Dickens.

The domestic financial cycle is characterised by the evolution of credit and housing prices: credit provides a good description of the restrictions in access to financing for households and businesses, while prices reflect economic and financial players’ perceptions of the value of their assets, as well as the risk associated with them.

In his seminal article on the financial cycle,2 Borio combined the information on these two variables in the US to obtain a measure of the financial cycle. As can be seen in the first chart, the resulting cycle lasts longer than the real business cycle. Moreover, it has lengthened over the years. Furthermore, the peaks of the financial cycle occur close to the outbreak of financial crises of a domestic origin, something common to the rest of advanced economies. The reason for this is that, during boom periods, the risk incurred by economic and financial players increases, and this amplifies the credit boom and the rise in asset prices, in what is the prelude to a future crisis. In other words, the seeds of crises are sown during the booms of the financial cycle!

Of course, the characteristics of the financial cycle do not fall from the sky. What, then, do they depend on? Three main factors have been identified, namely: the financial system, monetary policy and the economic-institutional system. With respect to the first factor, the financial liberalisation that has occurred in recent decades has facilitated access to credit but, at the same time, it has also made the financial cycle more sensitive to players’ attitude to risk. Monetary policy is also key. Indeed, in the following articles we will explore its role in detail. Here we will limit ourselves to saying that a monetary policy that is solely focused on controlling inflation would not act to address financial booms occurring in a context of low inflation (nevertheless, there are monetary policy alternatives that can correct the excesses of the financial cycle). Finally, with regard to the economic-institutional system, economic reforms that enhance countries’ growth potential can generate changes in lending patterns and in the behaviour of the main financial variables.

The other financial cycle that we have to keep in mind is the global one. Whereas the domestic financial cycle is focused on detecting macrofinancial imbalances that are specific to each economy, the global cycle refers to the financial factors that are generated in the world’s major financial hubs - mainly the US - and how these are transmitted to the rest of the world through capital flows and financial asset prices. The economists Hélène Rey and Silvia Miranda-Agrippino4 were the first to detect that there was a common factor that accounted for 25% of the movement of risk-bearing financial assets. Subsequently, it was noted that this factor also explained around one-quarter of gross capital flows.

What lies behind this common factor that describes the global financial cycle? It is risk appetite, a variable that tends to align with the VIX, the index that calculates the implicit volatility of options on the shares that make up the S&P 500 index. The lower the VIX, the greater the degree of complacency and risk appetite prevailing in the markets, which accelerates the growth of credit and generates an increase in asset prices. It is worth clarifying that the relationship between the global financial cycle and the VIX has weakened following the 2008 financial crisis (see second chart), possibly because many global banks reduced their international positions. Let us recall, for instance, that European banks had amassed abundant liquidity in dollars before the crisis.

On the other hand, the global financial cycle is closely related to US monetary policy: changes in this policy affect investors’ expectations and, therefore, the VIX. Such changes end up being transmitted to all other economies (even those with a domestic cycle that substantially differs from that of the US) through international capital flows, which in turn affects the leverage of the big banks and the growth of aggregate global credit.

It should also be noted that the global financial cycle has important implications for economic policy: traditionally, macroeconomics supported the view that independent domestic monetary policies could only be achieved, in the presence of perfectly mobile capital, with flexible exchange rates (the renowned trilemma, or impossible trinity, of international macroeconomics). However, the existence of a global financial cycle has disrupted this traditional view: the financial conditions of the main global financial hubs are transmitted to the macrofinancial conditions of all other countries, such that domestic monetary policy cannot be fully independent, even if the exchange rate is flexible.5 As an example, in recent years, with advanced economies in a context of low returns, the abundance of liquidity has been directed towards other neighbouring economies. In order to avoid sudden appreciations of their currencies and to contain capital inflows, these other economies have relaxed their monetary conditions, implementing interest rates lower than what would be justified by their domestic needs. Therefore, the only way to achieve an independent monetary policy is with policies that influence capital flows (i.e. shifting from the trilemma to a simple dilemma). Among others, these include cyclical macroprudential policies that limit the growth of credit and leverage during boom periods, or structural policies that place a cap on leverage and reduce intermediaries’ procyclical nature.

In short, the existence of a dual financial cycle (domestic and global) is unquestionable. As such, studying the main macrofinancial variables (such as the natural rate of interest), business cycles and monetary policy itself, without taking the existence of this cycle into account, would be akin to attending a concert without music. For this reason, in the following articles of this Dossier we will focus on the financial cycle (or, continuing with the analogy, we will bring the music) in order to understand its impact on the economy. 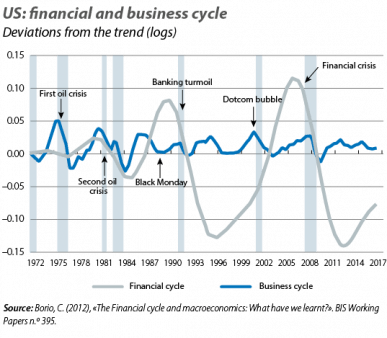 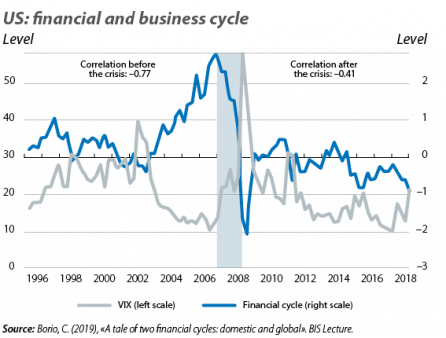