Policies to coordinate the monetary and financial system

Very aggressive expansionary monetary policies have been implemented in the advanced economies after the economic and financial crisis of 2008, crucial in order to alleviate the impact of the crisis. However, as documented in the rest of the articles in this Dossier, the effects of these policies have been felt beyond the borders of each particular country, highlighting the need to improve the coordination of economic policy at an international and especially a monetary level. Such a challenge is not new but seems to be increasingly necessary.

Looking back in time, the Bretton Woods agreements were created in 1944 after the Great Depression of the 1930s and two devastating World Wars. These paved the way for an international monetary and financial system based, among others elements, on a system of fixed exchange rates. The aim was to prevent competitive devaluations. This system lasted for 27 years until Richard Nixon decided to end dollar convertibility to gold in 1971. In spite of the far-reaching change this decision represented, the coordination of monetary policy was not a central issue in the debate as the economy was not globalised and monetary policies were carried out by increasingly independent central banks that did not try to promote competitive devaluations but rather focused on price stability.

So what has changed in the last few years to make the coordination of central banks more necessary? As noted in the articles «Monetary policy: from independence to interdependence» and «Bank globalisation and the international transmission of monetary policy» in this Dossier, financial globalisation and the growing importance of global banks mean that the monetary policy implemented by the main central banks now has a much greater effect on the rest of the economies. The quantitative easing employed by the main monetary authorities also has a greater impact on the rest of the economies.

Nevertheless, progress in the international coordination of monetary policy has been very specific in nature, in response to the needs of the time. For example, after the subprime crisis in 2008 the Fed made 620 billion dollars available to the central banks of 12 countries in the form of swaps to provide them with liquidity (see the first graph). Similarly, in 2009 the G-20 countries decided to coordinate their response to the crisis through the Financial Stability Board and, at the same time, the International Monetary Fund (IMF) strengthened its multilateral supervisory mechanisms. There is currently a de facto two-headed structure for the cooperation of macroeconomic and financial policy at a global level, with the IMF providing general recommendations for coordination policies and the G-20 taking strategic decisions in times of crisis.

One of the keys to improving coordination lies in a better understanding and more precise measurement of the external effects caused by monetary policy. This is an arduous task, however. For example, and as we can see in the second graph, the impact of US monetary policies on credit growth abroad differs depending on each country’s characteristics, with less of an effect if the country is developed, has a flexible exchange rate or is not very open to foreign capital. This graph highlights the importance of taking considerably complex macroeconomic factors into account when designing coordination mechanisms. With the aim of making progress in this area, economists Raghuram Rajan and Prachi Mishra1 have proposed the creation of an expert committee to classify the specific monetary policies of different countries into three categories: green, orange and red. The first are beneficial policies that entail gains for all countries while orange are policies that should be used with caution and only in the short-term, and red are those domestic policies with a very low positive impact in the country promoting them but which severely damage other countries. An example of a red policy would be unconventional monetary policies resulting in a weak recovery in the developed economy implementing them but causing huge financial instability in the emerging countries. Rajan and Mishra’s proposal is ambitious because, as acknowledged by its authors, the aim would be to classify the specific monetary policies observed in reality instead of abstractly giving a number of recommendations. To this end, an analytical framework would be required to evaluate the external effects of these policies, also taking into account their effects over time. Once each policy has been classified, the idea would be to favour green policies while attempting to end red policies.

However, appropriate institutional mechanisms also need to be designed for these measures to be carried out effectively. Since achieving a high degree of cooperation between central banks is not realistic and could even harm their credibility at a domestic level,2 it seems obvious that the necessary coordination can only be brought about through a strong supranational body responsible for multilateral coordination, which could draw up a series of guidelines, recommendations and warnings on policy design to avoid the negative externalities of domestic policies. This body should be capable of thoroughly evaluating the consequences of the domestic monetary and financial policies in question for other countries and act as a neutral third party in order to advise and guide the different countries to improve the coordination of monetary and financial policies.

Two natural candidates to take on this role are the IMF and the Bank for International Settlements (BIS). If the IMF wishes to take on this role then it would have to become more active since it currently lacks a clear mandate to tackle the implications of its members’ domestic policies for global financial stability,3 and it should also become independent from governmental powers. The other candidate is the BIS, the body known as the «central banks’ bank», which was founded by the Hague Agreements in 1930. This institution is responsible for promoting financial and monetary cooperation and is owned by numerous central banks. For this reason, the BIS might be in a prime position to facilitate the coordination of various central banks and take on a dominant role in the international coordination of monetary policies. Moreover, it also enjoys a solid international reputation and would help central banks remain independent. It should be added that several observers4 have suggested the G-20 could also take on the role of coordinating monetary policy. However, the G-20 does not seem the ideal candidate as it is a political and not a technical forum and suffers from problems of representativeness.

By way of conclusion, it should be noted that there is widespread consensus in the international community regarding the need for greater coordination in international monetary and financial policies. However, there are also reasonable doubts as to whether any progress can be made in this area. The short-term focus of monetary authorities, the difficulties of getting different countries with diverging interests to agree and the challenges posed by a modification of the current monetary and financial architecture at a global level are not encouraging signals. As Olivier Blanchard5 said in 2013, when he was Chief Economist of the IMF, «International policy coordination is like the Loch Ness monster: much discussed but rarely seen». 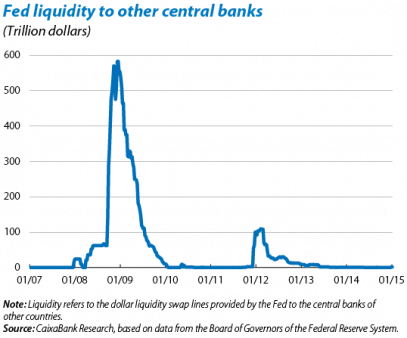 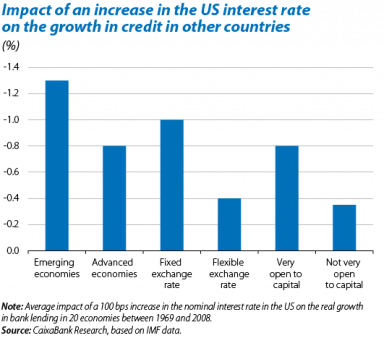