In times of crisis, monetary creativity

Einstein said that, in times of crisis, only «imagination is more important than knowledge»; a maxim that the main central banks on both sides of the Atlantic and Pacific have certainly taken to heart. The severity of the crisis, lack of fiscal space and little room to manoeuvre via traditional channels has pushed them to search for new ways both to placate financial turbulences and stimulate their weakened economies.

Under normal circumstances, in the face of economic anaemia or risks due to deflation (leaving the turbulences to one side), the monetary policy committee would resort to its «conventional» toolbox to fulfill its customary precept: price stability and, in certain cases such as that of the United States' Federal Reserve (Fed), also an acceptable level of employment. In this box, the main tool is the very short-term reference interest rate: the Fed carries out open market operations by purchasing public debt on the secondary market to affect the interbank rate and bring it close to this reference rate; the ECB does the same via short-term auctions or main refinancing operations. The aim is to affect a series of intermediate targets (monetary aggregates and the interest rate curve, both in interbank and sovereign debt markets) so that they might spur on the central bank's ultimate targets: employment and/or prices.

Nonetheless, recent circumstances are far from being normal. To begin with, financial tensions at the start of the crisis stopped credit markets from functioning properly, forcing most central banks of the large advanced economies to take on their role as a lender of last resort and inject liquidity into the banking system. Moreover, the size and length of the crisis forced these same central banks to lower the reference interest rate to almost zero, closing the door to greater stimuli in this area and underlining this instrument's limitations as the only monetary policy tool. This is known as the liquidity trap, when conventional monetary policy loses its ability to affect the economic cycle.

But we must add another drawback to this trap: the disruption of the transmission channel between operations-based instruments and the aforementioned intermediate targets. Neither massive injections of liquidity nor lax monetary policy have managed to unleash this channel, due largely to persistent dysfunctions in credit markets. These, in turn, are attributed to difficulties in the financial system; risk aversion; overly pessimistic future economic expectations; and the private sector's need to deleverage, all made worse, in Europe's case, by convertibility risk. If this channel does not have enough fluidity, monetary policy measures fail to affect their ultimate targets sufficiently; which partly explains why the considerable reductions in the short-term interest rate have not had a greater effect on economic activity.

In such a dilemma, given the exceptional nature of the crisis and when the usual monetary policy tools are not achieving their aim (because they have run out of steam or because they are not working as they should), a new battery of «unconventional» measures comes onto the scene. In particular, using the central bank balance sheet (size and composition), and careful communication of medium-term monetary policy strategy (forward policy guidance).

The essence of both strategies is based on the following premise: the interest rate that actually determines spending decisions is the long-term real interest rate (nominal rate minus inflation expectations). Consequently, although the short-term nominal interest rate may be zero, monetary policy would still have enough margin to affect aggregate demand (and therefore prices and employment) via inflation expectations or via the long-term nominal rate.(1) One way of managing to lower the real interest rate by driving inflation expectations consists of deliberately embarking on a markedly expansionary course, promising (credibly) to maintain a low nominal interest rate in the future. How? By announcing a sufficiently high inflation target over a prolonged period of time or by reinforcing this inflation commitment (which might suffer from a lack of credibility) by vastly expanding the central bank's balance sheet, which might tie it down to some extent in the future. Paraphrasing Paul Krugman, the central bank needs to credibly promise to be irresponsible.

So although it has already become customary for monetary authorities to explain both their objectives and their future intentions, a lot more details have been provided recently. This more detailed communication aims to modify the market's expectations so that they expect interest rates to remain low for a long period of time, helping to reduce real long-term interest rates. By way of example, when the Fed announced, in August 2011, that it would keep the official rate low until mid-2013, the market reacted by dropping the yield on 10-year Treasury bonds by 20 basis points, an effect equivalent to lowering the official interest rate by 75 basis points.(2)

Of course, monetary authorities have also resorted to their second line of unconventional measures: buying up a wide range of financial assets at unprecedented levels (large-scale asset purchases, ASLP). The United States has already carried out three rounds of what has been renamed «Quantitative Easing» (QE), acquiring government and corporate bonds totalling more than 2.4 trillion dollars. The Bank of England (BoE) has also generously opted for QE with a cumulative spend of around 375 billion pounds. For its part, the ECB has been buying up public and private debt totalling around 300 billion euros.

As a result, the balance sheets of the main central banks have expanded and altered extensively (see the graph below). Compared with its pre-crisis size, that of the BoE has grown the most, more than tripling its assets (×3.4). This is followed by the Fed, which has multiplied its assets threefold, while the ECB has doubled its assets. However, although they share their commitment to using new tools, the actions taken by these central banks also reveal significant differences. Whereas the first two quickly implemented their QE policy, the ECB did so much more gradually and moderately, at the beginning resorting to tools that had been available even before the crisis.

In short, the actions taken by the central banks throughout the crisis have been extraordinary. Given the urgent need and unavoidable task of helping their economies get back on the path towards stability and growth, they have not hesitated to resort to relatively unconventional measures even though their inexperience in handling such measures raises relevant doubts (see the boxes «Unconventional monetary policy: an (unfinished) story of (limited) success» and «Risks of a monetary policy in its experimental phase», respectively). Neither have they faltered in fulfilling their role as lenders of last resort, providing the necessary liquidity to preclude financial panic. Nonetheless, beyond this impasse the crisis may have altered the economic paradigm, requiring a rethink of the goals of monetary policy. But that's another story (see the box «New monetary policy targets»). 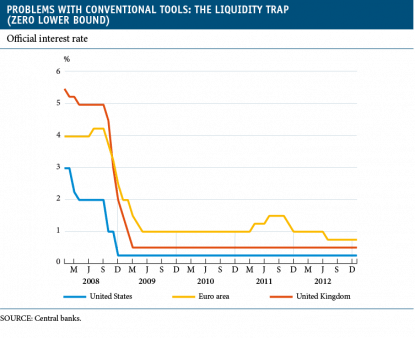 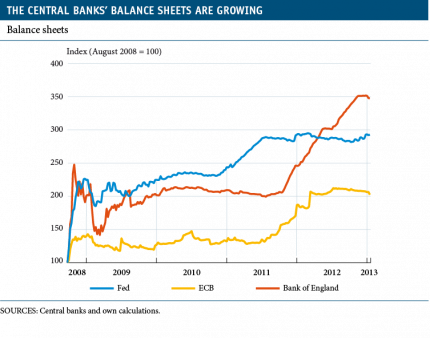