The ultra-easy monetary policy holding sway on both sides of the Atlantic has led to extensive debate on the redistributive effects of keeping interest rates at very low levels for a prolonged period of time. Not all households are affected in the same way: some, generally those most in debt which are also usually the youngest, benefit from low interest rates while others, the savers, are hit hard as they get fewer returns from the interest on their savings.

Changes in interest rates also affect financial revenue. 96.4% of European households have a bank deposit although the size of the return is small compared with the household's total income. For example, on average European households hold 28,623 euros in deposits. A drop of 100 bps in the interest rate on deposits leads to a loss of 286 euros per year, representing 0.6% of an average household's income. The effect is greater for lower-income households as, in spite of having fewer deposits, these account for a greater proportion of their income. Specifically, in this case the reduction in returns would be 93 euros, 0.9% of their annual income.

In short, low interest rates benefit those households and countries most in debt, which means that expansionary monetary policy is helping deleveraging in those households with the greatest difficulty in paying off their debts. Another more difficult issue to determine is how these policies affect household wealth: the low interest rates and the injection of liquidity carried out by the main central banks are pushing up the value of financial and property assets. For example, part of the significant gains in the stock and bond markets could be a result of these policies. In this respect, those households with more assets will benefit the most. However, the empirical evidence available does not allow us to determine which part of these gains in assets is due to ultra-easy monetary policy and which part of such gains is permanent.(1) 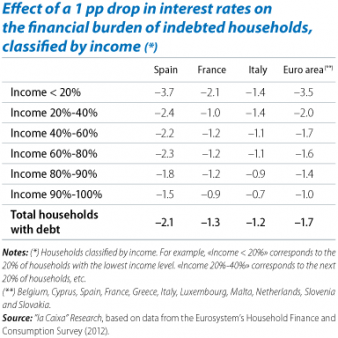