The outlook for the Spanish economy is favourable. Spain’s economy has enjoyed three exceptionally good years, growing at rates above 3%. This growth rate will probably ease in 2018 although it will still be one of the highest in the advanced economies according to all analysts’ forecasts. The CaixaBank Research GDP growth forecast of 2.4% assumes sustained growth in domestic demand, albeit slightly lower than in recent years. The competitiveness gains achieved in recent years, together with the projected positive developments in the global economy, will support the strong performance by exports, at least partially offsetting the expected slowdown in domestic demand.

Growth remains high in the last quarter of the year. The CaixaBank Research GDP forecast predicts 0.7% growth quarter-on-quarter in Q4, very similar to Q3 (0.8% quarter- on-quarter). Overall, the various indicators published over the past month point to a strong growth rate. Supply indicators suggest the economy is still comfortably in the expansionary zone although service sector activity was somewhat weaker at the end of the year. In contrast, manufacturing showed some signs of improvement. Specifically, the services PMI in November stood at 54.4 points, its lowest since January, while manufacturing advanced to 56.1 points and industrial production grew solidly by 4.1% year-on-year in October.

The positive trend in economic activity is reflected in the labour market. This good performance by the Spanish economy has had a very positive impact on the labour market. In the past three years 1.5 million jobs have been created, half those lost during the crisis. The most recent data point to this expansion continuing. In November, the number of workers affiliated to Social Security increased by 3.6% year-on-year. Compared with October, the number fell by 12,773 in November. This tends to happen due to loss of tourism jobs. However, seasonally adjusted data confirm the dynamism of the labour market (+43,437). Looking ahead to 2018, lower GDP growth is expected to reduce the job creation rate slightly. 2.1% growth is forecast (in terms of full-time equivalent jobs), an additional 350,000 jobs. This positive employment trend will also help the unemployment rate to continue falling, down to 15.4% this year and far from the 26% posted in 2013.

Competitiveness, essential for sustained growth. The gains in competitiveness achieved in recent years have considerably boosted economic growth, encouraging the export boom and resulting current account surpluses. Contained production costs are helping to maintain the competitiveness gained in recent years. Hourly labour costs fell by 0.3% in Q3 compared to Q2 (–0.1% year-on-year) while core inflation remained subdued (0.8% in November), below the euro area figure (1.1%). Headline inflation eased by 0.5 pp in December to 1.2% as oil prices decelerated. In 2018 inflation is expected to moderate to 1.6%, 0.4 pp below 2017’s increase (2% on average). This slowdown, which has been observed since March 2017, is expected to last throughout Q1 as a result of energy base effects. Core inflation, unaffected by energy fluctuations, is expected to rise gradually as the economy uses more of its production resources.

Adjustment continues in the external imbalance. Booming exports have led to substantial improvements in the current account balance. This has now been in surplus for five years and is key to correcting the country’s high debt position with respect to the rest of the world, one of its weak points. Spain’s net international investment position fell to –83.2% of GDP in Q3 2017 (–86.5% of GDP in Q2), although still well above the benchmark of –35% established in the European Commission’s Macroeconomic Imbalance Procedure. Good foreign trade figures have undoubtedly contributed to this improvement. In 2017 up to October, exports increased by a remarkable 8.7% year-on-year (12-month cumulative). Imports also increased sharply (10.3% year-on-year), largely as a result of higher oil prices. The increase in oil prices, which will continue in 2018, will result in a slight deterioration in the current account, which is expected to post a surplus of around 1.7% of GDP.

Good economic performance and low interest rates are driving the reduction of the government deficit. The total government deficit in September reached 1.5% of GDP in Q3, making it likely that the 3.1% deficit target agreed with the European Commission for 2017 will be met. Looking ahead, the favourable economic cycle coupled with lower interest pressure will continue to support the correction of the deficit, with Spain exiting the excessive deficit procedure in 2018. In the absence of more budget details, the deficit is expected to reach 2.5% of GDP in 2018, a decrease of 0.6 pp of GDP on year-end 2016. This reduction would bring the deficit close to the 2018 target of 2.2%. However, given that government debt is still at a high 98.7% of GDP, the correction of the deficit should not be left to cyclical improvements alone. Measures are required to ensure long-term structural improvements in the public accounts.

The real estate sector is on track to consolidate its expansion in 2018. House price trends are a good example of this. Q3 growth in house prices based on sales accelerated to 6.6% year-on-year (5.6% in Q2), more than the Q3 index based on appraised values (2.7% year-on-year). Given their very nature, appraised values fell less during the crisis and are therefore expected to rise more gradually during the expansionary phase of the cycle. Nevertheless, there is every indication that the upward trend in house prices will continue in the coming quarters. For instance, land prices rose by 7.4% in Q3, a typical early indicator of the house price trend in a year’s time. Demand and supply indicators also point to a dynamic trend, reflecting the sector’s strong recovery. In particular, new building permits grew by 25% in September (12-month cumulative). Nonetheless, the number of permits is still historically low and a lack of supply is already beginning to be felt in some areas.

Good outlook for bank credit, supported by the recovery in economic activity, continued accommodative monetary conditions and the boom in real estate. The breakdown of credit in Q3 2017 shows that consumer credit grew at a good rate (14.4% year-on-year) while loans to other segments still declined, albeit at a slower pace. The NPL ratio continued to fall in all segments. There has been a particularly positive 0.5 pp fall in the NPL ratio for developer loans over the past year, although this was still high at 20.8% in Q3 2017. The NPL ratio will continue to fall in 2018, supported by improvements in economic activity and the labour market, as well as sales of non-performing asset portfolios. 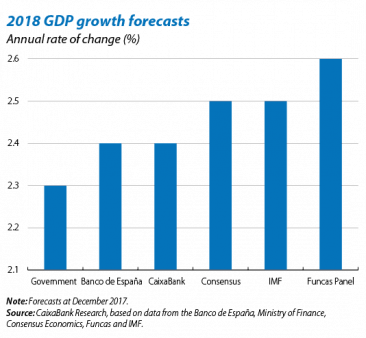 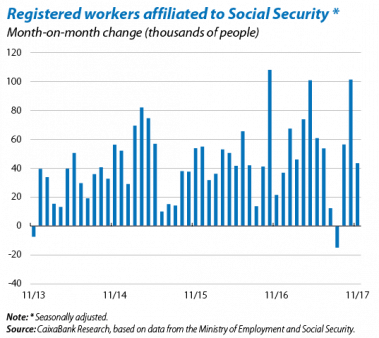 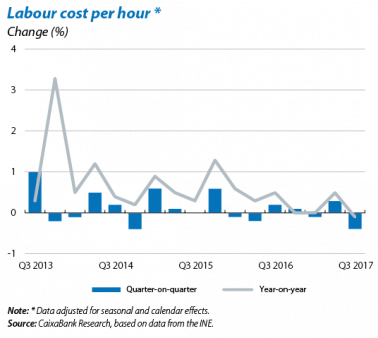 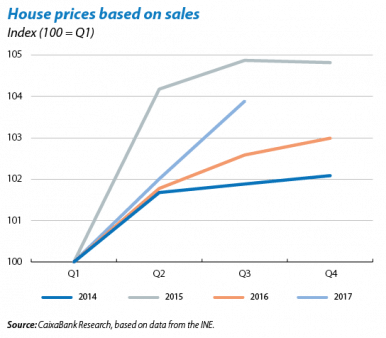 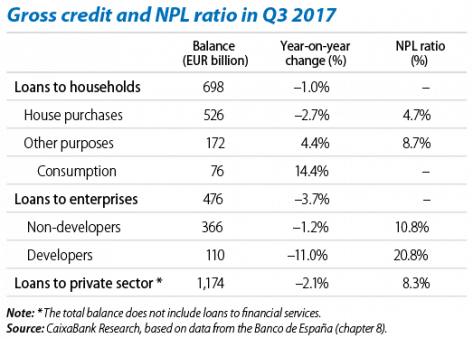