2019: a better than expected start to the year, but downside risks persist

The expansion of the global economy continues, but the growth outlook moderates. As a result of the maturity of the cycle, geopolitical uncertainty, trade tensions and temporary burdens on key economies, global economic activity has been progressing at a more contained rate in recent quarters. This is reflected in indicators such as the composite Purchasing Managers’ Index (PMI) which, despite increasing slightly in March (52.8 points) thanks to the improvement in services, remains hampered by the weakness of the industrial sector (the manufacturing PMI remained at 50.6 points, barely above the 50-point threshold). This environment of more moderate growth is also reflected in the new macroeconomic forecasts that the IMF presented in April. The institution revised downwards its global growth forecasts (down to 3.3% for 2019 from the 3.5% forecasted in January), especially for the advanced economies, and maintained the balance of risks skewed to the downside. Despite this review, and as noted by the IMF itself, the rate of economic activity could show a better tone as the year progresses. This is because of the pause in the tightening of monetary policy by the major central banks, the maintenance of an expansive fiscal policy in countries such as China, the thaw in the trade dispute between the US and China, and the fading of the temporary burdens.

From the thaw in trade tensions to uncertainty over Brexit. In the sphere of trade, the US and China appear increasingly close to reaching an agreement which would favour a reduction in uncertainty at the global level. On this note, the US trade representative Robert Lighthizer and the Treasury secretary Steven Mnuchin travelled to China in late April with the goal of bringing the trade negotiations between the two countries to an end. The US has already announced that part of the negotiations cover aspects such as intellectual property, the forced transfer of technology and non-tariff barriers. But while the US and China are steering their trade tensions, the uncertainty surrounding Brexit persists. In particular, the EU granted the United Kingdom a new extension of article 50, this time until 31 October, in order to allow more time to reconsider the exit strategy. The United Kingdom will have until then to ratify the withdrawal agreement, although a wide range of possibilities remain open (ranging from repealing article 50 entirely and cancelling Brexit, to a no-deal departure). However, the extension reduces fears of a disorderly Brexit (an option that has also been rejected by a large majority of the British Parliament).

E conomic activity in the euro area proved higher than expected in Q1 2019. In particular, GDP grew by 0.4% quarter-on-quarter, 2 decimal points above the figure for Q4 2018 and higher than our forecast and analysts’ consensus. The figure proved to be a positive surprise, since the modest figures recorded by some sentiment indicators and the problems experienced in the industrial sector in the first part of the year indicated that the moderation seen in the second half of 2018 would continue into Q1. In fact, the euro area economy had gone from growth rates of 0.4% quarter-on-quarter in early 2018 to levels of around 0.2% by the end of 2018. Part of this slowdown reflects the impact of a temporary factor: the disruptions in the automotive sector following the new European emissions regulations. However, two factors of a longer-lasting nature have also held back economic activity: the slowdown in global trade and political sources of uncertainty (the resolution of Brexit, the conflict surrounding Italy’s fiscal policy and the trade tensions between the US and China). As such, as some of these factors fade over the coming months, the euro area will show better performance in the second half of the year. By country for those we have data for, Spain showed particular promise, with growth of 0.7% quarter-on-quarter (see the section on Spanish Economy in this same Monthly Report), as did France (0.3%). Italy’s GDP rose by 0.2% in quarter-on-quarter terms, a modest figure but nevertheless an improvement after two consecutive quarters with negative quarter-on-quarter growth. In this context, the containment of inflationary pressures in the euro area (1.4% year-on-year in March, 1 decimal point below the figure for the previous month, largely due to the slowdown in core inflation down to 1.0%) still suggests a very gradual recovery in inflation towards the ECB’s target rate (~2%) and reinforces the view that the institution will maintain an accommodative policy over the coming quarters.

The more moderate dynamics in the growth of the euro area continue at the start of Q2. The PMIs for the euro area showed no sign of rising in April, indicating that growth in the region remains contained. In particular, the compound PMI for the euro area remained at modest levels (51.3 points in April, after the 51.6 points registered in March) and fell below analysts’ expectations. In the breakdown by sector, the manufacturing PMI remained within contractionary territory (at 47.8 points), while that of services (at 52.5 points) fell by 0.8 points. Similarly, the consumer confidence index deteriorated slightly in April, reaching –7.7 points. This figure is worse than expected and breaks the trend of improvement seen between December and March. Thus, on the whole, the latest data suggest that the euro area economy has not yet overcome its temporary burdens at the beginning of Q2.

GDP data provide a positive surprise in the US. Economic activity grew by a solid 0.8% quarter-on-quarter (3.2% annualised) in Q1 2019, and by 3.2% year-on-year. This represents an improvement with respect to the previous quarter (when it stood at 0.5% quarter-on-quarter) and provided a positive surprise, since economic activity was expected to be held back by three factors: (i) the partial federal government shutdown in January, (ii) the extreme cold that struck the north of the country, and (iii) the fact that the US statistics office tends to underestimate GDP growth in the first quarter. By components of demand, the acceleration in Q1 2019 was supported by external demand (with the improvement in exports and the drop in imports), inventory investment and public consumption. These are all elements that should subside over the coming quarters. In contrast, private consumption and business investment, which are mainstays of domestic demand, saw a slowdown in their growth rates, which is indicative of the future slowdown in US economic activity. Thus, despite the encouraging figure, we still expect a slowdown in the US economy, albeit somewhat more gradually than anticipated before the publication of the data: from 2.9% in 2018 down to 2.4% in 2019.

Contained inflationary pressures support the patience of the Fed. Although headline inflation picked up in March, core inflation, which has a closer correlation with economic activity, remained stable. In particular, headline inflation stood at 1.9% (4 decimal points above the figure for the previous month), largely due to the rise in fuel prices. On the other hand, core inflation, which excludes energy and food, stood at 2.0% (2.1% in February). This context of restrained inflationary pressures supports the Fed’s current strategy of remaining patient in relation to its monetary policy.

China experiences a pause in its slowdown and registers GDP growth of 6.4% year-on-year in Q1 2019. The figure, which coincided with that registered in Q4 2018 and was slightly higher than expected, reflected the improvement in industrial activity: by components of supply, manufacturing saw a significant acceleration in its year-on-year growth rate (from 5.8% in Q4 2018 to 6.1% in Q1 2019), in contrast with services (which saw a drop from 7.6% to 7.0%). The encouraging figure was also supported by the decline in trade tensions, following the progress made in the negotiations between China and the US, as well as by the positive impact of the monetary and fiscal stimulus measures undertaken by the Chinese government (described in the Economic Outlook section of the MR04/2019). These policies have allayed fears of a hard landing in the short term and the Chinese economy is expected to decelerate very gradually over the coming quarters. That said, its economic transition is complex and notable underlying imbalances persist (such as high corporate debt).

The Russian economy wrapped up a better than expected 2018 but faces a slowdown in 2019. In particular, Russia’s GDP grew by 2.2% in 2018, following higher than expected growth at the end of the year (2.7% year-on-year in Q4, compared to 2.2% in Q3). As for 2019, however, we anticipate a moderate slowdown in growth to levels below 2%. Political uncertainty (with the situation in Ukraine and the threat of new international sanctions), a scenario with only a moderate rise expected in the oil price, and the return to rates more in line with the country’s potential will support this trend. 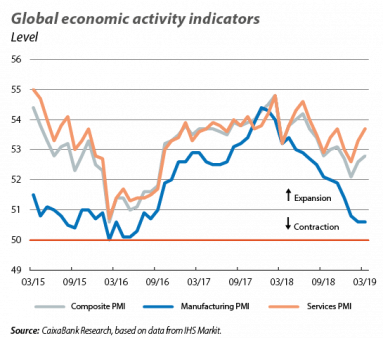 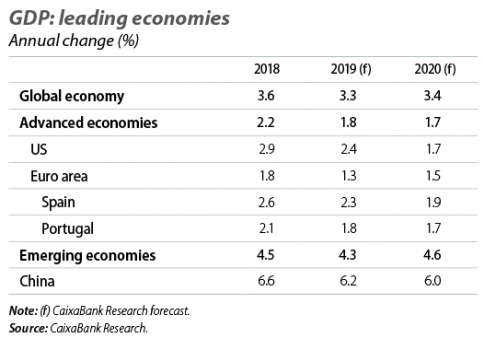 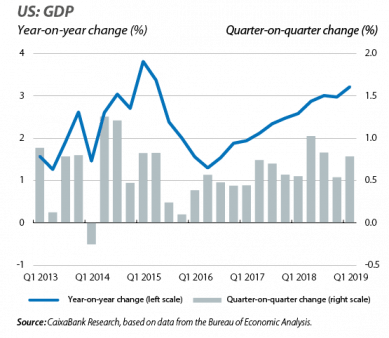 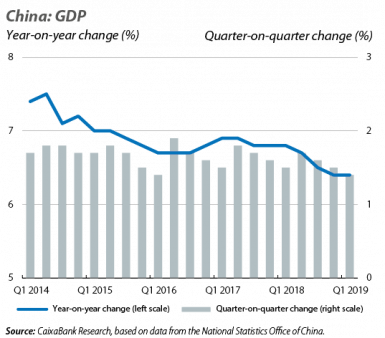 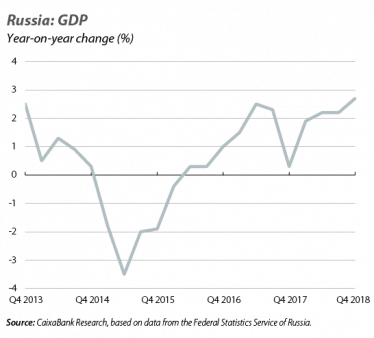