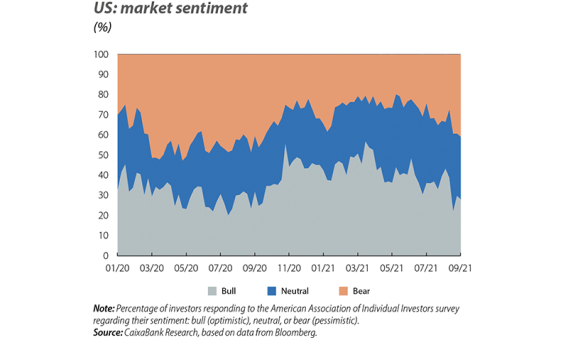 Investors focus on the withdrawal of the monetary stimulus, China and the gas market

The focus of the financial markets after the summer continues to be the economic recovery and the central banks’ strategy for withdrawing the monetary stimulus deployed following the outbreak of the pandemic. On the one hand, the ECB decided to slow the pace of asset purchases under the PEPP, while the Fed announced that, if the data continue to follow the expected trend, it would initiate the tapering process this year and hinted at a possible rate hike next year. These messages led to an increase in sovereign yields, albeit a much more moderate one than earlier this year, as both Washington and Frankfurt have insisted on describing the current inflation rally as transitory. The gas market, with an unprecedented price rally, as well as doubts over the health of the real estate sector in China (mainly the property firm Evergrande) have been the other key development of the month, given their implications both for the financial markets and for the wider global economy. The summer euphoria fades in the stock markets

In September, the major stock market indices registered widespread setbacks, both in advanced economies (falling from their recent historical highs) and in emerging economies (with more severe losses). The stock markets were weighed down, above all, by doubts surrounding the Chinese giant Evergrande. This conglomerate, with a strong presence in the real estate sector, has been in difficulties for months, which have recently been accentuated by the Chinese authorities’ agenda to clean up the country’s debt. In September, the firm’s failure to pay various of its financial obligations triggered concerns of a possible contagion into China’s financial sector and its wider economy. However, those fears were tempered at the end of the month thanks to the support from China’s central bank in the form of liquidity injections into the financial markets. Storage of this fossil fuel in Europe are at very low levels for the period of the year (around 70% compared to 90% last year). This low accumulation of stocks has been caused, among other factors, by the reduced supply of gas received from Russia, the production stoppages in the US, the rise in demand for gas in Asian countries such as China, and the dynamics related to liquefied natural gas, which allows the gas to be transported long distances through maritime trade. The latter element makes it possible for countries with high electricity consumption, such as those in Asia, to obtain gas supplies which are produced at supply points that are usually unloaded in Europe. Thus, the price of gas has increased in the main global benchmark (the Dutch TTF, which is the one used in Europe, is +90% and +384% up so far this month and year, respectively) and market-traded futures suggest that the price rally still has some way to go. However, after winter gas prices should return to more normal levels. The price of a barrel of Brent, meanwhile, also surged due to the rising gas prices, climbing above 78 dollars. 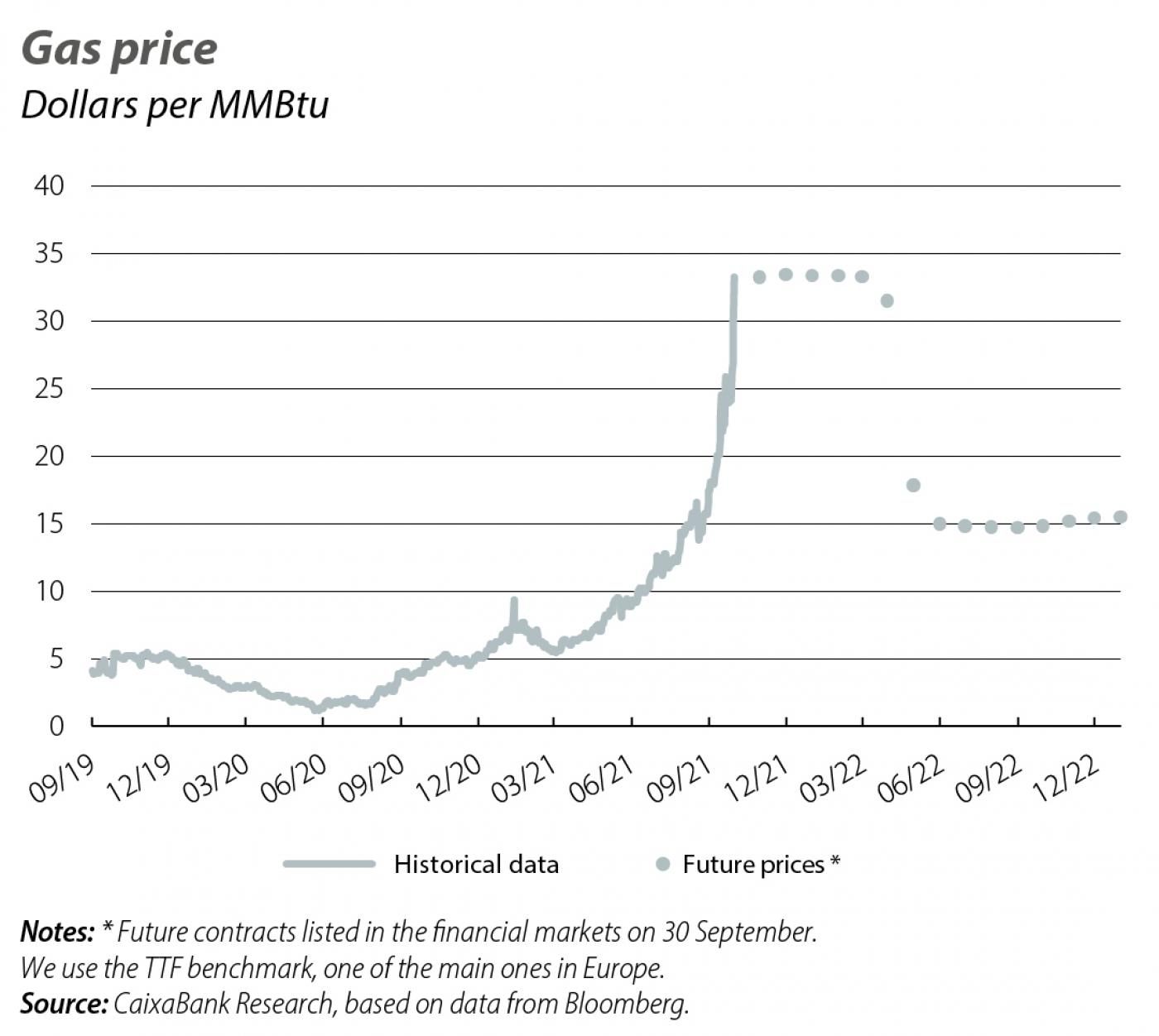 Following September’s meeting, the ECB announced that during Q4 it will reduce the pace of its asset purchases under the PEPP, which currently amount to some 80 billion euros per month. It justified this decision with the upward revision of the euro area’s GDP and inflation forecasts, as well as based on the assumption that it will be able to maintain the accommodative financial environment with a reduced presence in the financial markets. However, the monetary institution offered no clues as to how the PEPP will be brought to an end or whether, as expected by the consensus of analysts, the APP will gain more importance during 2022. On the rise in inflation, Christine Lagarde reiterated that the factors behind it are transitory in nature (base effects, bottlenecks, and increase in the energy component, mostly) and expects them to fade in the first half of 2022. Therefore, the ECB does not consider it advisable to overreact to factors that ought not to have a significant effect on the medium-term inflation target. 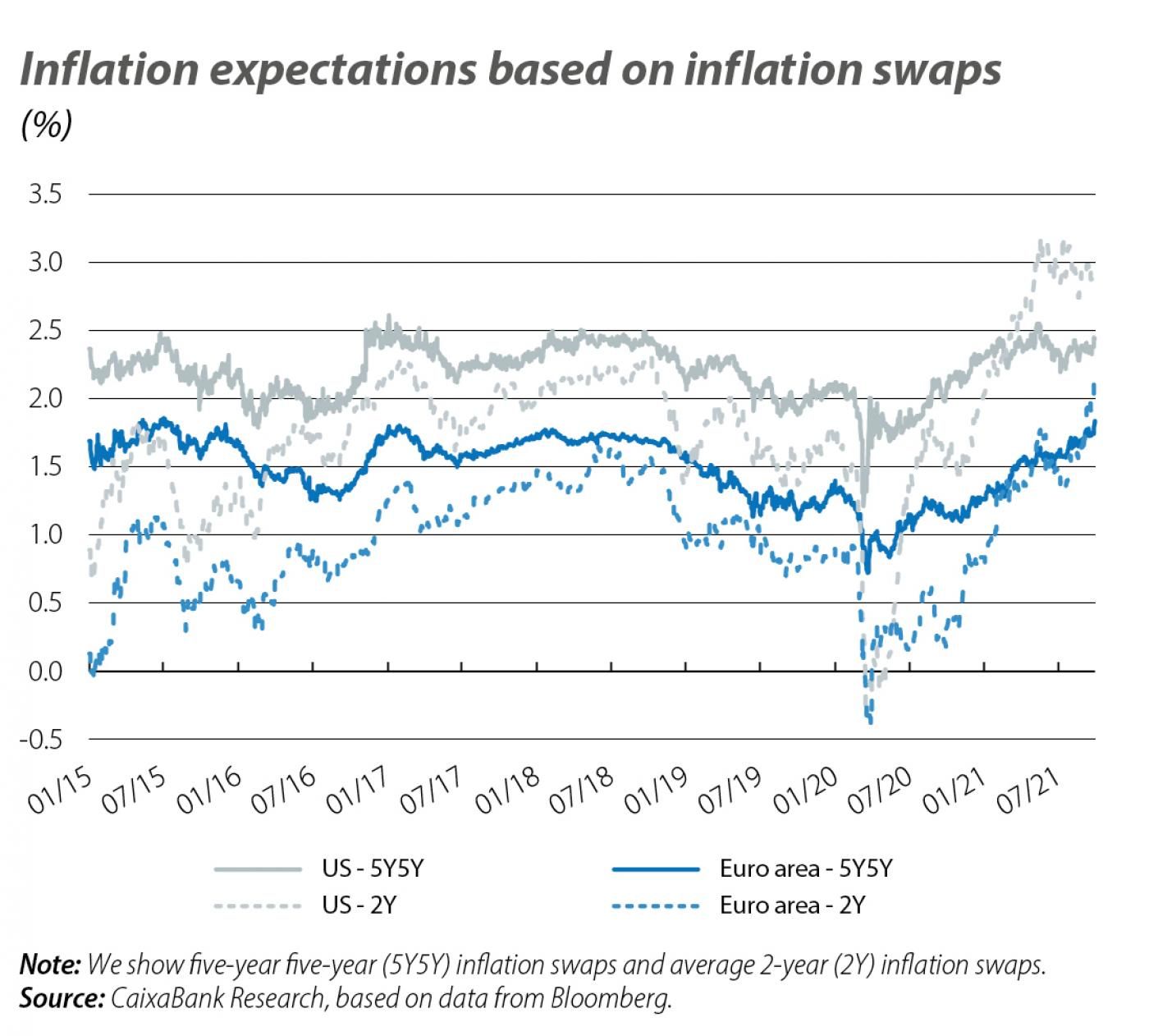 The Fed, meanwhile, kept the official interest rate range unchanged in September at 0.00%-0.25%, as well as maintaining asset purchases at a monthly rate of 80 and 40 billion dollars in Treasuries and MBSs, respectively. However, Fed Chairman Powell confirmed that an agreement was reached among FOMC members to begin the tapering process in the short term and to complete it by mid-2022 (provided that the economic data evolve in line with expectations). Also, in the update of the rate forecasts, the so-called dot plot showed that the FOMC is split over the possibility of bringing the first rate hike forward to 2022 and that the median voter considers that there should be three additional hikes in 2023 and 2024. In both the euro area and the US, sovereign debt yields registered a sharp rise following the announcements by the Fed and the ECB and the economic data that give continuity to the economic recovery. Thus, the German bund and the 10-year US Treasury both increased by 18 bps. This is a small rebound compared to those experienced in Q1 of this year, when fears of runaway inflation in the major advanced economies led the yield on the 10-year Treasury to reach over 1.70%. The risk premia of the periphery, meanwhile, registered widespread declines, while the dollar strengthened against most currencies of both advanced and emerging economies, leading the euro to fluctuate below 1.16 dollars (a year-to-date low). 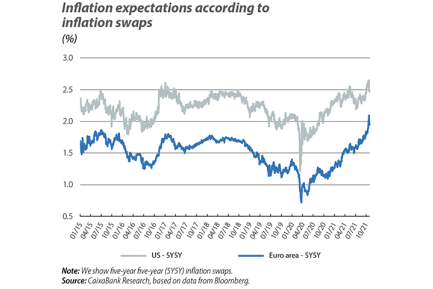