The intensification of the energy crisis was the dominant factor in the financial markets over the summer months. The interruptions in the supply of gas to Europe from Russia (a reduction in the flow via Nord Stream 1 from 40% to 20% of capacity in July and a temporary closure in late August), coupled with the high temperatures and summer droughts, led to a surge in natural gas prices in Europe. In particular, the TTF benchmark reached €340/MWh, an all-time high and more than double the price of late June. At the end of August, the futures markets were anticipating that the price would remain above €200/MWh at least until mid-2023. If confirmed, this would extend the inflationary pressures and could lead to a tightening of the monetary policy normalisation strategy. In this regard, the latest pronouncements from members of both the Fed and the ECB have shown a clear willingness to continue to raise official rates in order to curb the high inflation. In this context, in September we are now in the process of revising our main macro-financial forecasts. Among other elements, the new scenario will reflect a somewhat more rapid pattern of rate hikes by the major central banks. 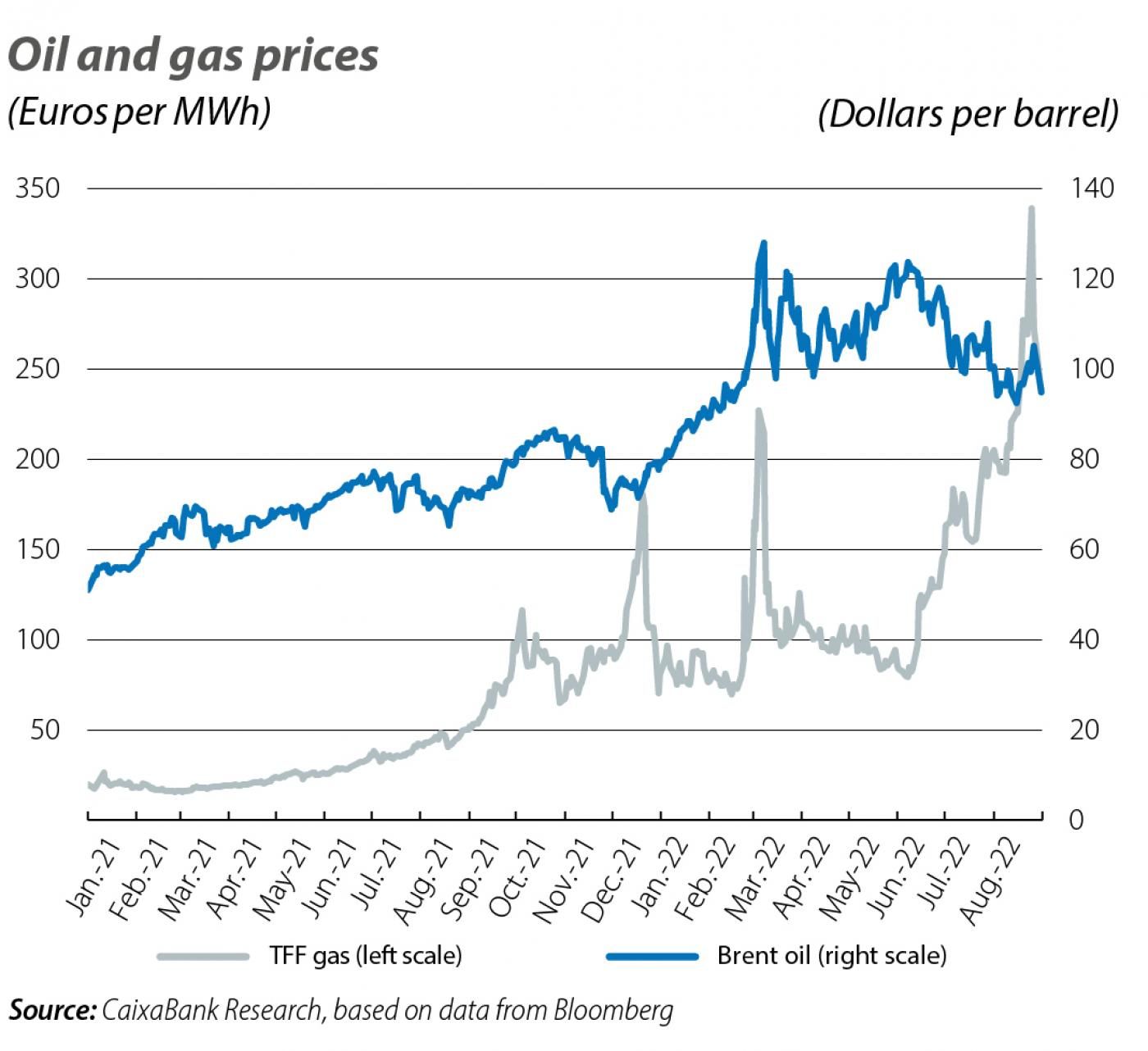 ... and upsets the tense calm in the financial markets

The upheaval in the gas market and the hawkish tone of the central banks triggered a negative confidence shock throughout the financial markets, interrupting the good performance of risky assets throughout July. Thus, the upward adjustment in inflation expectations and, consequently, in implicit rates in the money markets was reflected in a sharp rise in sovereign rates (of 72 bps up to 1.5% for the German bund; 54 bps up to 3.2% for the equivalent US 10-year bond at the end of August) and a flattening of sovereign yield curves. The international stock markets, meanwhile, ended August down for the month (5.1% for the Euro Stoxx and 4.2% for the S&P 500), partially reversing July’s gains (7.3% and 9.1%, respectively). Oil prices, on the other hand, fluctuated throughout July and August around the 100-dollars-per-barrel mark in the case of Brent oil, with fears of a recession applying downward pressure on prices while the potential OPEC production cuts attenuated the declines. At its meeting on 21 July, the ECB surprised analysts by announcing a 50-bp official rate hike, double what it had communicated at its previous meeting, thereby abandoning negative interest rates. This higher than expected increase was justified by the persistence of inflationary pressures, a risk that has been exacerbated in recent weeks by the situation in the gas market. In this regard, the latest messages from Governing Council members suggest there is widespread support for further rate hikes, although there is some divergence with regard to the pace of the increases, with the most hawkish members being in favour of increasing the adjustment to 75 bps as early as the September meeting. At the end of August, prices in the money markets were reflecting expectations that the ECB would raise official rates by 150 bps between September and December and by 75 bps during the course of 2023. The ECB, meanwhile, also approved the Transmission Protection Instrument (TPI) in July. This new anti-fragmentation tool will allow it to acquire – subject to certain criteria – sovereign debt from countries whose risk premia increase in an «unwarranted or disorderly» manner. The announcement of the TPI and the support through reinvestments (17 billion in favour of peripheral debt in June-July) have helped to keep the risk premia of peripheral debt relatively contained, even in Italy in spite of the early elections at the end of September (see the Focus «The ECB and risk premia in the periphery» in this report). 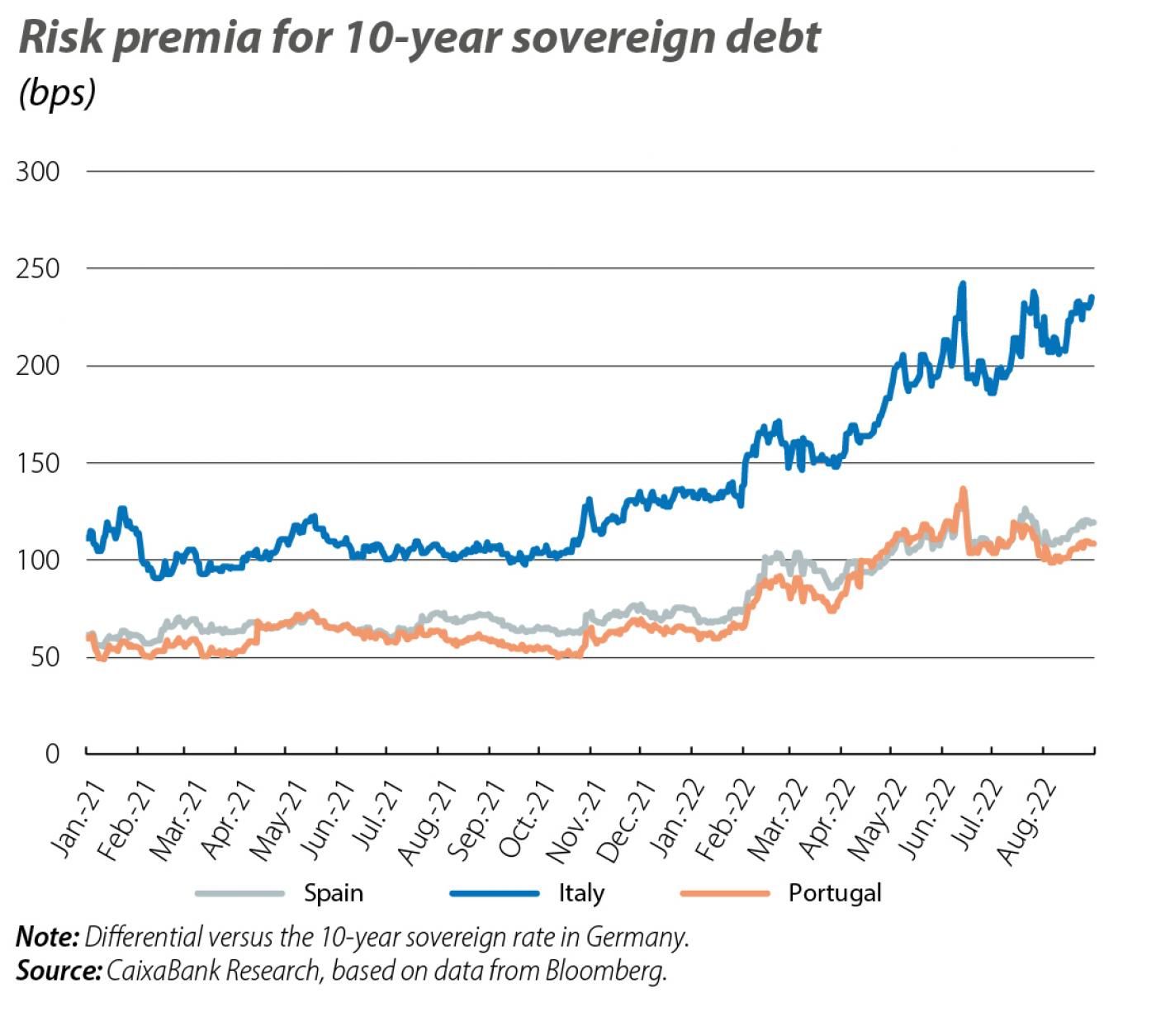 The Fed, meanwhile, maintains its pattern of rate hikes

For the second consecutive meeting, in July the Federal Reserve agreed to raise official interest rates by 75 bps, bringing them up to the 2.25-2.50% range. This is around the neutral territory that neither stimulates nor contracts the economy, according to the central bank’s own estimates. At the Jackson Hole conference, President Jerome Powell reiterated the central bank’s intention to continue to raise rates above the neutral level and to keep them high until there is clear evidence that inflation is moderating in line with the target. In contrast, the money markets are betting that the Fed will likely change course in the second half of 2023, when the first drop in official rates is anticipated. However, these expectations have registered a downward correction in recent weeks, in a context of high volatility. The high uncertainty and the rapid normalisation of the Fed’s monetary policy have provided greater support for the US dollar, which appreciated (in effective nominal terms) 2% between late June and late August and is trading at around parity with the euro. 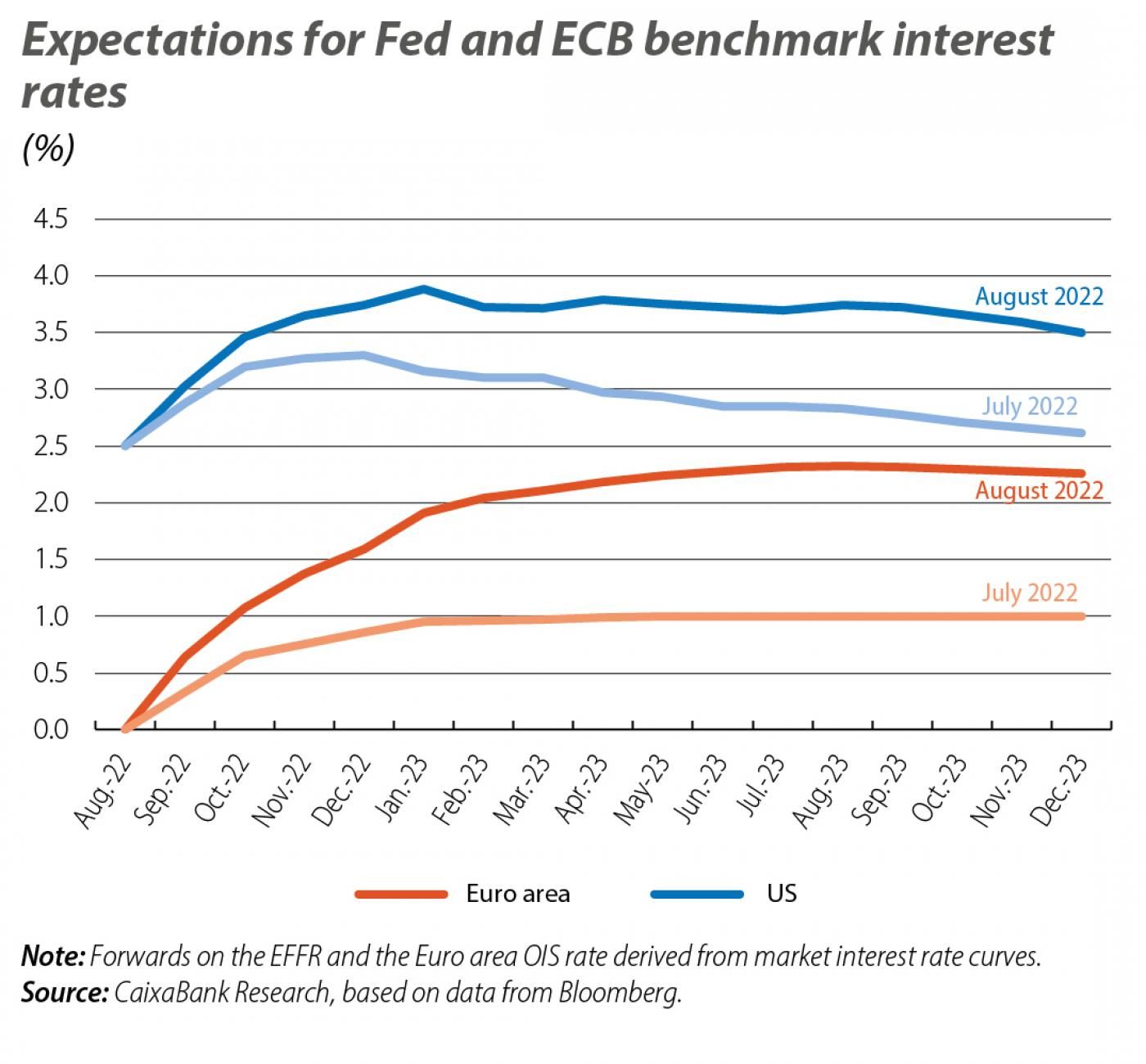 The heightened uncertainty, the tightening of financial conditions in the West and the escalating inflationary pressures around the world continued to undermine investors’ interest in emerging countries. Thus, according to the International Institute of Finance, net portfolio flows to these economies declined again in July (–9,799 million dollars), the fifth consecutive month of net capital outflows. In response, central banks in some countries approved further official rate hikes. The exceptions were the central bank of Turkey and the People’s Bank of China. The former unexpectedly announced a 100-bp cut in the reference rate in August, bringing it to 13%, while the latter agreed a 15-bp cut in the rate applicable to five-year loans, which serves as the benchmark for mortgages. The Chinese government also announced an economic stimulus plan, with the bulk of the measures aimed at supporting the housing market. 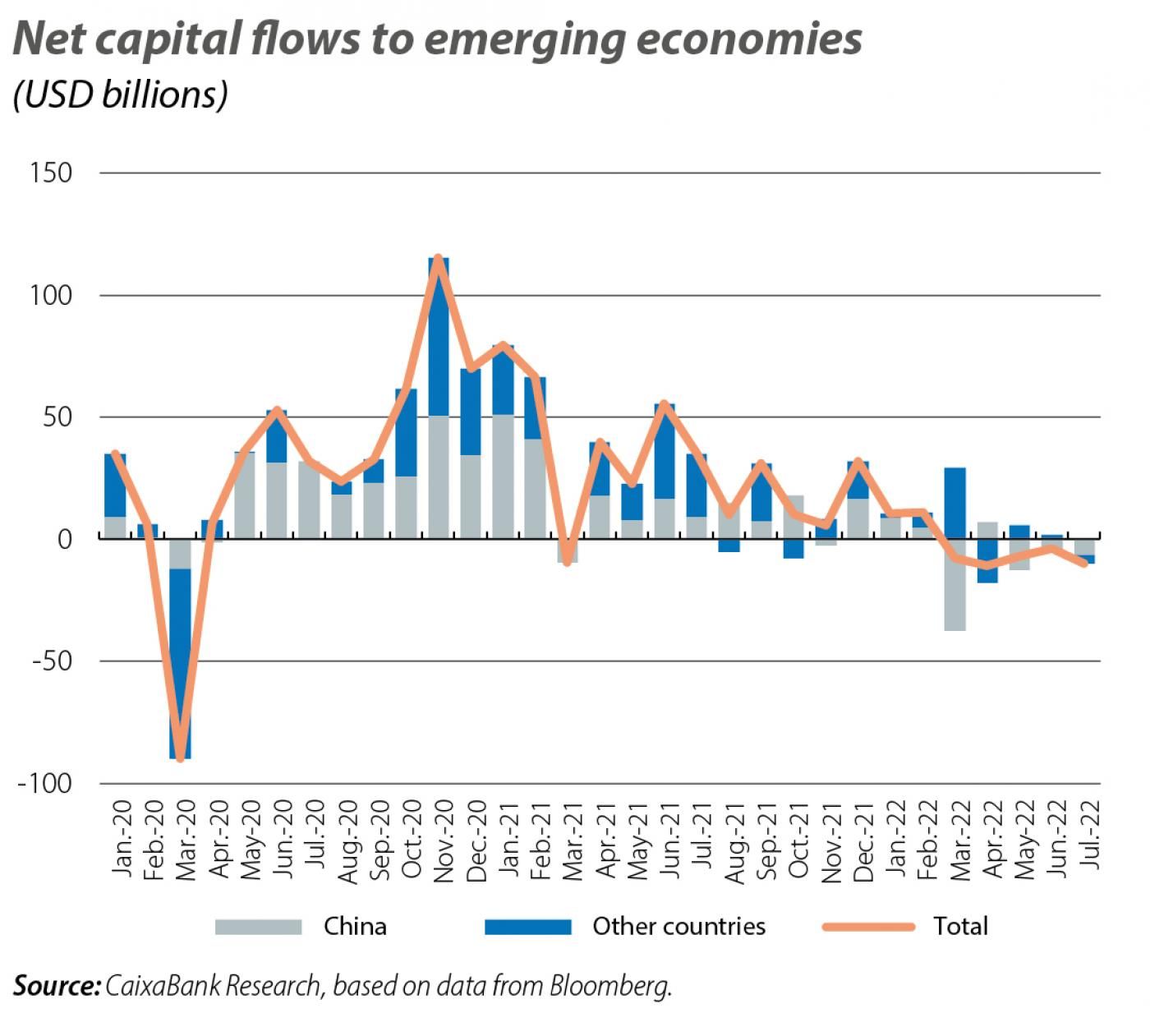 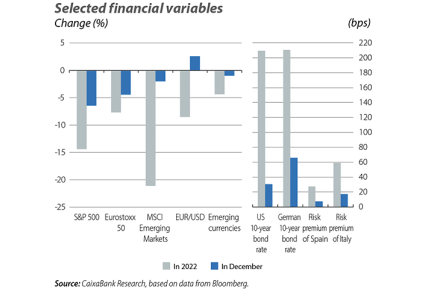