A gentle moderation in growth

The economic activity indicators show that the industrial sector is going through a difficult time. For 2018 overall, Spain’s GDP registered a strong growth of 2.5%, notably higher than the euro area average (which was 1.8%). For 2019, the growth of the Spanish economy is expected to remain more dynamic than that of the major euro area economies, although it will moderate slightly down to 2.1%. This moderation in growth is attributable both to the lesser cyclical boost and to the reduced buoyancy in the foreign sector, in a global environment marked by heightened uncertainty. In this context, the latest economic activity indicators gave mixed signals. On the one hand, the activity indicators for the services sector presented a positive tone, as reflected in the services PMI index in January, which rose 0.7 points up to 54.7 points. In contrast, the equivalent indicators for the industrial sector showed that this sector is going through a difficult time. An example of this is industrial production, which in December fell by 6.2%, the largest drop since December 2012. Another example is the industrial turnover indices, which also declined in December, by 2.5 pps, and remained stagnant (three-month moving average). This unfavourable performance of the sector is partly due to the energy sector, which is particularly volatile, and to a lesser extent the automotive industry, a sector that is feeling the effects of regulatory changes at the European level and the decline in international demand.

The labour market began 2019 with a moderate tone. The number of people registered with Social Security increased by 38,179 in January (seasonally-adjusted data), a lower increase than that of January 2018 (58,758). As such, the pace of job creation moderated down to 2.9% year-on-year, following the slight acceleration registered in the month of December (3.1%). By sector, job creation in services grew by 2.9% in January (3.1% in December), construction maintained its good tone with a 6.3% year-on-year growth and industry grew by 1.6% year-on-year, continuing the gradual slowdown experienced throughout 2018. All in all, cumulative job creation amounts to 537,269 people in the past 12 months, an encouraging figure that is added to the positive results from the LFS and the encouraging national accounting data for Q4 2018. Over the coming months, we expect this improvement to be maintained, albeit it at more moderate rates.

The foreign sector ends its sixth consecutive year in surplus, although that surplus continues to shrink. In December 2018, the current account balance registered a surplus of 0.8% of GDP (12-month cumulative balance), albeit clearly below the 1.8% registered in December 2017. Of this 1.0-pp moderation in GDP, 3 decimal points can be attributed to the increase in the price of oil, 4 decimal points correspond to the deterioration in the balance of non-energy goods and the rest is the result of the decline in the balance of services. The latter decline was most notable in non-tourist services, although the tourism surplus also fell slightly due to the increase in imports (Spaniards travelling abroad). Looking ahead to the rest of 2019, CaixaBank Research expects the deterioration in the foreign sector to be much less pronounced (0.2 pps of GDP) and expects it to remain in surplus, supported by the continuation of gains in competitiveness and the moderation in the oil price.

The extension of the public budgets for 2019 is confirmed. At the end of 2018, central government debt amounted to 1.17 billion euros. This figure is equivalent to 97.0% of GDP and represents a 1.1-pp reduction compared to the figure registered at the end of 2017. Despite this decrease, the level of public debt remains high, not far below the peak of 2014 (100.4% of GDP). In this regard, the Congress of Deputies’ failure to approve the General State Budgets submitted by the Government for 2019 has led to the 2018 budgets being extended to this year. This, coupled with the fact that some of the main measures of government expenditure (pensions indexed to the CPI and the salary raise for public sector employees) have already been approved, whereas the revenue measures have not been passed, suggests that the public deficit is likely to end up being somewhat higher in 2019 than previously expected (CaixaBank Research’s new forecast places it at 2.3%).

The real estate sector maintained its positive tone in 2018. The price of housing published by the Ministry of Public Works, based on valuation appraisals, accelerated in Q4 2018 and registered a 3.9% year-on-year increase (3.2% in Q3 2018). This brings the total growth in prices for the year as a whole to 3.4% (2.4% in 2017). This trend has occurred in a context in which the demand for housing remains very strong. For 2018 as a whole, 515,051 units were sold, 10.1% more than in 2017. Of particular note were sales of new homes, which grew by 11.1% in 2018 and exceeded the annual growth of sales of existing homes (9.9%) for the first time since 2007. For 2019, the outlook for the sector remains positive. Home sales and prices are expected to continue to register considerable growth, albeit somewhat more moderate than the last year expansion, in line with the performance of the economy as a whole. 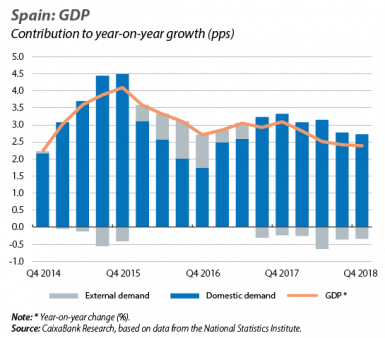 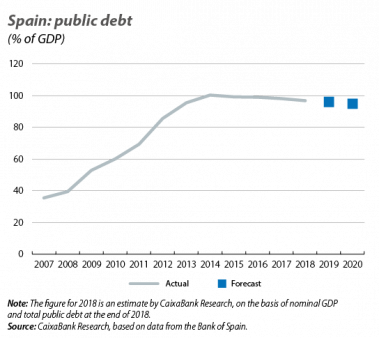