The global expansion continues, but the risks are amplified

Slight deterioration of the global macroeconomic scenario. On the one hand, the Q1 growth data for some of the major emerging economies (India, Brazil and Turkey) proved somewhat worse than expected, leading us to slightly reduce our growth forecast for 2019 (from 3.3% to 3.2%) and confirming that the global economy will shift down a gear this year (considering that in 2018 growth stood at 3.6%). On the other hand, we have seen a significant deterioration in the global sentiment indicators in Q2: the global PMI composite indicator fell to 51.2 points in May (52.1 in April), while the manufacturing index stood below 50 points (the threshold that separates the expansive and recessive territories). Thus, the data indicate that global economic activity has embarked on a somewhat weaker path, affected by greater global uncertainty.

Heightened uncertainties. One of the main reasons we assign a greater likelihood of the downside risks materialising is the fact that the protectionist tensions between the US and China reappeared in May and, as suggested by all the indicators, this time are here to stay. As such, the global economy remains on high alert, as demonstrated by the spike in the geopolitical risk indices. This is despite the tempering of the situation in the short term, as trade negotiations resumed following the meeting between Trump and Xi Jinping at the G-20 summit in Osaka in late June. Therefore, although some form of agreement between the two powers can be expected, it is unlikely to be an ambitious one. In addition, there are two reasons that reinforce the view that uncertainty has come to stay. Firstly, there is a significant risk that, in the end, no such agreement will be reached: underlying disagreements remain unresolved and China has published a white paper in which it rejects having taken advantage of forced technology transfers, one of the key points of the litigation. The second reason is that, even if an agreement is reached, uncertainty will not fade overnight: the tariffs imposed are unlikely to be withdrawn immediately and, in a conflict as complex and with so many edges as this one, some latent pockets of uncertainty will persist. If these risks materialise, the slowdown could prove much more abrupt than we expect, largely due to the indirect effects of heightened uncertainty. In particular, both China and the US would pay a heavy toll in terms of growth (for exact figures, see the Focus «The threat of protectionism in the global economy» in this same Monthly Report).

In Europe, political uncertainty rises once again. On the one hand, if the Italian government fails to present a credible fiscal plan in July, the European Commission is likely to recommend to the European Council to impose an excessive deficit procedure (EDP) on the country. This would oblige the Italian cabinet to include adequate adjustment measures in its budget for 2020, which is to be presented by mid-October 2019, in order to streamline the national accounts but without harming economic growth, which is already scarce. The negotiations between Rome and Brussels will be drawn out (the EDP is essentially a gradual, political process which offers a lot of leeway for affected countries to take corrective measures), but the tensions are likely to gain prominence over the coming months. Furthermore, the Italian government still has the option to call new elections at the end of the year, which could lengthen the whole process and intensify the conflict. In the United Kingdom, the situation is not looking much brighter: Boris Johnson is emerging as the favourite to become the new Prime Minister and, although the difficulties that the British Parliament is experiencing to agree on an exit strategy should pave the way for another extension to Article 50 at the end of October, his statements reiterating the commitment to leave the EU in October highlight the risk of a no-deal Brexit.

The economic indicators are holding up relatively well. In particular, the economic activity indicators for Q2 overall remain reasonably positive and their slight decline is consistent with the gentle slowdown we expect for this year. The business sentiment indicators (ISM) reflected this trend, as they remained comfortably within expansive territory in May (i.e. above 50 points), although the manufacturing index fell by 0.7 points. On the other hand, the strength of the labour market showed signs of softening, with the creation of 75,000 jobs in May (223,000 on average in 2018). Nevertheless, this is still a reasonable figure given that the US economy is in a situation of full employment and in a more mature phase of the cycle. On this note, the unemployment rate remains at a very low 3.6%, while wages grew by a buoyant 3.1% year-on-year.

Inflationary pressures remain contained. In particular, inflation in the US stood at 2.0% in May, the same figure as in April, while core inflation stood at 1.8% (2.1% in April). Looking ahead to the coming months, we expect core inflation to remain at the current levels. As such, the absence of significant inflationary pressures could enable the Fed to implement a rate cut if the economic context were to deteriorate.

Economic activity moderates in Q2. Following a higher than expected GDP in Q1 (0.4% quarter-on-quarter), reflecting the resilience of domestic demand, recent indicators suggest that in the second quarter the euro area economy will have grown at a more moderate rate (0.2%-0.3% quarter-on-quarter) and that it will be more in line with the slowdown that we witnessed in the second half of last year. The decoupling between a service sector that remains buoyant, thanks to the endurance of domestic demand, and an industrial sector that is suffering the effects of global uncertainty and the slowdown in trade flows was once again reflected in the Purchasing Managers’ Index (PMI): in June, the services PMI rose, while the manufacturing index remained stranded in recessive territory (47.8 points). The ECB’s own forecasts, which in its June update point towards a growth projection for 2019 of 1.2% (a figure similar to our forecast of 1.3%), reflect the expectation of moderate growth. In part, this is the result of a more adverse global environment that is penalising foreign demand. Therefore, both a subsiding of the protectionist tensions and the dissipation of the factors that have adversely affected the automotive sector could give euro area growth some more traction. Inflation, meanwhile, remains at modest levels, standing at 1.2% in both May and June, after the seasonal effects that had temporarily boosted it in April due to Easter subsided.

Germany fails to pull out of the rut. The importance of the foreign sector for the German economy (in 2018, German exports of goods and services accounted for 47% of GDP, compared to just 34% in Spain, for example) explains why it is being particularly affected by the uncertainty and the slowdown in the global economy. The industrial sector, which is highly reliant on exports, is experiencing widespread adverse effects far beyond those experienced by the automotive sector, as reflected in the industrial production figures for April (–1.9% year-on-year). In addition, the Bundesbank stated in its June update that it expects GDP to contract slightly in Q2. All this has led us to revise Germany’s growth forecasts for 2019 and 2020 down by –0.2 pps, to 0.8% and 1.4%, respectively.

China: economic activity indicators continue to suggest a slowdown. In particular, in May industrial production and investment slowed down once again, while our growth indicator, which reflects the state of economic activity based on the performance of the sectors and variables that are most representative of the real economy, continued to paint a picture of gradual deceleration. All this indicates that the county’s economic authorities are following a reactive approach, which consists of stimulating the economy when they detect a worsening of the slowdown, followed by immediately lifting the foot off the accelerator when this stimulus produces an improvement in the economic data. In this sense, China has a relatively wide margin in monetary policy (less so in fiscal policy) to implement new expansionary measures in order to avoid an abrupt slowdown. On this note, the governor of the central bank, Yi Gang, has already announced that they are prepared to act if necessary.

Among the emerging economies, Turkey remains at a low point. After three quarters with significant declines, Turkey’s GDP enjoyed somewhat of a breather in Q1 2019 with quarter-on-quarter growth of 1.3%, although in year-on-year terms the country’s growth rate remained in negative territory (–2.6%). All in all, we maintain our forecast for 2019 at –2.5%, given that the Turkish economy remains in a difficult context, with significant imbalances that are still very present. 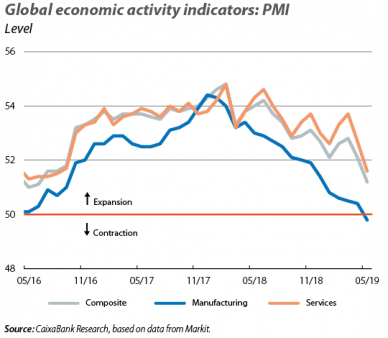 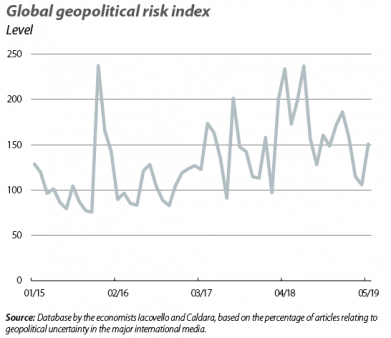 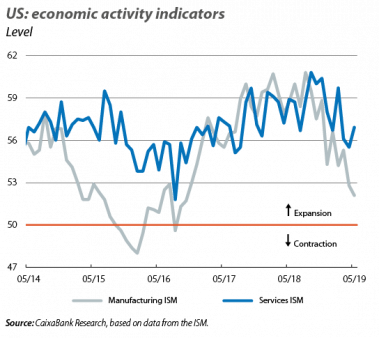 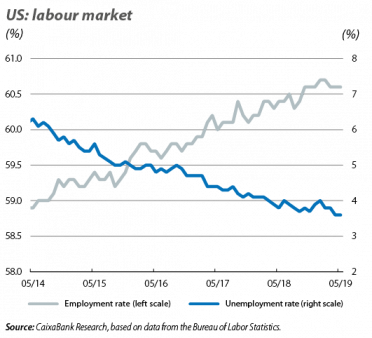 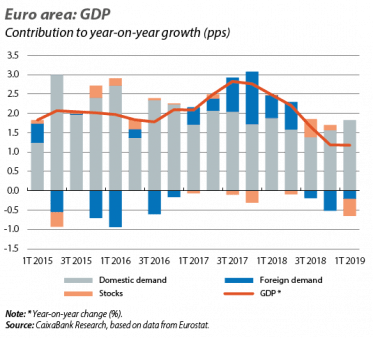 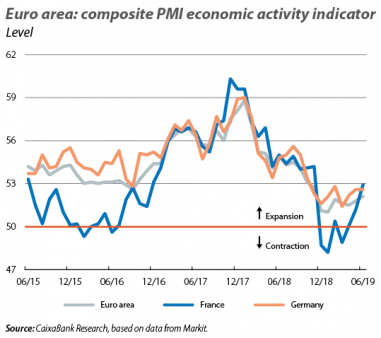 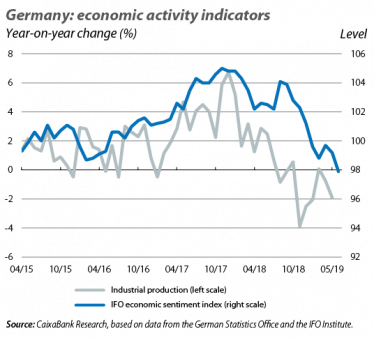 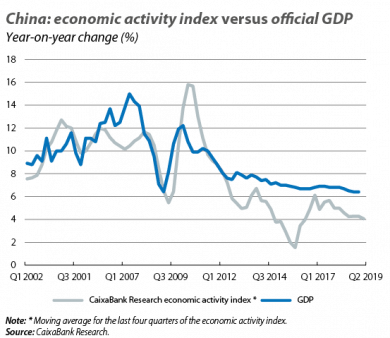 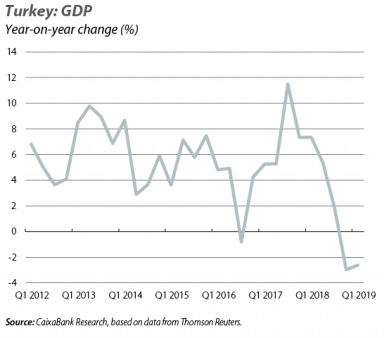