The euro area's recovery is still showing signs of weakness. This can be seen both in GDP being at a standstill in Q2 and also in the continued downward revision of growth prospects by leading international bodies. The revision carried out by the OECD in September was particularly significant, both in size and scope, affecting Germany, France and especially Italy. The activity and confidence data published over the last month have merely confirmed this scenario of a slow, fragile recovery. However, it is important to note that, although it is slower than expected, the scenario is still one of recovery. In this respect the foreign sector appears to be gaining the importance lost over the last few quarters. Fast action by the European Central Bank has also helped to curb the deterioration in growth prospects although, as Mario
Draghi noted, those countries showing the greatest signs of weakness, such as France and Italy, need to carry out far-reaching structural reforms to ensure the recovery is solid and balanced in the long term.

GDP stalled in Q2 with some sombre underlying trends. The breakdown of GDP by component shows that this deterioration was concentrated in stocks (–0.2% quarter-on-quarter) and gross fixed capital formation (–0.3% quarter-on-quarter), this last component halting the gradual improvement that had been seen in domestic demand. Although the investment component is normally highly erratic, neither the tone of Q3 indicators nor the confidence index for industry has provided any grounds for great optimism. The rest of the GDP components looked healthier for Q2, particularly the 0.3% rise in household consumption and the 0.5% rise in exports in quarter-on-quarter terms.

Demand indicators are losing steam. The deterioration in investment indicators has spread to those for consumption. For example, the consumer confidence indicator has fallen for the last four months and stood at –11.4 in September. This loss in confidence can also be seen in the slowdown in July's retail sales, which grew by 0.8% year-on-year, far from their 1.4% average growth rate in Q2.

The PMIs for the euro area confirm this weak scenario, falling in Q3 compared with the previous quarter. The composite PMI has gone from 53.4 points in Q2 to 52.9 in Q3. Both the PMI for services and for manufacturing have slowed down over the last two months although they are still in expansionary terrain; specifically, in September they stood at 52.8 points and 50.5 points, respectively. By country, of note is the French relapse, whose PMI is still contracting (49.1 points in September), making it even more vital for the country to carry out far-reaching structural reforms. The trend in industrial production also suggests that Europe's economy is continuing to grow but only moderately. In this case, growth in July stood at 1.7% year-on-year, 1 p.p. higher than the average figure for Q2 but, given the series' volatility, we
cannot conclude that this is the start of an upward trend.

The incipient improvement in the labour market has continued in Q2 with employment rising by 0.2% quarter-on-quarter (0.1% in Q1). The unemployment rate has also continued to improve for the euro area as a whole: in August it stood at 11.5%, 0.5 p.p. below the figure for August 2013. There are still substantial differences between countries however. In Germany unemployment is still at a minimum (4.9% in August) while the periphery countries have seen a significant drop (1.4 p.p. in Ireland, 1.7 p.p. in Spain and 2.1 p.p. in Portugal compared with August 2013). However, in France and Italy the labour market has yet to show signs of improvement. In fact, in August France's unemployment rate stood at 10.5%, 0.3 p.p. higher than the figure for August 2013.

The trend in prices also reflects a more lethargic scenario. Inflation in the euro area is still extremely low: in September
it stood at 0.3%, 0.1 p.p. below August's figure. Core inflation also moderated, going from 0.9% in August to 0.7% in September. But the particularly worrying aspect in this trend is that it is not due to just one or two components of the HICP, such as the price of oil or fresh foods. This low rate of inflation is the result of a widespread drop in the price of all HICP components (as can be seen in the corresponding graph). These underlying trends can also be seen in general in the main countries of the euro area. Nonetheless, we expect this trend will gradually change direction over the coming months thanks to the improvement in domestic demand and especially to the euro's depreciation (see the Focus «The relationship between the value of the euro and inflation» in this Report).

The trend in prices puts the ECB on the alert. Although Europe's top monetary authority had already announced a package of accommodative measures in June, the deterioration in the economic outlook over the summer has forced it to take further steps. In September it announced a new asset purchase programme of corporate bonds; specifically, as from October the ECB will buy asset and mortgage-backed securities. This new package of measures, together with the targeted long-term refinancing operations (TLTRO) announced in June, is expected to help consolidate the incipient recovery in credit. However, important details of this programme have yet to be clarified, such as to what extent it will help banks transfer risk. For the moment, the first TLTRO, held in September, was less widely used than expected by the markets (only 21% of the liquidity available was borrowed). Nevertheless, we expect participation to be greater in the second tender in December, once the results of the stress tests carried out by the ECB have been published.

The foreign sector is building up steam. Within this rather gloomy scenario, exports offer a slight ray of hope. The first half of the year was affected by a slowdown in growth in the main emerging countries and geopolitical tensions. In the last few months, however, the bulk of the evidence suggests that this sector has started to pick up. Specifically, in July exports of goods grew by 2.7% year-on-year (compared with 1.0% in the first half of the year). Of particular note is the upswing in exports to the US and China, namely 10.1% year-on-year in both cases, helping to cushion the 12.2% drop in sales to Russia. Moreover, the overall outlook is positive: growth prospects are favourable for the main emerging economies and geopolitical tensions are not expected to get any worse, although in this case it is more difficult to guess the path they might take (see the Focus «The impact of the Russian crisis on Germany and Central Europe», also in October's Report). Similarly, the euro's recent depreciation should boost growth in exports over the coming months.

Italy is one of the weak links hindering the euro area's recovery. The Italian economy is still coming out of a long and very deep economic recession with extremely high unemployment and an inflation rate that is still very low. The government led by Matteo Renzi has announced that it intends to implement a wide range of structural reforms in order to restore the Italian economy's growth capacity. On the table are proposals to reduce the dual nature of the labour market and increase its flexibility, to make the legal system more agile and reform electoral legislation to make the country more politically stable. The last IMF report on the Italian economy stressed that these measures need to be firmly implemented to create employment and improve the country's productivity. However, in spite of the new  government's good intentions, there are still strong doubts regarding its ability to carry these out and the speed at which it can do so, with the result that the region's prospects in the medium and long term are still pessimistic. 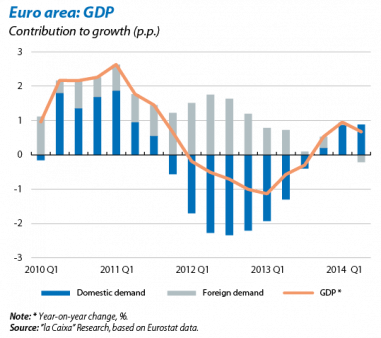 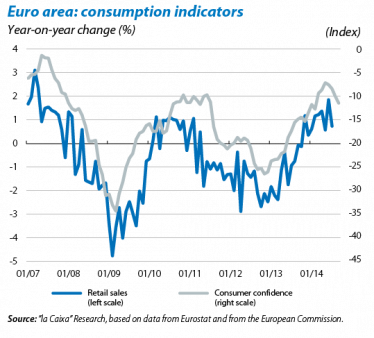 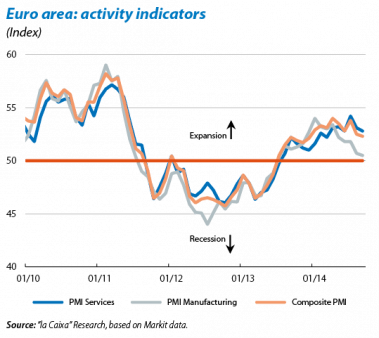 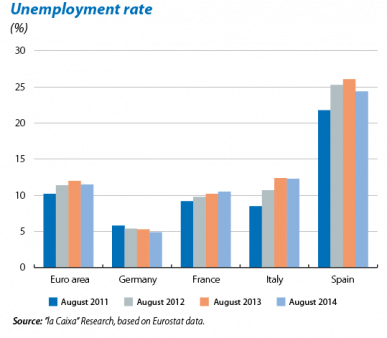 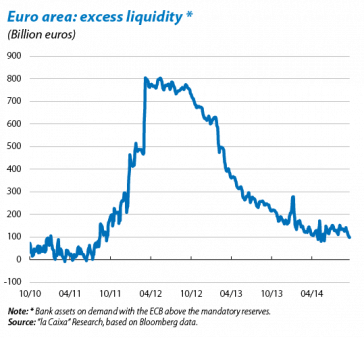