The lifting of lockdowns boosts sentiment in the financial markets

The financial markets capture the beginning of the recovery. In May, investor sentiment continued the incipient improvement that had begun in April and the appetite for risky assets increased. Some of the main catalysts that favoured investor optimism included the containment of the number of deaths caused by the pandemic, advances made in potential treatments for COVID-19 and the lifting of the restrictions on activity in the major international economies. In this regard, the economic reconstruction programme proposed by the European Commission to support the recovery of economic activity in the region also benefited investor sentiment (see the International Economy section for further details). Meanwhile, the major central banks continued to act as guarantors of financial market liquidity, in an economic environment which they anticipate will remain demanding over the coming quarters, and they pledged to take further measures if necessary.

The stock markets slowly recover. The main stock market indices performed well and extended the gains registered in April, albeit in an environment of greater volatility and with more contained advances. In the case of the developed economies, for most of the month the US indices registered greater gains than their European counterparts, continuing the trend seen since the beginning of the health crisis. However, with the recovery programme proposed by the European Commission, in the second half of May this situation turned a corner and the European indices performed in line with the S&P 500. In the emerging bloc, the performance was also disparate between economies. The decline registered in the MSCI Latin America index since the beginning of the year is three times greater than that of its Emerging Asia counterpart. The reasons for this uneven performance lie in the economic vulnerability that several Latin American countries (such as Brazil, Mexico and Argentina) were already experiencing prior to the current crisis, which would have been exacerbated by the pandemic as a result of lower commodity prices and the depreciation of their currencies. Another sign of this weakness came when part of Argentina’s sovereign debt defaulted on maturity, with the country requesting a 10-day margin to renegotiate terms.

The oil market stabilises. Following the turbulence in the crude oil market during April, when imbalances between supply and demand led to the price of a barrel of WTI oil (the US benchmark price) temporarily trading at negative prices, in May things returned to a certain normality. In addition to the incipient rise in the demand for fuels (resulting from the gradual reopening of activity in most countries) and the improvement in investor sentiment, the production cuts agreed by OPEC and its allies also came into force (amounting to 9.7 million barrels a day in May and June). Moreover, Saudi Arabia, Kuwait and the United Arab Emirates announced further production cuts in addition to those agreed with the other members of the cartel. Furthermore, in the US, several shale extraction wells halted their activity in order to ease the tensions arising from the oversupply that occurred in the previous month. The market response was strong and the price of a barrel of Brent oil rose to over 35 dollars.

The central banks commit to bolstering their measures. In May, the Fed and the ECB continued to increase their balance sheets as a result of the asset purchases under their respective monetary stimulus programmes aimed at combating the crisis. The effectiveness of their measures was made clear by the reduction of tensions in the money and credit markets, but both institutions also insisted that they are prepared to employ more tools if necessary. Another event that drew attention during the month was the ruling by the German Constitutional Court, which questioned aspects of the ECB’s monetary policy. Specifically, the Court considered that the programme of public debt purchases in the secondary market, which the ECB has been implementing since 2015 (the so-called PSPP), fails to respect the principle of proportionality (in particular, the Court considered that an analysis has not been performed of the programme’s costs and benefits in terms of the inflation mandate and the economic impacts of the measures). Thus, the Court determined that if this analysis fails to materialise within the next three months, the Bundesbank will have to cease participating in the programme. The ECB, meanwhile, indicated that it is subject to the jurisdiction of the European courts and that these courts had already ruled, in a previous judgement, in favour of the legality of the PSPP and its consistency with the ECB’s mandate. In the short term, the ruling is not expected to affect the ECB’s capacity to implement stimulus packages (moreover, the ruling does not refer to the PEPP, the major stimulus programme that the ECB has launched to address the COVID-19 crisis). Nevertheless, the conflict highlights the risk of tensions arising between the various jurisdictional levels within the EU.

The risk premiums of the euro area periphery narrow. The greater appetite for risky assets also extended to the public debt market, where the spotlight was on the sovereign yield curves of the countries of the euro area periphery. The ECB’s purchases of debt from these countries (in the secondary market) and the economic reconstruction programme proposed by the European Commission, which was announced towards the end of the month, reduced the risk premiums of Spain, Portugal and Italy by between 30 and 45 bps. Thus, at the end of the month, their spreads relative to the German bund were only slightly higher than those prior to the pandemic. Sovereign yields in Germany and the US, meanwhile, remained low. 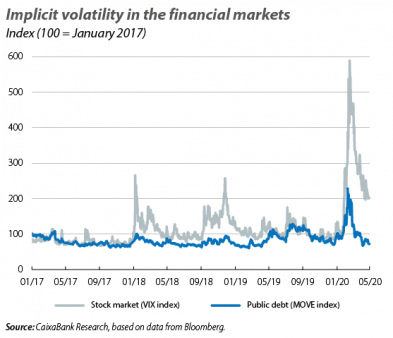 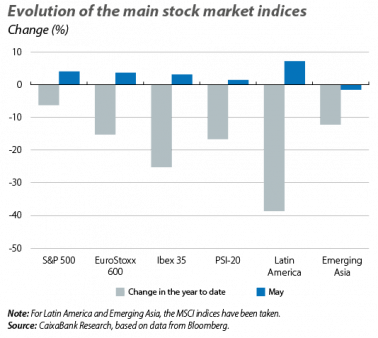 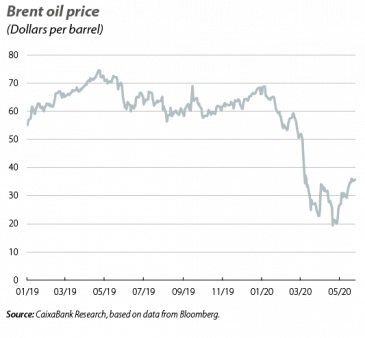 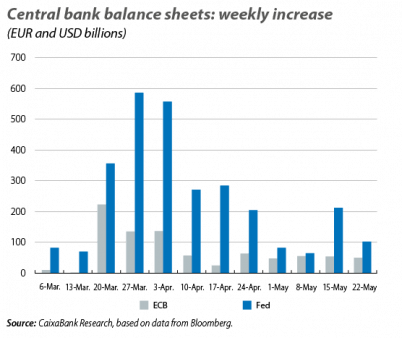 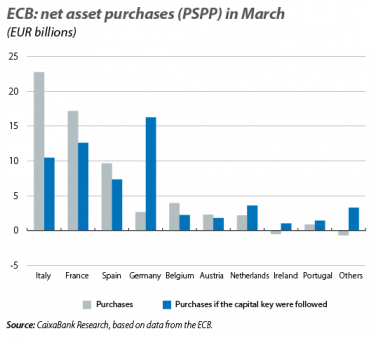 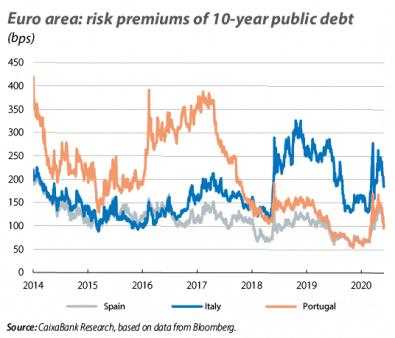 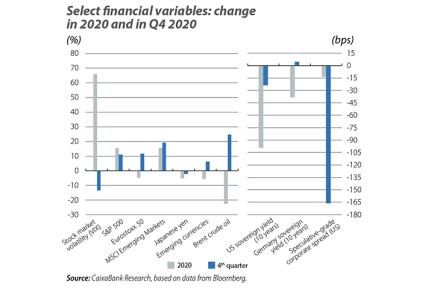 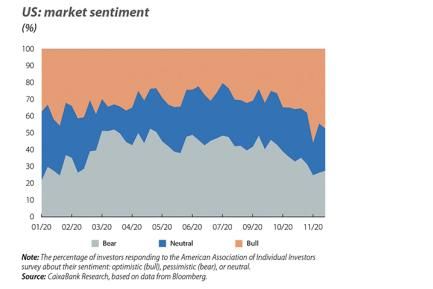 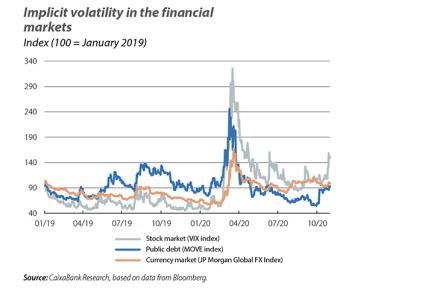