This is reflected in the improved sentiment in March shown by the latest indicators. In particular, in a month in which the restrictions were gradually eased, the Portuguese National Statistics Institute’s economic climate indicator rose to –0.7% in March, the highest level since July 2020, although the average for the quarter (–1.1%) was weighed down by the difficulties experienced in January and February. The improvement in sentiment in March was widespread across the various economic sectors (with the exception of construction), as well as among households (the consumer confidence index improved to –20.2 points in March). This improvement in the economic climate follows the stricter restrictions on activity in place in February, when industrial production fell by 2.4% year-on-year (–6.2% in January) and retail sales fell by 14.5% year-on-year (–10.7% in January), although online purchases helped to mitigate the decline in total consumption (they grew by more than 20%). Thus, the economic recovery in the quarter as a whole has been held back by the pandemic, but the indicators highlight a certain resilience in economic activity which has led the Bank of Portugal to keep its macroeconomic forecasts for 2021 unchanged (+3.9%) and even to revise those of 2022 upwards (5.7%, 7 decimal points above its December forecast). Over the coming quarters, consumption and exports are the components that are expected to contribute the most to the recovery, although investment will also play an important role, favoured by EU funds. However, the degree of uncertainty remains very high and the speed of the recovery will largely depend on the ability to accelerate the rate of vaccination against COVID-19: at the end of March, just over 10% of the population had been vaccinated with at least one dose, but the authorities plan to accelerate the rollout from the current 30,000 vaccines a day to 100,000-120,000 a day in April. 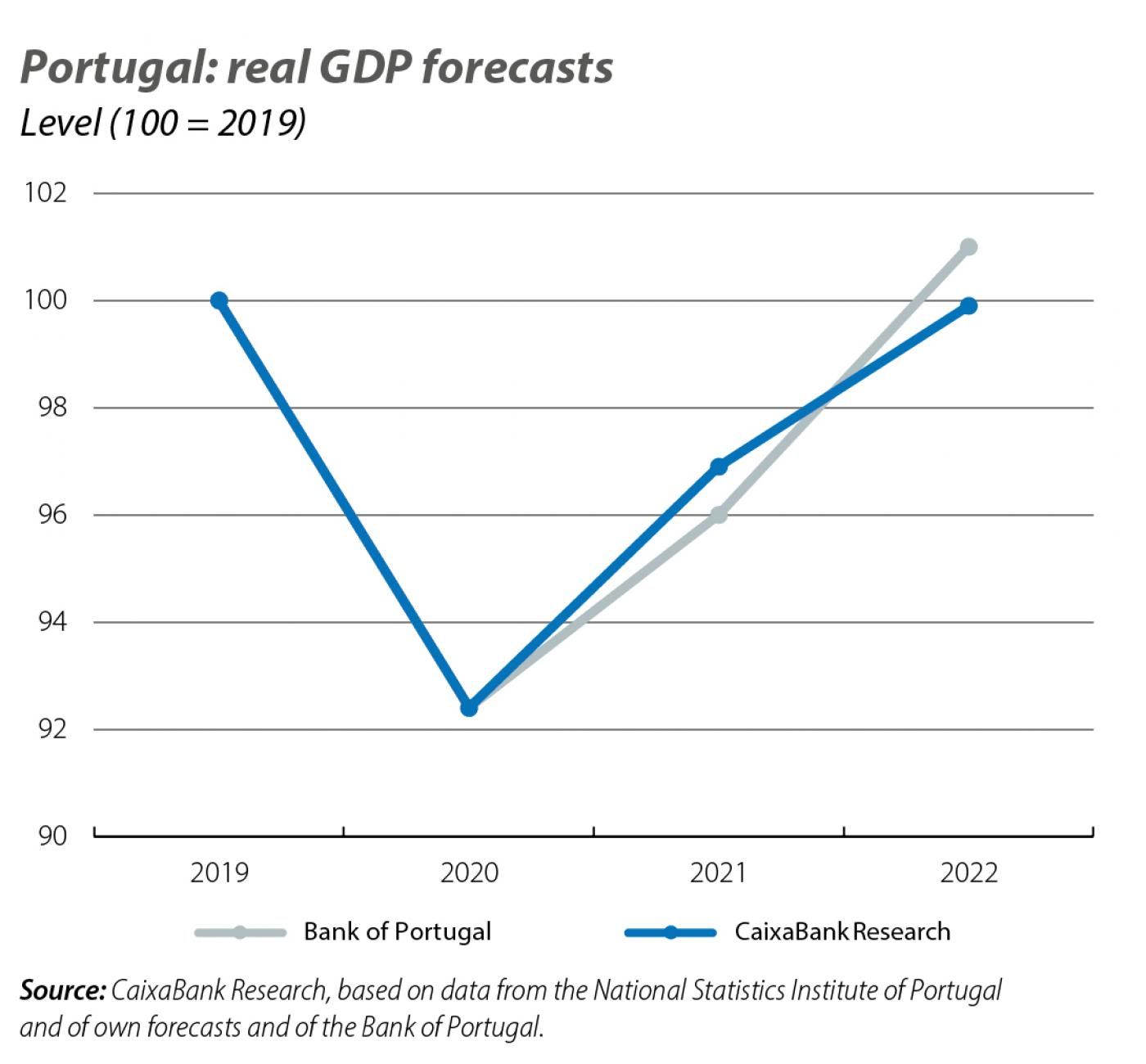 Employment continued to fall in the first month of the year

In January, a month marked by a widespread lockdown, the population in employment declined for the second consecutive month (–79,000 people, based on seasonally adjusted data), while the unemployment rate rose to 7.2% (6.8% in December). Registered unemployment also increased by more than 29,500 people between the beginning of the year and February, placing this indicator at its highest level since mid-2017. The impact of the pandemic is expected to become more apparent in the second half of the year, as the support measures for employment come to an end. 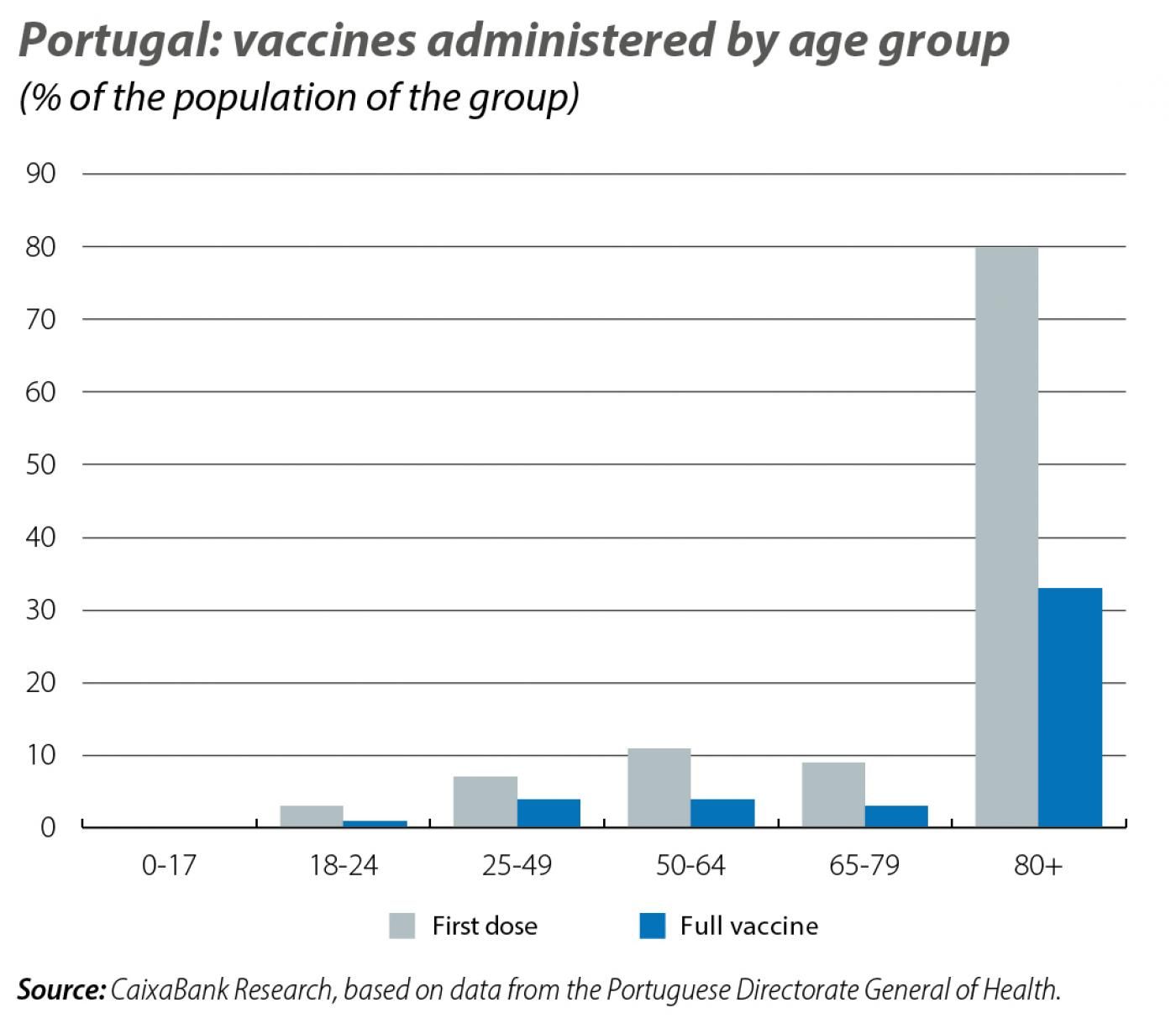 Unlike in previous recessions, Portugal maintained its external lending capacity in 2020

Unlike in previous recessions, Portugal maintained its external lending capacity in 2020 (+0.1% of GDP, 9 decimal points less than in 2019). Of particular note was the increase in the lending capacity of households, which reached 5.9% of GDP (+4.4 pps). This is a reflection of the increase in their savings rate up to 12.8% (+5.7 pps), forced by the lockdown and its impact on consumption, as well as precautionary reasons in an environment marked by uncertainty. These accumulated savings could offer households a buffer to help them cope with potential future increases in their costs, for instance when the credit moratoria come to an end from April 2021. In Q4 2020, real estate prices continued to rise (+8.6% year-on-year and +2.1% quarter-on-quarter), as did the number of sale transactions: 49,734 homes, +1% year-on-year and 10.2% quarter-on-quarter. For the year as a whole, there was a moderate slowdown in price growth to 8.4% (–1.2 pps compared to 2019), and the number of homes sold fell
by 5.3%. However, the real estate market tends to have a somewhat delayed reaction to GDP weakness, so the sector is likely to experience a slightly more pronounced slowdown in 2021. In addition, if the end of private moratoria (which reached around 17% of housing credit in February) is confirmed in April, and that of public moratoria in September, this would lead to additional finance costs for households, which could affect their home purchasing decisions. The pandemic pushed the public accounts into the red

The general government balance stood at –5.7% of GDP in 2020, a slightly less severe deterioration than that expected by analysts and the Portuguese government. This better-than-expected performance was due to greater revenue collection (+2,123 million euros), specifically income and wealth taxes, and lower expenditure execution (–801 million euros). COVID-related support measures, in terms of income and expenditure, amounted to 2.3% of GDP. The public debt ratio, meanwhile, reached 133.6% of GDP, +16.8 pps versus 2019, and exceeded 270 billion euros in 2020. In 2021, despite the foreseeable economic recovery, public spending will remain under pressure due to the extraordinary support measures in the context of the COVID-19 pandemic. Therefore, while we can expect some improvement in the government balance, it will still remain in deficit. Downward trajectory of loan moratoria since the peak registered in September

The stock of credit with moratoria reached 45,577 million euros in February, a slight decrease compared to the previous month (–100 million euros); that month, moratoria represented 15.8% of all private individual credit and 33.3% of that of non-financial firms. In the accommodation and catering sector, moratoria reached 58.6% of the stock of credit. Despite the pandemic, the non-performing loan ratio for the non-financial private sector declined to 5.8% at the end of 2020 (7.0% in 2019). New lending to the non-financial private sector, meanwhile, fell overall by 4.8% year-on-year in February, with increases in segments such as housing credit (+11.1% year-on-year) and reductions in others such as consumer credit (–39.7% year-on-year). In the case of companies, the decline was marginal (–0.2%). 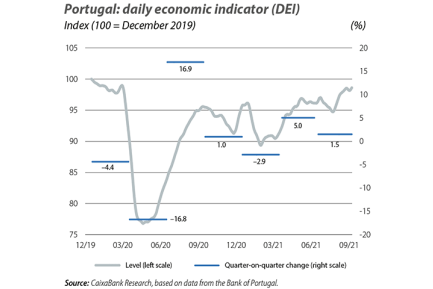 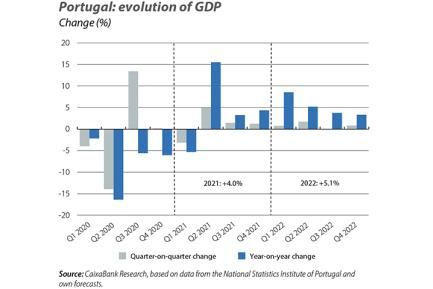 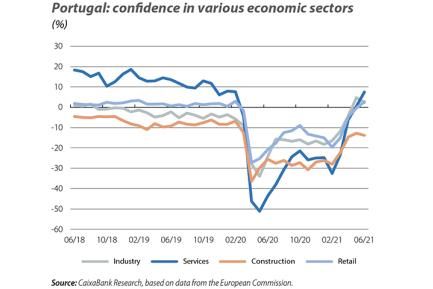