The Spanish economy sees a very gradual moderation in its growth rate. GDP ended the year on a good note, growing in Q4 by 0.7% quarter-on-quarter and 2.4% year-on-year. Thus, for the whole of 2018 the Spanish economy grew by 2.5% (3.0% in 2017). This was in line with analysts’ expectations and confirmed the gradual slowdown in economic activity towards more sustainable levels of growth. By component, domestic demand was the main driver of growth (+2.9 pps). This offset the negative net contribution of the foreign sector (–0.4 pps), which was weighed down by an international context that has deteriorated due to the trade tensions between the US and China and the uncertainties at the European level (Brexit, the conflict between Italy and the European Commission, and other factors restricting growth in the euro area). For 2019, we expect economic activity to continue to advance at a slightly more moderate rate than in recent years, but still above the rate of most countries in the euro area. Economic activity will be underpinned by the strength of job growth and persistent accommodative financial conditions in the euro area, which will continue to support consumption and investment. However, the persistence of a less favourable external environment and being surrounded by geopolitical and macrofinancial uncertainties suggests that external demand will continue to provide a very limited net contribution to growth.

The economic activity indicators are offering mixed signals. On the one hand, various indicators reflect a slowdown in industry, brought about by the poor performance of the energy sector (which is notoriously volatile) and the automotive sector. The latter has been particularly affected by the new European emissions regulations, as well as by the trade tensions. In particular, in November the industrial production index fell by 2.6% year-on-year (seasonally adjusted and corrected for calendar effects), while turnover in the sector fell by 2.7% year-on-year (three-month moving average). Furthermore, in December the PMI index for the manufacturing sector fell 1.5 points down to 51.1 points. On the other hand, the indicators in the services sector proved more encouraging. Turnover increased in November (+6.1%) and the services PMI index remained at a comfortable 54.0 points in December for the third consecutive month.

The labour market ended 2018 on a high note. According to data from the labour force survey (LFS), the number of people in employment increased by 566,000 in Q4 (four-quarter cumulative figure), a similar number to the increase in people registered with Social Security over the same period (564,000). As such, according to the LFS, the pace of job creation accelerated to 3.0% year-on-year in Q4 2018 following several quarters of a slight slowdown (2.5% in Q3 2018). This was partly brought about by the turnaround in public sector job creation, which rose by 4.4% year-on-year (+3.0% year-on-year in Q4 2017). Unemployment, meanwhile, dropped significantly in 2018, reaching 14.4% in Q4 2018 (a –2.1pp decrease over the past four quarters). Looking ahead to 2019, the improvement in the labour market is expected to continue. However, after an exceptionally good end to last year, the improvement speed is likely to moderate in line with the growth expectations for the Spanish economy.

The external surplus loses steam. In November, the current account balance remained positive, but fell to 0.9% of GDP (12-month cumulative figure), 0.9 pps lower than last year. The erosion witnessed in the past 12 months has occurred in a more adverse external environment, with an overall deterioration in the balance of goods (–0.5 pps versus November 2017) and a lower surplus in the balance of services (–0.4 pps versus November 2017). Specifically, the balance of trade for goods registered a deficit of 2.7% of GDP (12-month cumulative figure). This deterioration is largely attributable to the balance of non-energy goods and, in particular, to the contrast between the slowdown in non-energy exports (2.5% in November versus 3.2% in October, based on 12-month cumulative figures) and the strength of imports (4.0% in November and 4.1% in October). The trade surplus for services, meanwhile, moderated due to the slowdown in exports of non-tourist services and the increase in imports of tourist services. Over the coming months, the less favourable external environment and the pull of domestic demand on imports will probably continue to erode the current account balance, although the decline in the oil price in late 2018 could offer some relief.

The General State Budgets for 2019 incorporate a fiscal adjustment in revenues. The public accounts presented in January in Congress incorporate the majority of the measures already announced in the draft sent to Brussels in October, but with a greater reduction to the deficit, from 2.7% of GDP to 1.3% (–0.5 pps compared to the draft of October, after the Senate failed to approve the new deficit plan agreed with the European Commission). The positive effect of the business cycle would reduce the budget deficit by around 0.5 pps, making additional measures necessary to adjust the remaining 0.9 pps. The budgets place most of these measures on the revenue side (creation of a tax on financial transactions, a digital tax, a minimum rate for corporation tax, etc.), although their final impact is highly uncertain and they will be difficult to implement. Therefore, the adjustment could end up being less than that proposed, as has already been pointed out by the Bank of Spain and the Independent Authority for Fiscal Responsibility (AIReF). In any case, it should be borne in mind that the accounts are pending parliamentary approval, and if they are not finally approved, this would lead to a lower reduction to the deficit. 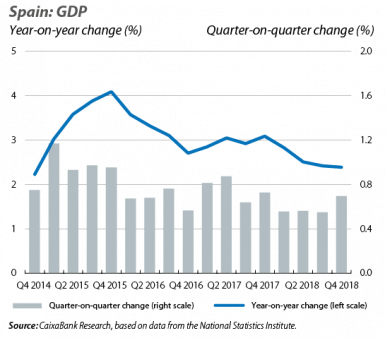 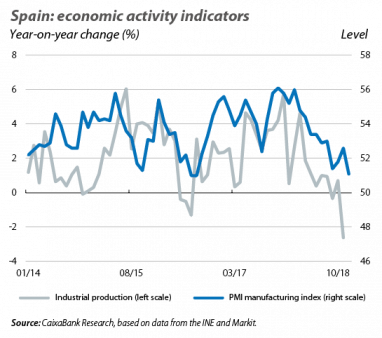 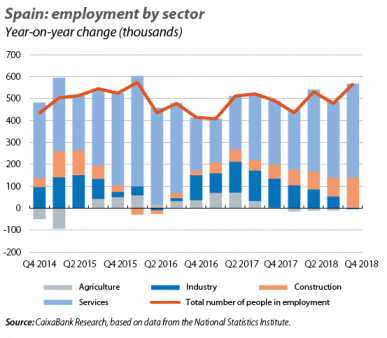 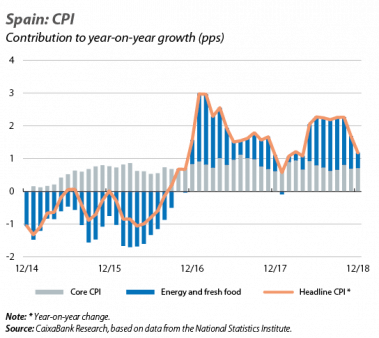 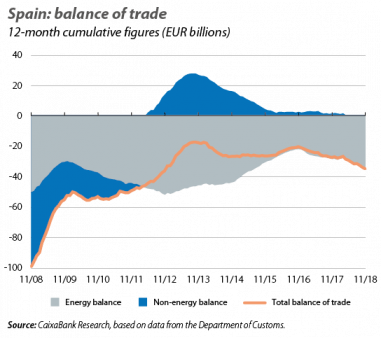 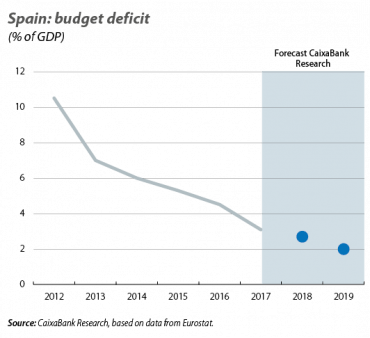