The United States leads the recovery

The IMF expects the world economy to grow by 3.5% in 2015 and by 3.7% in 2016, more than the 3.3% growth in 2014 but, in both cases, 0.3 pps below October's forecast. The recovery in 2015 is being influenced by lower oil prices, encouraging greater growth especially in advanced economies. Nonetheless there is still a long list of downside risks, especially geopolitical and financial, including the normalisation of US monetary policy. Apart from the forecast for the US, which has been improved again, the downward revision has been widespread across all countries: relatively moderate in the euro area and Japan and larger in the emerging economies (whose growth forecast for 2015 has been reduced from 5.0% to 4.3%), while China and India are still expected to grow by more than 6% in spite of their downward revision. The biggest revision has been for oil-exporting countries, especially Russia with a 2015 growth forecast that is now –3.0%.

GDP grew by a strong 0.7% quarter-on-quarter in 2014 Q4 thanks to the continued push by private consumption (boosted by low oil prices) and to the recovery in residential investment, offsetting the slight slowdown in non-residential investment and the reduction in public expenditure due to misalignments in the seasonally adjusted figure for military spending. Growth for the US economy for 2014 as a whole, affected by a weak Q1, is therefore 2.4%, 0.1 pps more than we expected. With a view to 2015, we have increased our forecast by 0.4 pps (to 3.5%), in line with the IMF forecasts (3.6%) and above the country's potential (which is around 2.2%). This higher forecast is supported by the better figures posted in Q4 and the price of crude oil, which we estimate will be somewhat cheaper in 2015 (specifically 20% lower than our January forecast). Moreover, the good tone of the US economy in 2015 will be helped by less fiscal adjustment and the continued recovery in the real estate sector. These factors offset the strength of the dollar, a certain slowdown in capital goods investment and wages whose growth is still disappointing.

The latest business indicators confirm the strength of the US economy. The field study regularly produced by the Federal Reserve (Beige Book) continues to endorse the country's expansion. In spite of their slight decline in December, business sentiment indices (ISM) are also in line with healthy growth for the economy as a whole, at the level of 55.5 and 56.2 points for manufacturing and services, respectively. Household consumer spending (which accounts for 70% of GDP) has been vigorous in the last four months, with a lower savings rate (the rise in consumer spending exceeds that of disposable income).

The strength of the labour market still does not generate wage pressures. 252,000 jobs were created in December, once again above the 200,000 figure that indicates a strong market. This brings the number of jobs created for the whole of 2014 to close to three million, doubling the historical average since 1980. The unemployment rate also fell by 0.2 pps to 5.6%, very close to the 5.0% of December 2007, at a time just before the start of the crisis. However, this undoubtedly positive trend has two downsides. The first is the continued stagnation of the participation rate (those in work and those looking for work) which fell slightly in December to 62.7% of the population aged over 16, far from the pre-crisis figure of 66%. A significant part of this difference is due to non-demographic factors, particularly the still high proportion of discouraged people who are difficult to relocate in the labour market. The second downside is the high degree of underemployment, in other words people forced to work part-time due to the current market situation but who would like to work full-time. The Bureau of Labor Statistics calculates a broad unemployment rate (called U6) which includes such underemployment and which, in December, stood at 11.2%, doubling the unemployment rate. The trend for this broad unemployment rate is also downwards but more slowly than the official unemployment rate, undoubtedly making any wage rises difficult.

Construction's contribution to GDP growth should increase in 2015. The crisis (and consequent loss of jobs) slowed up the formation of households, reducing demand for residential properties. This has created a considerable pool of households pending to be formed that should boost the real estate market in 2015 and 2016. The healthy figure of 1,089,000 housing starts (in annual terms) in December 2014 still has a lot of room for improvement as it is significantly below the average figure of one and a half million from the 2000-2007 period. This level could be reached as household formation gradually gets back to normal. One sign that this process is making headway is the fact that the share of vacant housing compared with all residential properties has now returned to levels prior to the bubble (3.5% in 2002).

US inflation is slowing up in spite of strong activity. December's CPI grew by 0.8% year-on-year, 0.5 pps below November's figure, due to the sharp decrease in the energy component, while core inflation (without food or energy) increased by 1.6% year-on-year, 0.1 pps below November's figure. It is therefore indicative that the Fed, at its January meeting, admitted that inflation had fallen substantially below its 2% target over the last few months. This, together with the lower forecast for oil in 2015, has led to a reduction in estimates for US inflation (from 1.0% on average to 0.5%).

The Prime Minister, Shinzo Abe, has presented a record budget to revive the economy in 2015. Public expenditure will increase by 0.5% due to the cost of pensions, a sharp increase in defence spending and a fiscal package worth 0.7% of GDP for low-income households and SMEs (precisely the sectors hardest hit by the weak yen). The government believes that a recovery in domestic demand is not compatible with further cuts. This is confirmed by household private consumption and consumer confidence being at low levels since the VAT hike last 1 April. Nevertheless, growth in tax revenue due to a larger contribution from VAT will help reduce the public deficit in 2015, while further assistance will come from the weak yen which, combined with falling oil prices, already led to a reduction in the trade deficit in December.

Inflation is still far from the Bank of Japan's 2% target. December's CPI grew by 2.4% year-on-year, 0.3% without the effect of the VAT hike, while the CPI without food (but with energy), the figure used by the BOJ as a benchmark, rose by 0.5% year-on-year discounting the VAT effect. On 26 January the BOJ lowered its inflation target for the 2015 tax year from 1.7% to 1.0%, introducing a downward bias to our inflation forecast for 2015 (1.4%).

China is slowing down but we still expect a soft landing. GDP grew by 7.3% year-on-year in 2014 Q4, bringing the annual figure to 7.4%, somewhat below our forecasts but a pleasant surprise for the consensus. This annual growth is the lowest since 1990, in line with the recent downward revision of the IMF's forecasts and the likely downward revision in the official growth rate (from 7.5% to 7%) in March. In line with the controlled slowdown pursued by the government and given the slight deviation from 2014's figures, we have revised downwards our growth forecasts for 2015 and 2016 by 0.2 and 0.1 pps respectively (to 7.0% and 6.6%). The latest activity indicators continue to point to a soft landing, with the industrial production index speeding up to 7.9% year-on-year in December and retail sales to 11.9%.

India benefits from cheap oil. Its central bank, which is following a strict monetary line, lowered its reference rate from 8.0% to 7.75% after several months of moderate inflation (5% in December), leaving the door open to further cuts. India's oil imports (when Brent was at 108 dollars/barrel) accounted for 5.3% of its GDP, double China's figure of 2.4%, and cheaper oil has therefore improved its macroeconomic situation, giving it room to manoeuvre and carry out reforms to push growth above 6.0%.

The prevailing tone is of disparity in the other benchmark emerging countries. Russia has entered an intense recession (we expect GDP to fall sharply in 2015) due to geopolitical uncertainty, falling oil prices and the rouble plummeting. In Brazil the new government has started off by announcing ambitious fiscal adjustment for 2015 equivalent to 1% of GDP. Such greater orthodoxy should help to restore investor confidence although it has forced us to lower our growth forecast for 2015 from 1.3% to 1.0%. 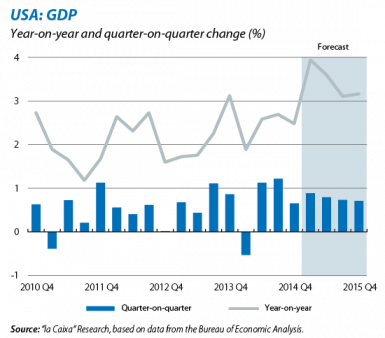 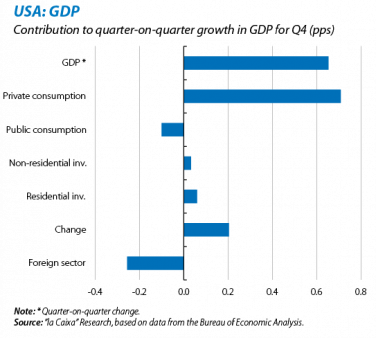 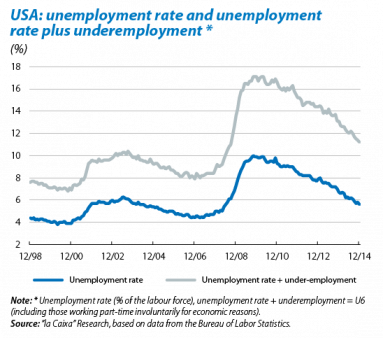 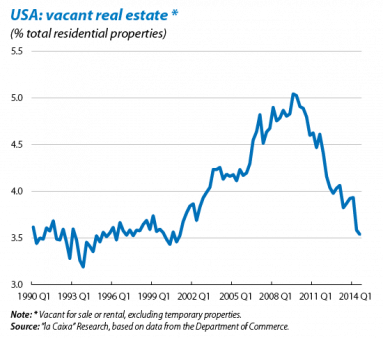 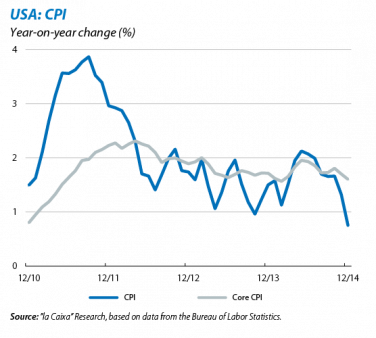 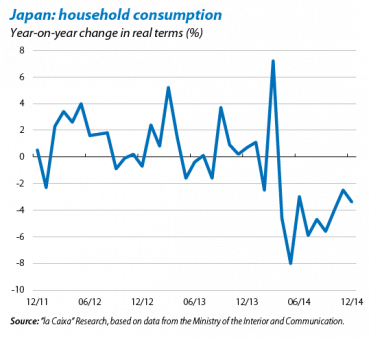