The US is on pause while China holds firm

According to the IMF, the world economy will grow by 3.1% in 2015 and by 3.6% in 2016, slightly below its forecast in July. Growth will be supported by a moderate recovery in the advanced economies while there is a slowdown in the emerging economies and increased downside risks due to doubts regarding China and the weakness of commodity exporters. The US has the strongest recovery among the advanced economies with expected growth of 2.6% and 2.8% in 2015 and 2016, respectively. Forecasts have been revised downwards for Japan, however, growing by 0.6% and 1.0%. Brazil has once again suffered one of the largest downgrades among the emerging economies and is expected to shrink by 3.0% and 1.0% in 2015 and 2016, respectively, while Russia is predicted to decline by 3.8% and 0.6%. China's growth forecast (6.8% and 6.3%) has remained the same, however, while India's forecast has only been reduced very slightly (7.3% and 7.5%).

Growth in US GDP slows down in 2015 Q3, but only temporarily. According to the first estimate by the Bureau of Economic Analysis, the US economy grew by a moderate 0.4% quarter-on-quarter in 2015 Q3 (2.0% year-on-year) compared with 0.6% in Q2. This is a weak figure due particularly to a non-recurrent adjustment in inventories, deducting 0.4 pps from the quarter-on-quarter growth in GDP. The picture painted for the rest of the components, which indicates the medium-term trend, is more favourable, however. Private consumption increased by a significant 0.8% quarter-on-quarter, as had been suggested by indicators of consumer confidence, while non-residential investment grew by a more moderate 0.5% quarter-on-quarter. The drop in defence spending was offset by an increase in other items in the component of public consumption. The weakness of this growth, greater than expected, has led us to revise downwards our growth forecast for 2015, to 2.5% (previously 2.7%). With a view to 2016 we have also revised slightly downwards our main scenario, which now predicts growth of 2.5% (previously 2.7%) as we expect a stronger dollar given the ECB's extension of quantitative easing. Nonetheless we remain positive about the US expansion, supported by consumption, investment (both corporate and residential) and less fiscal consolidation. The Fed's message in October was framed within this expansionary situation, reinforcing the possibility of interest rate hikes beginning in December (coinciding with our main scenario).

Consumption and housing indicators suggest the expansionary phase will continue in the US. In October the Conference Board consumer confidence index (97.6 points) lost some of its strong upswing from September (102.6) but, supported by a very positive perception of the current situation, is still 5 points above its historical average. The real estate sector is also performing well with sales of second-hand properties increasing and the NAHB index for developer sentiment (which takes prices and sales into account) reaching 64 points in September, its highest level since October 2005. The ISM business sentiment indices were more ambiguous in September, however, recording a second month of decline although still at levels in line with economic expansion.

The labour market will continue to boost consumption, the mainstay of the US expansion. In spite of the slowdown in the rate of job creation over the last two months, the labour market is still recovering. 142,000 jobs were created in September and although this figure was below the threshold of 200,000, the monthly average for the year to date (198,000) continues to point to a dynamic labour market. Unemployment also remained at a low 5.1%. However, wages, benefitting from the still considerable level of under-employment, once again rose by a contained 2.2% year-on-year, far below the zone of normality of 3%-4% set by Janet Yellen a few months ago. Meanwhile prices provided a positive surprise in September, in particular September's core inflation figure, which excludes the prices of food and energy, standing at 1.9%, its highest since February 2013. The general CPI posted a zero year-on-year change, kept down by energy prices which accumulated a year-on-year drop of 18.4%.

We expect the second half of the year will be stronger for Japan. The acceleration we predict over the coming months is based on more dynamic consumption boosted by oil remaining cheap and low inflation, helping to support the purchasing power of households. Given this situation, GDP growth for 2015 Q2 was revised slightly upwards.

In spite of the expected acceleration, China represents a downside risk. The weak demand in China and US for Japanese goods is preventing the cheap yen from benefitting exporters (mostly large firms) as much as it has in the past. The yen's depreciation has also made imports more expensive for consumers and small and medium-sized firms, which import intermediate goods. Industrial production, closely linked to the economy's growth in general, has remained flat in spite of the monetary stimuli which started to be implemented in 2013. Nonetheless, in October the country's central bank decided not to intensify its asset purchase programme (currently totalling 80 trillion yen a year, 16% of GDP).

China's GDP growth in Q3 was surprisingly high, up by 6.9% year-on-year, only slightly below the 7.0% posted in Q2. This rise, higher than our forecasts, has led us to carry out a technical upward revision of our GDP growth forecasts for 2015 to 6.8% (previously 6.7%). Nonetheless, the downside risks are still high. Proof of this are the measures which the Executive continues to implement to boost growth, most recently the central bank's further cut in the official interest rate (of 25 bps to 4.35%), the fifth reduction of the year so far. It also reduced the cash reserve ratio by 50 bps (to 17.5% for most large banks). At the same time the monetary authority also announced it would suspend the limit on bank deposit interest rates, representing another step towards liberalising and modernising the financial system. In fact, the need to reform the country's financial system was once again mentioned at the 5th Plenary Session of the Central Committee of the Communist Party of China, which took place at the end of October, drafting the lines of action to be followed by the country over the next five years (2016-2020). It was also decided to suspend the one-child policy, allowing couples to have two children, and emphasis was also placed on the Executive's desire to maintain medium growth (6.5% for 2016) that also respects the environment and is compatible with a shift towards a more consumption and services-based economic model.

Brazil has yet to redress its problems. The latest indicators confirm that activity has continued to fall without the most pressing imbalances improving to any noticeable extent (in particular inflation, which climbed to 9.5% in September). Political uncertainty is also increasing. 80% of the measures contained in the fiscal adjustment programme proposed for 2016 by Dilma Rousseff's government require parliamentary approval which, at present, is difficult to guarantee. Moreover, the Court of Auditors has yet to validate the 2014 accounts and Rousseff may even be impeached (a scenario we believe to be highly unlikely). Given this situation, the President has reshuffled the Executive to reinforce her support in Congress. The combined effect of sluggish activity, political uncertainty and the impact of the fiscal adjustment in 2016 (valued at 1.2% of GDP) have warranted a downward revision of our main scenario for GDP growth: from –1.8% to –2.3% in 2015 and from +0.4% to –0.6% in 2016.

Turkey's growth in Q2 was surprisingly high but downside risks have increased. GDP grew by 3.8% year-on-year in Q2, notably above the forecasts and the figure posted in the previous quarter (2.5%). The strength of domestic demand, in particular the acceleration observed in investment and public consumption, is the main factor behind this spurt from activity. However, the economic outlook for Q3 is more subdued due to the increase in political risks both internally (political conflicts) and externally (Syria), as well as the worsening of the exchange rate crisis. Although the incumbent party, the AKP (moderate Islamists), are likely to win an absolute majority in the elections on 1 November, thereby reducing the internal political instability, there is no guarantee the country's huge macroeconomic imbalances will be redressed or its external geopolitical risks reduced. We have therefore revised downwards our growth figures: from 4.0% to 3.3% in 2016. 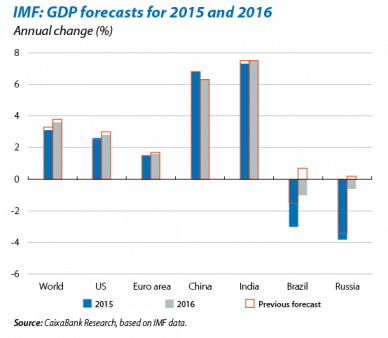 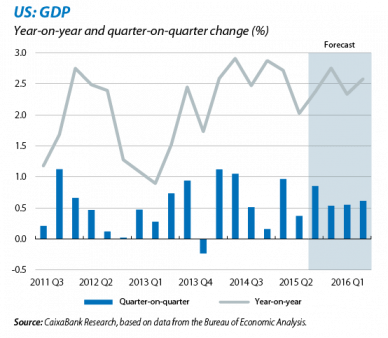 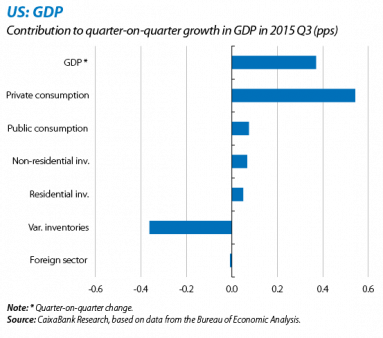 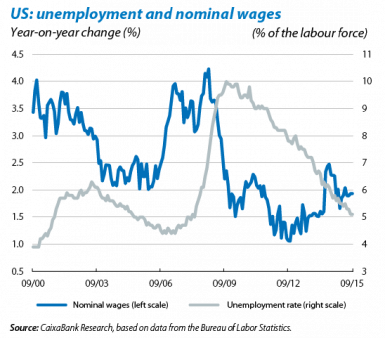 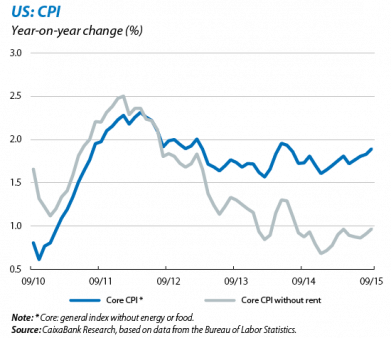 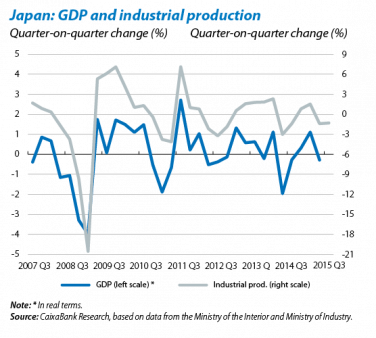 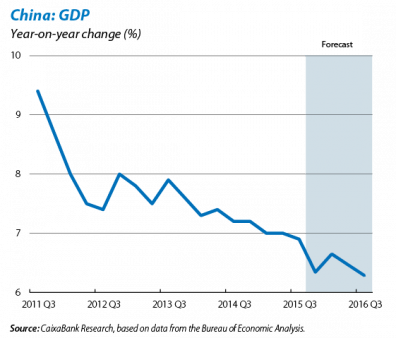 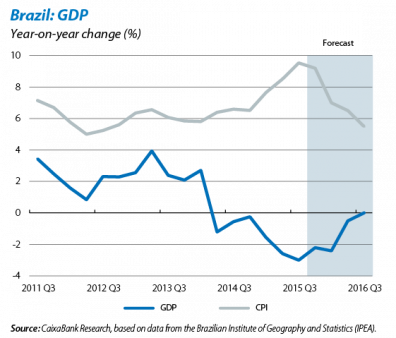 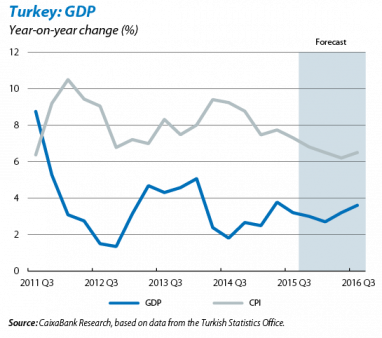