Global growth may still have been positive in Q3 2022, thanks to an expected rebound in China following the lockdowns imposed during Q2 2022. However, the substantial deterioration apparent in the main business climate and opinion surveys at the global level points towards a much bleaker picture for the coming months. Financial conditions have been significantly stressed as a result of the response from the major central banks in their attempt to curb inflation, which stands close all-time highs in many developed economies, and we are likely to see further rate hikes in the coming months. The housing market is beginning to feel the impact of this increase in rates, and higher mortgages will make a dent in households’ spending decisions, which are already constrained by higher energy bills and prices of other goods. For the time being, the labour market is holding up and in most developed economies the unemployment rate is at its lowest rate in around 20 years. However, we are beginning to see signs of moderation in the pace of job creation, and in Europe the ECB itself has already pointed out that rate hikes will have an adverse effect on the labour market. Also, among emerging markets, China continues to show much lower growth rates than we have been accustomed to, in a context of a sharp deterioration in its housing market. The GDP declines registered in the first half of the year were largely due to a fall in inventories – a highly volatile component which ought to make a positive contribution in the second half of the year. In contrast, the strength of the labour market, household spending and various industrial activity indicators confirmed the resilience of domestic demand. However, the deteriorating global context, the strength of the dollar and the additional rate hikes will significantly increase the downside risks for next year, making the prospect of a «real» recession in the country more likely. Thus, we lower our forecast for 2022 as a whole (to 1.6%) and reassert our position in anticipating modest growth of 1.1% in 2023. Although for now we are still confident that the economy will be able to maintain positive growth rates, we anticipate that they will be modest and well below potential for the next year and a half. As for inflation, we estimate a rate of 3.4% on average for 2023, virtually unchanged since the previous report. 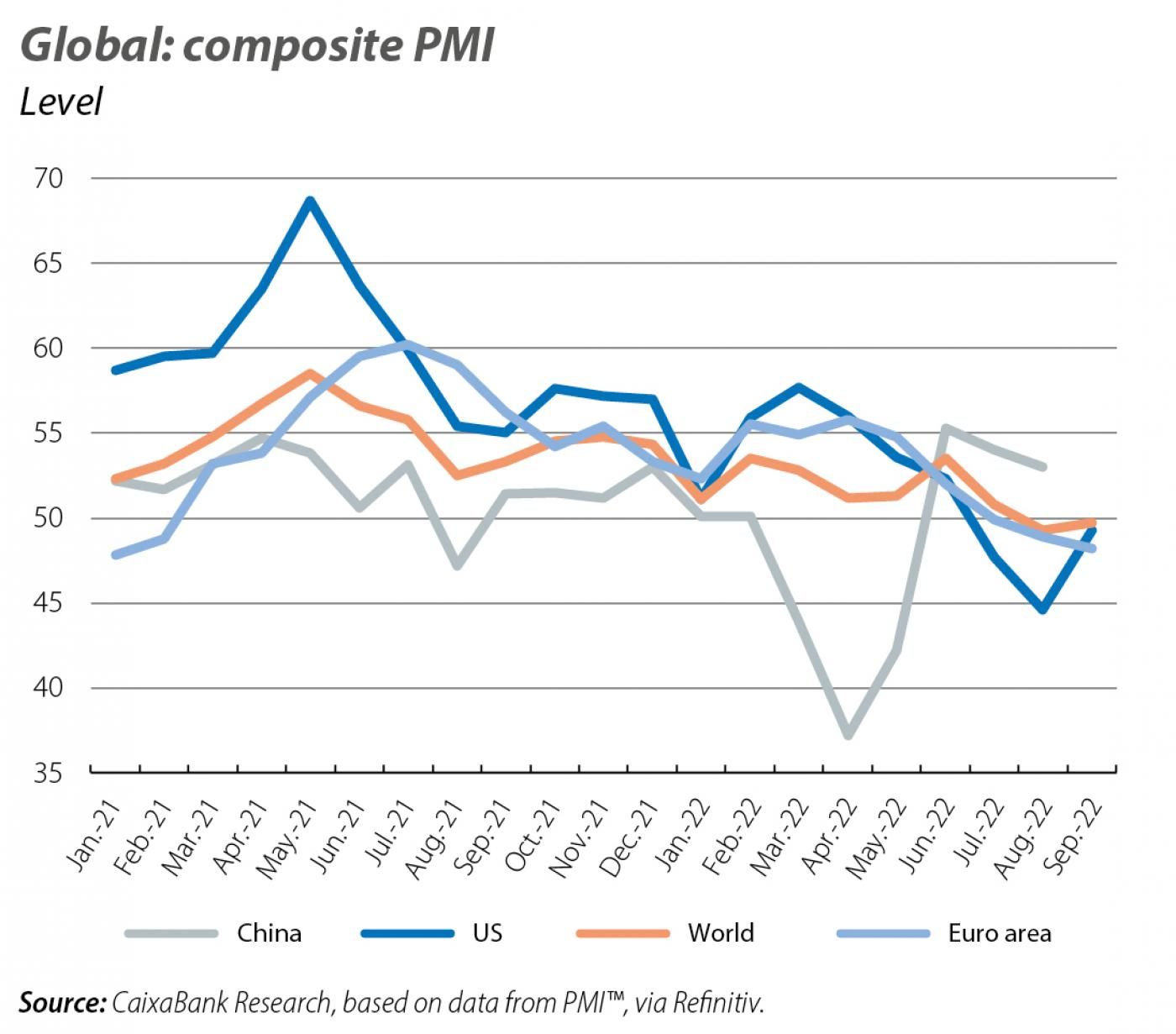 The total cut-off of Russian gas supplies via Nord Stream 1, the main supply route, coupled with the zero probability that supplies will be resumed in the coming months due to the rupturing of the Nord Stream 1 and 2 pipelines, will intensify the energy crisis that Europe is already experiencing. The region’s economies have been preparing for a cut-off for several months now, and this has translated into average gas reserves in the EU reaching 90% of total capacity by the end of September, two months ahead of the November target.

The energy crisis at the heart of Europe’s deterioration

However, this significant level of reserves already reached barely covers three months of consumption at the current rate, which explains why the Commission continues to insist on the need to save in order to avoid energy rationing during the winter. Indeed, according to CaixaBank Research estimates, a 7% reduction in energy consumption would allow the EU to make it through to March 2023 with its reserves still at 10% (see the article «The outlook for gas supplies in Europe: a balancing act» in the Dossier of this report). Moreover, this substantial stockpiling of gas has been achieved at the cost of paying extraordinarily high prices for alternative supplies to Russian gas. Governments are also still implementing measures aimed at mitigating the impact of high energy prices on households and businesses, and this will have a negative impact on the public accounts, which are already under pressure due to the measures implemented during the COVID-19 pandemic. 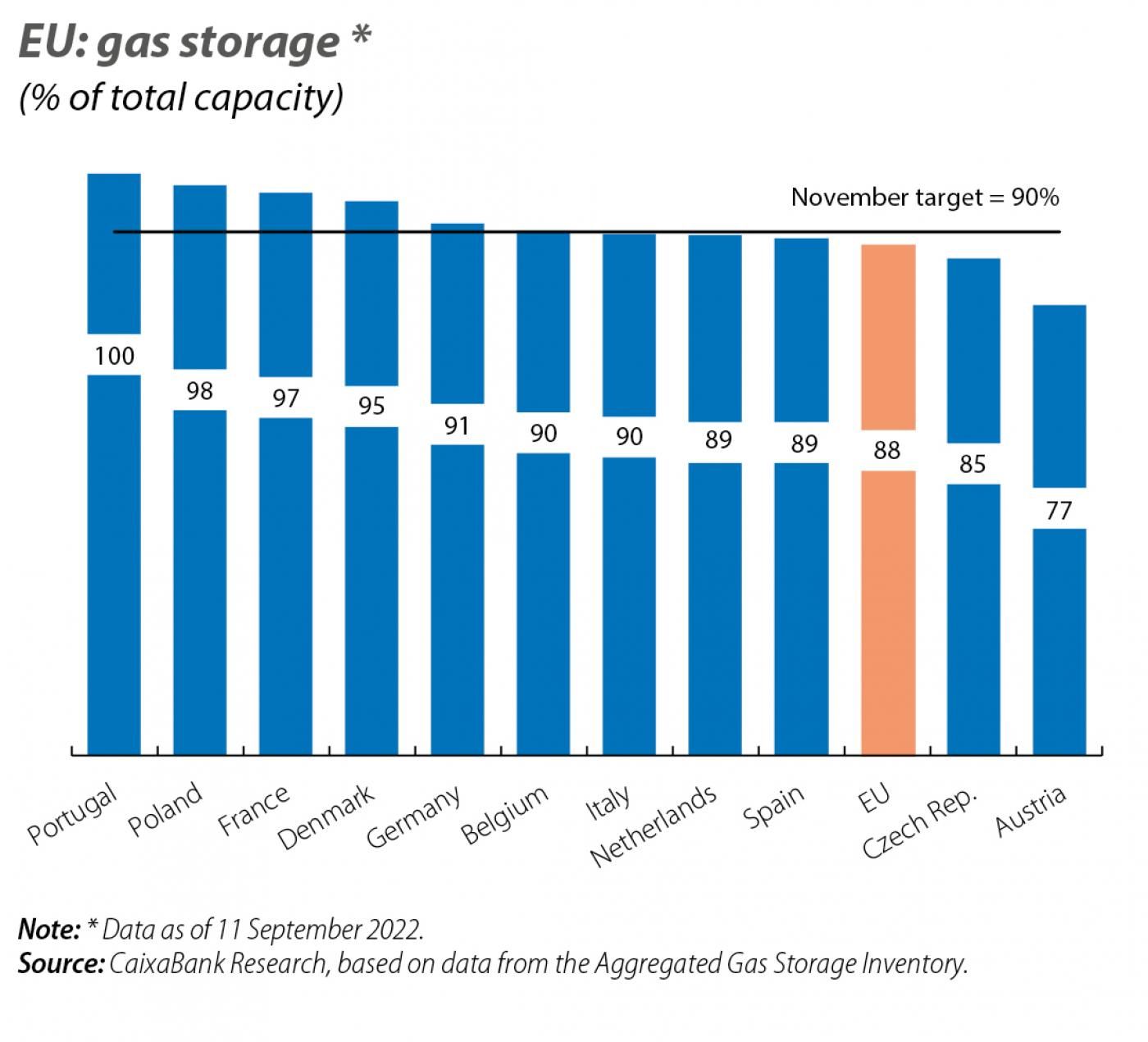 Given the seriousness of the situation, the Commission has designed a common strategy to reduce energy bills

The measures envisaged include establishing a cap on the gas price which «marginal» energy producers can charge, as well as levying a 33% windfall tax on the excess profits of fossil fuel companies. The extra funds obtained through these two initiatives (estimated at around 140 billion euros) would be redirected by each Member State to the households and businesses hardest hit by the rise in energy prices. The context for Europe appears to have deteriorated substantially since the summer, reflected in the sharp declines in the main business climate indicators, in most cases, to levels compatible with a contraction in economic activity. As a result, we have made a substantial downward revision to expected growth for the euro area, working on the assumption that GDP will fall in Q4 2022 and Q1 2023 and that the recovery that will follow beginning next spring will be very modest and fragile. Specifically, for the euro area as a whole, and following 3.1% growth in 2022, our new scenario envisages an average growth rate of 0.2% in 2023 (1.5 pps below our summer forecast). Moreover, there will be significant differences from country to country: among the large economies, Germany and Italy will lead the falls in economic activity in the coming quarters, while France and Spain will be much less affected. On inflation, we revised our estimate significantly upwards, following the recent rises in gas prices, with a fairly similar increase anticipated among different countries. 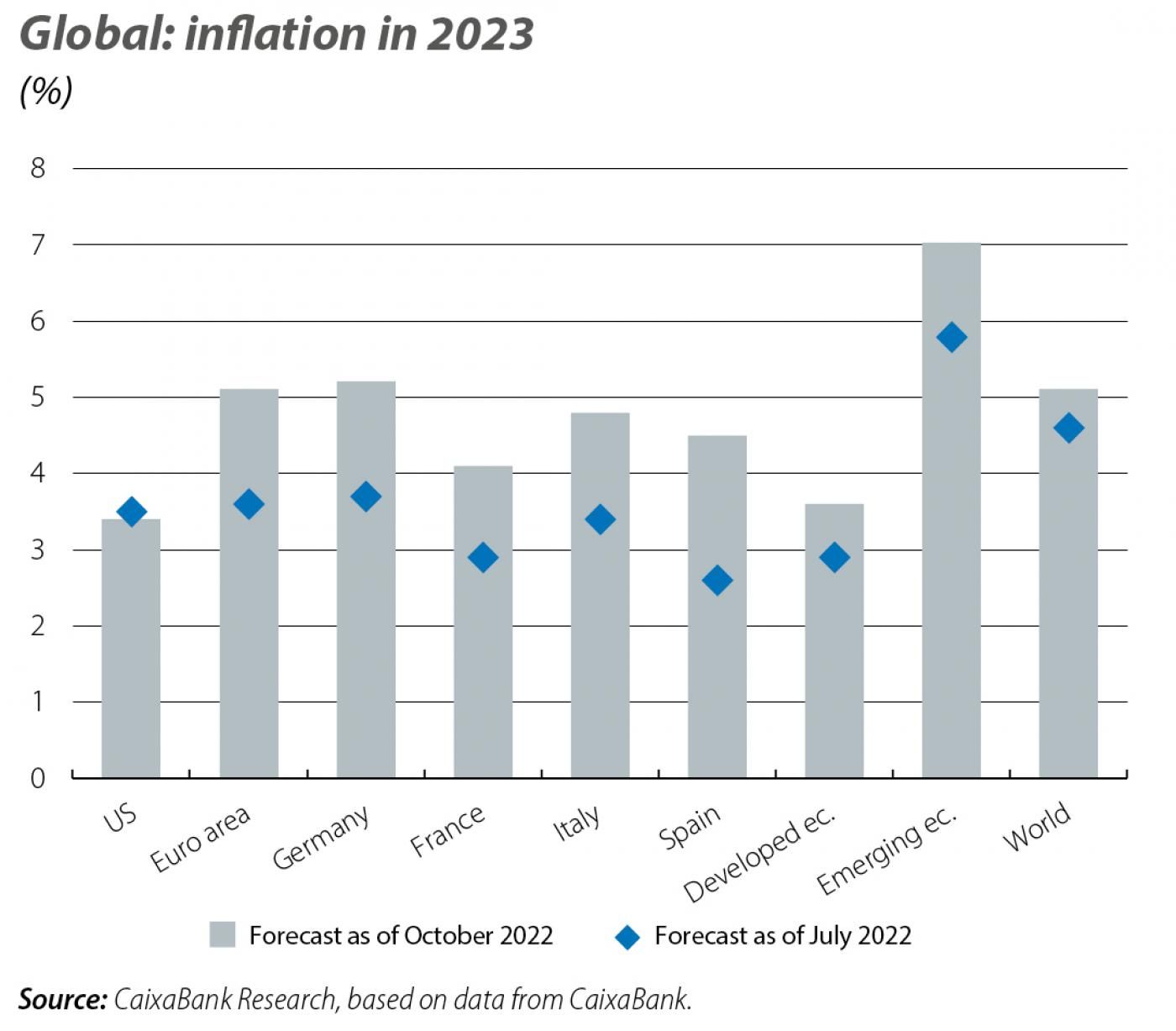 The United Kingdom announces the biggest tax cut in 50 years

The government of the new prime minister, Liz Truss, has presented an ambitious «growth plan» which aims to place growth at a trend rate of 2.5%, based on three pillars: reforms aimed at boosting supply, fiscal responsibility and tax cuts. In fact, it proposes tax cuts amounting to 160 billion pounds up to 2027, mainly through (i) the cancellation of the corporation tax increase (it remains at 19%, well below the OECD average of 23.5%) and (ii) the reversal of the 1.25-pp increase in social security contributions. In addition, an expenditure of around 60 billion pounds will be approved for the next six months to compensate businesses and households for the sharp rise in energy bills, which will substantially raise the fiscal deficit in 2022-2023. The significant impact this plan will have on the dynamics of UK debt has generated major turbulence in the European debt markets and sunk the pound to an all-time low against the dollar (see the Markets section). In short, the outlook for the economy has deteriorated significantly, and we expect GDP to fall by 1.3% in 2023. 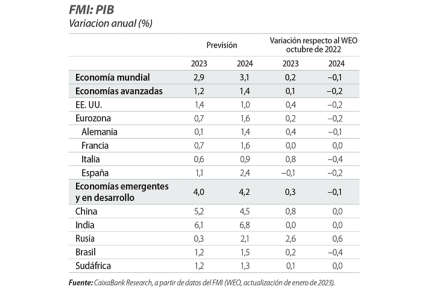 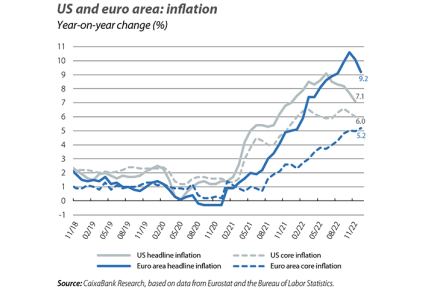