Global economic activity is still growing at a strong rate. The summer months have offered few surprises regarding the trend in the world growth cycle. Judging by PMI economic activity indicators, the global economic growth rate is similar to before the summer, in particular helped by the advanced economies. However, emerging indicators have weakened slightly although they are still above the 50-point threshold, implying their economic activity is still expanding. This trend, which reflects the overall situation at present, endorses the view that the world economy will grow by 3.5% in 2017. This is considerably faster than in 2016, when GDP rose by 3.1%. The risks are still generally downside, however, as the main sources of concern before the summer (geopolitical, policy and strictly economic) have not altered to any great extent.

The US economy speeds up in Q2. During this period, GDP grew by 0.8% quarter-on-quarter compared with 0.3% in Q1. In year-on-year terms, GDP grew by 2.2% (2.0% in the preceding quarter) although the year-on-year change is lower than usual due to the historical series being revised, with the 2015 figure now higher than the previously published figure. By demand component, this acceleration in the growth rate was primarily due to higher growth in private consumption and a recovery in public consumption. Moreover, inventories did not make a negative contribution this quarter, unlike Q1. We can determine the immediate outlook for US economic activity using national account data from Q2. First, the composition of GDP growth alone suggests the economy may expand even faster as the advance is largely due to household consumption, a macroaggregate figure that accounts for 70% of GDP and is normally slow to change trend.

Sustained economic activity in Q3. In addition to the good composition of Q2 growth, lead economic activity indicators for Q3 also suggest that the rate of economic activity continues at a similar level to the previous quarter. In particular, consumption indicators point to household spending remaining strong. This is largely the result of a dynamic labour market. 209,000 jobs were created in July, in addition to an already considerable figure in June when 231,000 net jobs were added to the economy. Given this expansionary situation for labour, the unemployment rate fell by 0.1 pp in July to 4.3%. Meanwhile wage growth remained at 2.5% year-on-year.

Inflation is contained. The downward trend in inflation is still paradoxical, at least to some extent, considering the economic cycle is at a mature stage and economic activity is speeding up. Whereas January’s CPI was 2.5% higher than a year earlier, in July the year-on-year increase was just 1.7%. Since growth in the underlying core index (without food or energy) has also slowed down, from 2.3% in January to 1.7% in July, this contained trend in prices cannot be attributed to volatile factors such as oil prices. Given this situation, what monetary policy actions can be expected from the Fed? Judging from the minutes of its July meeting, the key to the Fed’s assessment is the view that this reversal in inflation is temporary and that it will recover towards 2% year-on-year in the medium term. Consequently, the central bank is likely to begin the process to reduce its balance sheet over the coming months, as well as gradually raising the fed funds rate.

Strong growth in Japan. Japan’s GDP saw dynamic growth in Q2 2017, up by 1.0% quarter-on-quarter (2.1% year-on-year), more than the 0.4% rise of the previous quarter. The country has now posted six consecutive quarters of positive growth, something it has not seen since 2006. This growth was supported by robust investment, especially public, and higher private consumption. Unlike previous quarters, exports declined in real terms. In spite of these strong figures, given the absence of any far-reaching structural reforms and the volatility inherent in Japan’s GDP series, its growth rate is likely to be considerably lower over the next few quarters, although still positive. Like the US, this faster growth is occurring together with a price trend that indicates a lack of inflationary tensions (up by 0.5% year-on-year in July).

The emerging economies are performing satisfactorily although there are still sources of uncertainty. As mentioned above, the emerging economies on the whole have recorded notable growth in their economic activity. This can be seen, for instance, in the IIF inndicator which estimates aggregate growth for the main emerging countries (IIF growth tracker). This indicator suggests the GDP growth rate for the emerging bloc was still high at the end of Q2. The latest indicators have also tended to outperform expectations, as shown by the indices of «economic surprises» which monitor the gap between actual and forecast macroeconomic figures. In response to these more constructive indicators, inflows of capital flows for the emerging economies have tended to pick up over the past few months.

Asia: in Q2, the Chinese economy remains firm while India wanes. The Chinese economy grew by 6.9% year-on-year in Q2, unchanged from its rate of growth in Q1. National account data, together with the most recently published indicators, suggest the economy is still enjoying high and stable growth. No great changes have been seen in the area of prices either. The CPI was up by 1.4% year-on-year in July, a similar figure to June (1.5%). On the other hand, in Q2 India’s GDP grew by 5.7% year-on-year, less than the 6.1% posted the preceding quarter and below expectations. This means the Indian economy has been slowing down for the last five quarters in a row. One of the reasons behind this decline in economic growth has been the introduction of the new goods and services tax (GST), which came into force on 1 July. In spite of this weak tone, as the series of temporary shocks in the last few quarters are overcome (monetary change and GST), the country’s future outlook will become slightly more promising.

Russia speeds up its growth thanks to oil. Political uncertainty is one of the aspects affecting, to a greater or lesser extent, the economic trends in some of the benchmark emerging economies. Nevertheless, each country is set apart by its own idiosyncratic aspects. Russia, for instance, is finally putting its harsh 2015-2016 crisis behind it. The economy posted 2.5% year-on-year growth in Q2 compared with 0.5% in the previous quarter. Although details on the components are not available, the recovery in oil prices is likely to be a fundamental reason for this acceleration in growth. However, and in spite of this recovery in GDP terms, the underlying sensation is still one of a fragile recovery. This is partly because the economy is still suffering from the effects of international sanctions. Given the territorial tensions on Russia’s borders, this factor might become even more important in the future.

Brazil and Mexico, burdened by uncertainty. Although President Temer narrowly avoided being tried for alleged corruption, institutional uncertainty still hovers over Brazil. Indicators confirm the country is recovering its growth rate but this will probably occur at a slower pace than would be the case if such uncertainty did not exist. Mexico, however, has gone from posting 2.8% year-on-year growth in Q1 2017 to just 1.8% in Q2. The country seems to be starting to feel the effects of persistent political uncertainty, both domestic (presidential elections in 2018) and foreign (vital NAFTA negotiations beginning in August). 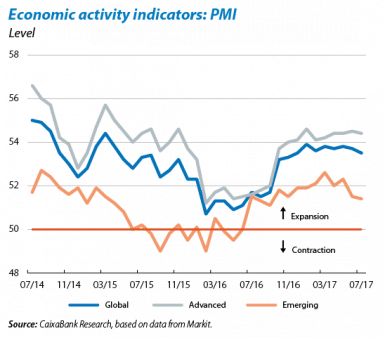 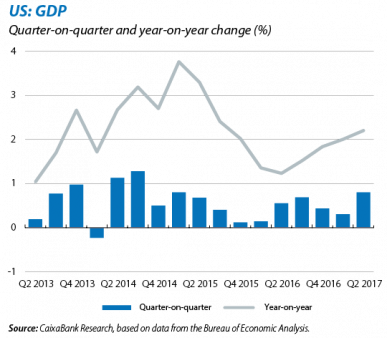 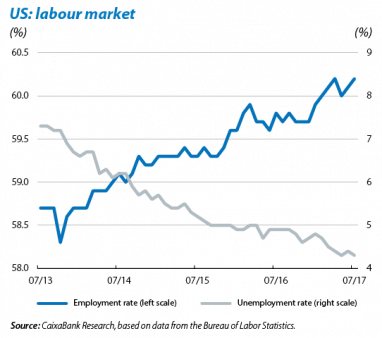 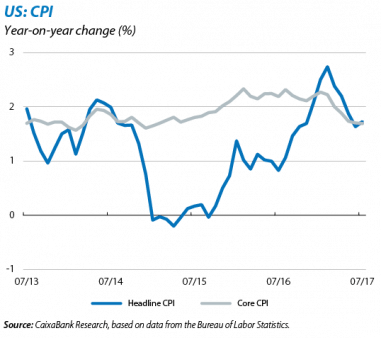 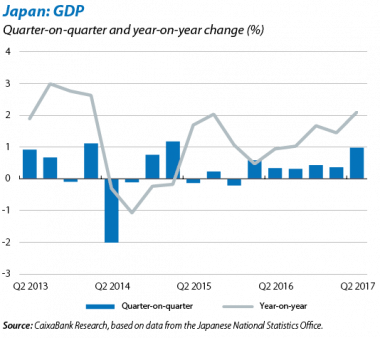 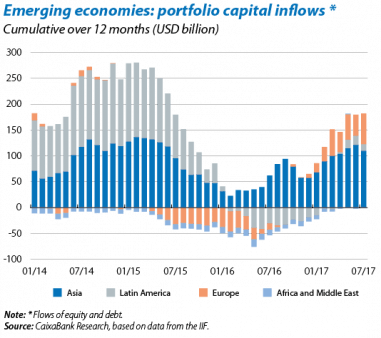 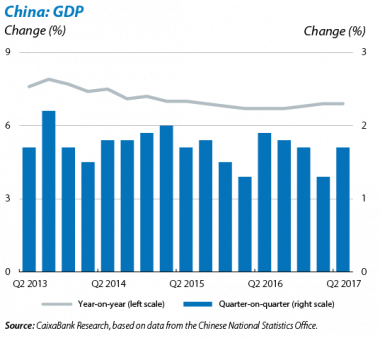 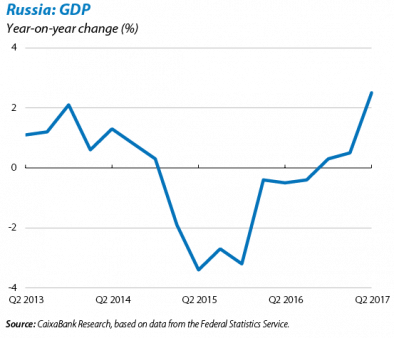 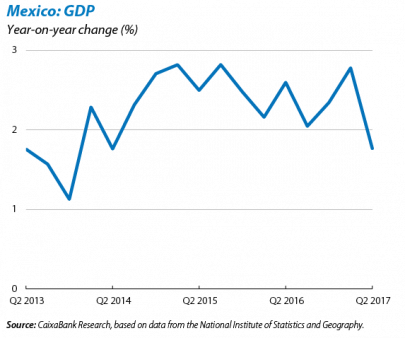