The encouraging path of exports

A good measure of a country's degree of internationalisation and, by extension, the state of its economic health is to analyse the performance of its exporting firms. To do so, and to determine whether the situation will continue in the future, we can use some simple calculations and compare them over time.

During the real estate boom from 2003 to 2007, the number of exporting firms remained steady in Spain at around 100,000. In the year 2013, 137,000 firms were selling abroad (undoubtedly one positive side effect of the financial crisis was Spanish firms opening up to markets abroad). It can therefore be assumed that the number of companies in a country that are internationalising their products is a good indicator of how dynamic its exports are. However, let us assume that Spain has two companies. One firm exports to country A in 2011 and in 2012 also exports to country B. The other firm does not export in 2011 but exports to country B in 2012. In 2012, the number of exporting firms increases by one but by two in terms of destinations. In Spain, between 2010 and 2012 the number of new destinations rose by 105,000, four times more than the increase in new firms. The USA accounts for 9.2% of this rise, followed by China (5.7%) and Switzerland (4.0%). All these data suggest that the real extent of a country's internationalisation does not only depend on the number of companies exporting but also on the diversification of their destinations.

If we add the volume of exports to our analysis, we can also determine whether the internationalising drive has room to grow. In those countries where, between 2008 and 2010, the number of exporting firms increased above the average, we can see that, on average, exports also rose by 35% more between 2010 and 2012. These data therefore point to a reliable relationship between the volume of exporting firms today and that of exports tomorrow.

To complete our analysis, we would like to determine whether the fact that a company enters into a new market in one country can also help it enter into other countries in the future. Recent academic empirical studies, such as the one by Chaney(1) in France, back this hypothesis. In Chile, Morales et al.(2) document the concept of «extended gravity», according to which, if a country exports to one country today, tomorrow it is more likely to export to another country with the same continent, same language and border. The authors' estimates suggest that, for example, exporting to Canada would reduce the cost of entering into the USA by between 22% and 42%.

In conclusion, all the evidence points to the recent internationalisation drive by Spanish firms having room to improve: this will help the number of destination countries to increase and to consolidate the upward trend in exports. 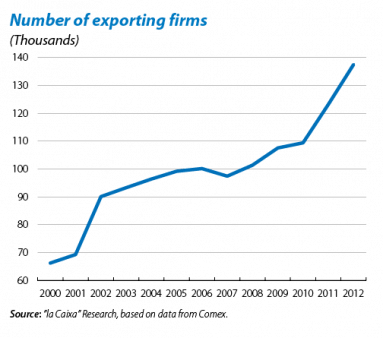 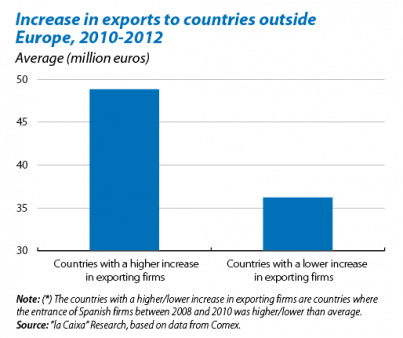