The expansion continues but uncertainty grows after Donald Trump’s victory

Global growth continues to progress at a good pace after the positive data posted in Q3. The Q3 growth indicators have been positive and somewhat higher than expected in the advanced countries while an acceleration in growth has been confirmed in the emerging ones, in line with our forecasts. The world economy is now expected to grow by 3.1% in 2016, a very similar figure to the 3.2% recorded in 2015, and will accelerate notably in 2017 with a predicted growth of 3.5%.

However, the uncertainty surrounding the macroeconomic scenario has increased after Donald Trump’s victory and will remain high at least until the stance of the new US administration becomes clear. In the short term this stalemate could bring about a more pronounced upswing in long-term interest rates and financial instability in key emerging countries. After D. Trump’s victory, capital outflows from the emerging countries to levels not seen since the taper tantrum of 2013 and the depreciation of these countries’ currencies, particularly the Mexican peso and Turkish lira, illustrate such fears. However, the bulk of the evidence suggests that the agenda applied by the new US President will be pragmatic as he needs the support of the Republican Party’s moderate wing in Congress to be able to implement his measures. Consequently, the most likely outcome is that the Trump administration will only carry out a moderated more expansionary fiscal policy since a large proportion of the Republican Party will not allow public debt to increase much further (it will end 2016 very close to 110% of GDP) while some specific protectionist measures will probably be implemented, such as anti-dumping measures aimed at specific countries and products.

Upward revision of GDP growth in 2017 and 2018. The new scenario assumes a fiscal impulse of approximately 1 pp between 2017 and 2018 with a moderate impact on growth and inflation. The uncertainty is expected to dissipate quite quickly and should not substantially affect the macroeconomic scenario. According to the new CaixaBank Research forecasts, in 2017 growth will be 2.3% (previously 2.1%) and in 2018 it should be 2.4% (previously 2.0%). This upward revision is in line with a somewhat more expansionary fiscal policy than assumed for the scenario with a H. Clinton presidency, and includes tax cuts for higher income brackets and companies together with more spending on infrastructures. On the other hand, in this scenario inflation will also accelerate slightly faster than predicted, reaching 2.3% in 2017 and 2.4% in 2018, a revision of +0.1 and +0.2 pps, respectively.

The new macroeconomic situation strengthens expectations of interest rate hikes by the Fed. Inflation gradual recovery towards levels closer to 2% and better growth prospects have dispelled doubts regarding the Fed’s future actions while the fact that the labour market trend is still positive and activity indicators have been favourable further reinforce this scenario. 161,000 jobs were created in October, putting the monthly average for the year to date at a healthy 181,000. The ISM business sentiment index for manufacturing reached 51.9 points, consolidating the strong upswing registered in September, while the ISM indicator for services also remained at a high level (54.8 points). These buoyant economic indicators along with good GDP growth data in Q3, bolster the accuracy of a growth rate forecasted at 1.6% in 2016.

Investors readjust their expectations regarding the speed with which the Fed will raise interest rates. Donald Trump’s victory and good economic indicators have prompted the market to increase the pace at which it expects the fed funds rate to increase: from no hike to one in 2017 (0.75%-1%) and from one to two hikes in 2018 (1.25%-1.5%). The price of US financial assets, particularly long-term sovereign bonds, therefore reflects a scenario for interest rates that is more similar to the CaixaBank Research one, which has remained unchanged: namely a second hike in December 2016, three additional hikes in 2017 (1.25%-1.5%) and three more in 2018 (2%-2.25%).

GDP growth was surprisingly high in Q3, advancing much more than expected, both by CaixaBank Research and by the consensus of analysts. In quarter-on-quarter terms it grew by a significant 0.5% while in year-on-year terms growth was 0.8%. However, this pleasant surprise has been offset to some extent by the fact that GDP’s composition was not so encouraging: the acceleration was due to a solid contribution made by exports but this contrasted with weak growth in private consumption and the modest progress of capital goods investment. After this good data in Q3, CaixaBank Research forecasts have been revised slightly upwards, both for 2016 (from 0.6% to 0.7%) and for 2017 (from 1.0% to 1.1%) but the benchmark scenario, in the medium term, remains unchanged. On the other hand inflation is still depressed in Japan, making it more difficult to achieve the monetary authority’s target of 2%. The headline CPI grew in October by 0.1% while the benchmark CPI for the Bank of Japan (without fresh foods) fell for the eighth consecutive month (–0.4% year-on-year).

Unease in Mexico due to D. Trump’s victory. The Republican candidate’s victory represents a shock of uncertainty in the short term and potential moderate effects in the medium term, prompting a revision of CaixaBank Research benchmark scenario. Although no extreme change is expected to NAFTA or to migratory relations between Mexico and the US, it is true the countries’ political relations have probably been damaged (financial turmoil is likely, particularly related to the exchange rate, and the peso’s strong devaluation after Trump’s victory illustrates this risk). We have therefore made a moderate downward adjustment to our growth forecasts of –0.1 pps in 2016 (from 2.2% to 2.1%) and of –0.5 pps in 2017 and 2018 (from 2.5% to 2.0% in 2017 and from 3.0% to 2.5% in 2018). We also expect that the Bank of Mexico will be more aggressive with its interest rate hikes in order to keep inflation under control.

Good performance of the economic indicators for the emerging countries as a whole. The predicted growth for the rest of the emerging countries remains unchanged as business indicators continue to show an acceleration in their growth rate, in line with CaixaBank Research scenario. It is worth noting the aggregate economic growth index compiled by the IIF, which points to growth of around 4.5%, clearly above the 3.5% posted at the beginning of the year.

China’s economy is stabilising but doubts remain regarding its willingness to reform. Economic indicators in October confirm that China’s economy is stabilising and the foreign sector was the only element still showing signs of weakness (see the Focus «Slowdown in world trade and investment» in this Monthly Report). However, beyond this short-term perspective there are still important sources of risk. In particular, November’s surprising dismissal of the country’s Finance Minister and defender of structural reforms, Lou Jiwei, seems to indicate that the Chinese government prioritises short-term growth over reforms. This is particularly worrying because, in the last few years, Chinese growth has gone hand in hand with increasing corporate debt, which is now at a level difficult to sustain, as well as strong pressure on the real estate sector. These elements illustrate the need to carry out far-reaching structural reforms to ensure growth is balanced and can be sustained over the long term.

Brazil, India and Russia: three countries that epitomise different emerging dilemmas. In Brazil, GDP suffered a considerable decline in Q3 with a fall of –2.9% (–3.6% in the second half of the year), affected by a sharp drop in investment. This figure confirms that it is still complicated for the country to exit its recession. For its part, India’s economy grew by a significant 7.3% (7.1% in the previous quarter) thanks to dynamic consumption, which offset a fall in investment. Lastly, the end of economic weakness is starting to be glimpsed in Russia: in 2016 Q3 GDP fell by 0.4% year-on-year (–0.6% in Q2). This figure is slightly better than expected and confirms that the country is slowly exiting its recession. The outlook for 2017 is promising as the economy is expected to return to positive growth (1.3% for the year as a whole).

Commodities: no change in the scenario for oil after the OPEC agreement. In response to the agreement reached on 30 November that limits the daily production of crude oil to 32.5 million barrels, the price of Brent quality oil went up more than 8% and reached 50 dollars per barrel. The price is expected to continue rising gradually over the coming months, although volatility is also likely to remain high (see the article «Oil prices will remain highly volatile» in this Monthly Report). 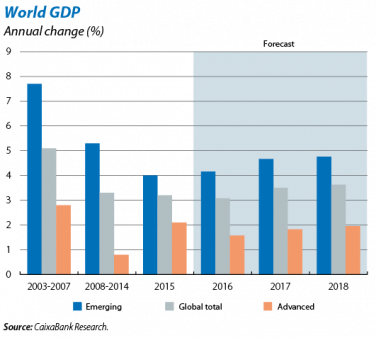 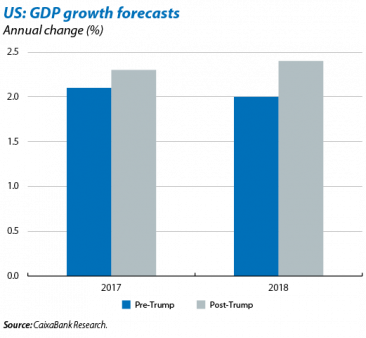