Expansion continues in the US while China holds firm

While the advanced countries continue in the expansionary zone, Brazil is still a source of concern among the emerging economies. Purchasing manager indices (PMI), for services for the advanced economies and for manufacturing for the emerging economies, show the dichotomy between these two blocs. The US services index rose to 59.1 points, a level that coincides with GDP growth of around 4.5%, while Brazil's index continued to fall and is now significantly below the threshold of 50 points. Meanwhile China's index remained stable close to 50.

China's mixed activity figures help to temporarily appease the alarmist voices. The slowdown was noticed in industry but consumption remained solid. In October, industrial production grew by a moderate 5.6% year-on-year, 0.1 pps below the growth figure for September, while retail sales came as a positive surprise posting year-on-year growth of 11.0%. The real estate sector also continued its improvement started in 2015 Q1. In particular, house prices rose again in October according to the index produced by the Economist Intelligence Unit. For its part October's general inflation stood 0.3 pps below the previous month's figure (at 1.3%), although this moderation was largely due to decreases in food prices, which represent a very significant part of China's basket of goods. Given this situation the government continues to support the economy. In November the country's central bank announced a cut in the interest rates on loans granted via its permanent credit facility.

The renminbi becomes part of the IMF's special drawing rights (SDR). On 30 November the IMF decided to include the Chinese currency in its SDR basket, a measure which will become effective as from October 2016. This decision has been interpreted as recognition for the monetary and financial market reforms carried out by the Asian giant, as well as evidence that the country intends to continue with its liberalisation process.

India continues to make solid progress. India's GDP speeded up to 7.4% year-on-year in 2015 Q3, 0.4 pps higher than the previous quarter's growth and slightly above our forecasts. Of note in the breakdown by component for demand are the good investment figures while, for supply, this acceleration has been strongly supported by the improvement in manufacturing. The agricultural sector, however, has continued to post tenuous advances given the weak monsoon. Our main scenario predicts 7.1% growth for 2015 (tax year) and 7.2% for 2016.

Latin America, Mexico and Chile are resilient, unlike Brazil. In 2015 Q3 Mexico grew by 2.6% year-on-year, 0.3 pps above its growth figure for Q2. Although the details by component have yet to be published, indicators point to this acceleration being due to the push provided by domestic demand which is recovering from its temporary glitch in Q2. Chile seems to be in a similar situation, speeding up to 2.2% year-on-year in Q3 (1.9% in Q2) thanks to a recovery in investment and public consumption. Both countries have therefore confirmed their capacity, based on good domestic performance, to overcome the current difficult period for exports, affected by falling oil prices in the case of Mexico and copper prices for Chile. Brazil still fails to show any sign of improving, however. Indicators for Q3 suggest that its recession did not diminish in this period and that most of the adjustment is taking place in domestic demand. Moreover inflation, far from contained, accelerated up to 9.9% in October, higher than expected. The relative stability of the Brazilian real since early October is the only good news offered by the country's financial and economic situation. We have therefore maintained our forecasts of a fall in GDP of –2.3% in 2015 and –0.6% in 2016, with high downside risks.

Russia's recession appears to be stabilising. The preliminary estimate for GDP in 2015 Q3 shows a fall of 4.1% year-on-year, less than the drop in Q2 (4.6%). In this recessionary environment, inflation (15.5% in October) is moving according to expectations although it is still high. Our main scenario predicts a fall in GDP of –3.7% in 2015 and –0.2% in 2016. Nonetheless the country's geopolitical problems, which have merely increased after its aviation incident with Turkey, represent significant downside risks to our forecasts.

The US continues to post significant growth. According to the second estimate for GDP produced by the Bureau of Economic Analysis, the US economy grew by 0.5% quarter-on-quarter in Q3, which is an improvement on the initial estimate (0.4%). GDP grew by a considerable 2.2% in year-on-year terms. This upward revision is mainly due to the inventories component whose negative contribution to quarter-on-quarter growth eased (from –0.4 pps initially to –0.1 pps). Private consumption saw solid growth (0.8% quarter-on-quarter) and non-residential investment also advanced, although its progress was more contained (0.6% quarter-on-quarter). Given this situation, we have kept our growth forecasts at 2.5% annually, both for 2015 and 2016, a rate which would be slightly above the country's potential growth figure (between 2.1% and 2.3%).

Consumption and investment will be the key components of the US expansion. Our main scenario predicts an improvement in non-residential investment after several quarters of weak performance, and also the continuation of solid residential investment. The Case-Shiller index for house prices also shows solid growth (5.5% year-on-year in September). Moreover, consumption will continue to benefit from a healthy job creation rate, which once again provided a positive surprise in October: 270,000 jobs were created, confirming that the slump seen in August and September was just a lull. Unemployment fell marginally to 5.0% and wages rose by a notable 2.5% year-on-year.

These data support the announcement of interest rate hikes this December, so now the dilemma focuses on the speed at which the Fed will raise interest rates over the coming months (see the Focus «A federal funds rate hike: this time it is different» in this Monthly Report). The good figures posted for the labour market and inflation in October make it more likely that Fed will start to raise interest rates in December. General inflation stood at 0.2%, 0.2 pps above September's figure, while core inflation remained at a healthy 1.9%. The CPI also grew by 0.2% in month-on-month terms with particularly strong growth in the energy component of 0.3% (compared with the 4.7% drop the previous month).

Japan enters a technical recession. Japan's GDP fell by 0.2% quarter-on-quarter in 2015 Q3 after falling by the same amount the previous quarter. This places Japan in recession as it has seen two consecutive quarters with negative quarter-on-quarter growth. In year-on-year terms, GDP grew by 1.1%. By demand component, stocks and investment were the weakest. In particular, inventory changes subtracted 0.5 pps from quarter-on-quarter growth and production investment 0.2 pps. On the positive side private consumption picked up with growth of 0.5% quarter-on-quarter (and a contribution of 0.3 pps) while the foreign sector also contributed positively after three quarters of deducting from growth. Nonetheless, given the disappointing GDP growth for Q3, we have revised downwards our forecast for the whole of 2015 (from 0.9% to 0.6%) and for 2016 (from 1.1% to 1.0%). Given this recessionary situation, a new package of fiscal stimuli will probably be announced and the monetary stimuli provided by the Bank of Japan might also be stepped up, although we have doubts regarding the effectiveness of such actions. The Asian country's policies should focus on the third pillar of Abenomics, namely reforms of a structural nature which, among other elements, should tackle productivity in agriculture, the tax burden for companies and encourage more women to enter the labour market.

Japan's inflation is still in negative terrain. Given this weak situation, the CPI without food but with energy (the Bank of Japan's benchmark) fell in October by 0.1% year-on-year (equalling the drop in September) while core inflation (without foods or energy) stood 0.1 pps below the previous month's figure (+0.7%). Weak consumption, which shrank again in October, suggests that prices will not pick up until well into 2016. 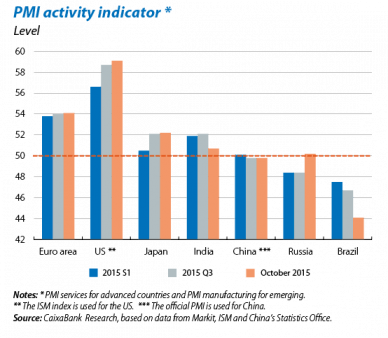 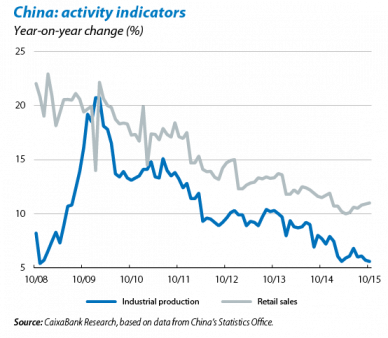 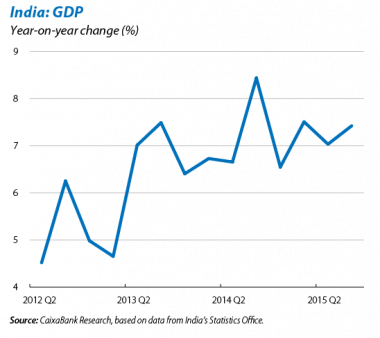 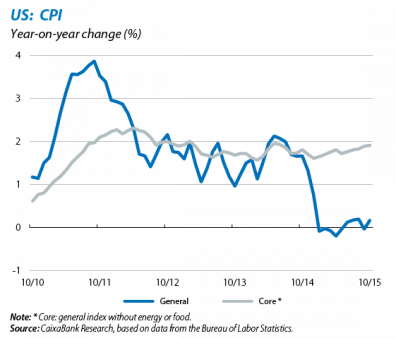 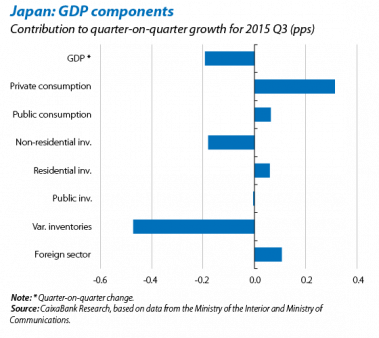