One of the key macroeconomic variables used to determine an economy's external vulnerability is its net international investment position (NIIP). An economy's capital inflows and outflows, contained in the financial accounts of its balance of payments, largely determine the change in the NIIP. However, changes in the valuation of assets and liabilities, reflecting variations in their market price in local currency and the exchange rate effect, among others,1 can also play an important role. This Focus analyses the impact of valuation effects on the evolution of the spanish NIIP.

The NIIP deteriorated significantly during the years prior to the crisis, going from a debt position of 31.2% of GDP in 2000 to 91.5% in 2012, one of the highest in the world. This deterioration was particularly due to the trend in the current account balance whose deficit steadily increased, reaching 9.6% of GDP in 2007. However, almost one third of the deterioration in the NIIP can be explained by valuation effects (see the first graph).2

This valuation effect has not helped in recent years either. Although the current account balance has been in surplus since 2013, it is noticeable that the debt position has not shown any sign of improvement up to 2015 Q2. This must be entirely due to valuation effects as cumulative financial transactions over this period would have reduced the debt position from 90.0% in 2012 to 83.3% of GDP in 2015 Q2, instead of the actual figure of 92.6% (see the second graph). If we analyse the changes in the value of assets and liabilities by instrument we can see a notable increase in the value of liabilities, specifically portfolio investment, and a slight decrease in the value of assets held by Spaniards abroad. Given that more than 70% of the liabilities from portfolio investment are debt instruments, mostly public, this change in value can be explained by lower interest rates and their impact on the price of bonds. The ECB's accommodative monetary policy has particularly reduced financing costs for the public and private sectors in Spain so that portfolios of Spanish assets in foreign hands have been revalued, especially bonds, which impairs Spain's NIIP. Moreover the gains seen in the Spanish stock market over this period have also helped to push up the value of shares and investment funds held by foreign investors.

The bulk of the evidence available suggests that interest rates will remain more or less at the same level over the coming year so no great changes are expected in the valuation of Spanish assets held by foreigners. However, we should see an improvement in the valuation of foreign assets held by Spaniards thanks to the global economic recovery. With a view to 2017, the contribution made by the valuation effect to the reduction in the NIIP will be greater. According to our forecasts, the ECB will start to raise interest rates by the end of that year. Therefore, as we approach this date, the medium and long-term interest rates for assets will gradually increase so that bond portfolios will lose value, undoing the negative valuation effect observed over the last few years. In any case, it is important to remember that a sustained reduction in external vulnerability necessarily involves maintaining a current account surplus.

2. With the aim of quantifying the importance of valuation effects, our starting point is the NIIP in 2000 and, as from that year, we have accumulated the financial transactions to obtain the NIIP without valuation effects. 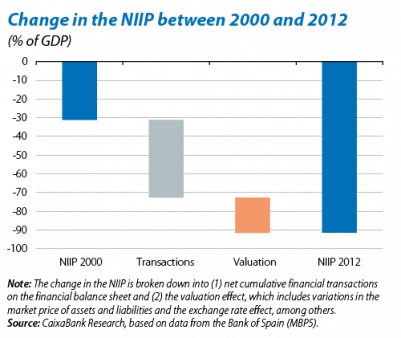 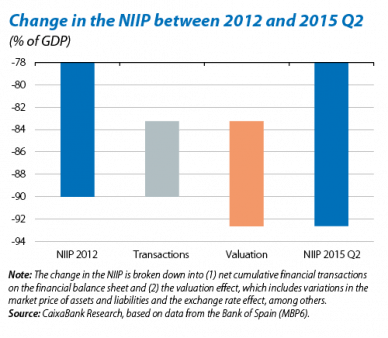