The Fed and cheap oil will continue to support world growth

Global growth is being supported by accommodative monetary policy and low oil prices. Although the Federal Reserve (Fed) made it clear at its June meeting that it will start to raise interest rates very soon, it also added an important element with regard to the rate at which it will toughen up its monetary policy. According to the Fed's communication, financial conditions will more than likely continue accommodative for a long time. This will provide a significant boost for world growth, especially for the emerging countries with a relatively unbalanced macroeconomic situation such as Turkey and South Africa, as well as those in recession such as Brazil and Russia. On the other hand, OPEC maintaining its oil production levels will also be particularly helpful for advanced economies and a large number of emerging countries as this will help to keep down the price of crude.

GDP saw a slight decline in 2015 Q1 according to the second revision produced by the Bureau of Economic Analysis. The flash figure published (0.1% quarter-on-quarter) posted an insignificant drop due to the foreign sector which hindered growth more than had been estimated in the first forecast, partly because of the dock strike in Q1. Year-on-year growth remained at 2.9% although the most notable aspect of this third estimate was the slight upward revision of private consumption. This strong consumption was confirmed by May's national accounts figures which posted a 0.6% month-on-month rise in personal consumption expenditure and a more solid improvement in household income than in April. Retail sales also looked strong in May and the Conference Board Consumer Confidence index shows that perception is also positive at present, close to the levels of 2006.

The bad figure from Q1 reflects temporary and methodological factors. The Fed's latest analyses conclude that the Bureau of Economic Analysis tends to underestimate growth in the early quarters (see the Focus «US GDP in Q1: better than it looks»). Other negative contributions to growth were made by the aforementioned strike and exceptionally harsh weather at the beginning of the year, whose consequences were felt by components such as construction and investment in infrastructures, the latter in particular falling by 5.1% quarter-on-quarter, its worst figure since 2010.

Recent business indicators support the hypothesis that construction has improved in Q2. The recovery in the construction sector has been confirmed, after the drop off in activity during the first few months of the year because of the bad weather. Generous expenditure on construction in April, especially in the industrial sector, was the expected reaction after a lethargic Q1. Similarly, the number of housing starts in May was 15.1% higher than the figure for February, in spite of falling compared with April. Business sentiment indices (ISM) are also still in the expansionary zone. The ISM for manufacturing, which in the last few months had suffered from the drop in oil and coal investment, added its second consecutive rise in May and stood at 52.8 points, a figure that corresponds with growth in GDP close to 3%. The ISM for services dipped slightly in May but its current level of 55.7 points coincides with economic growth above 3%.

Employment looks strong again. 280,000 net jobs were created in May, a higher figure than expected and above 200,000, indicative of a strong market. However, a rise in the participation rate meant that the unemployment rate increased by 0.1 pps to 5.5% of the labour force. The broad unemployment rate (U6), which includes the under-employed (people working part-time for economic reasons but who would like to work full-time) remained at 10.8% after several months of decline. Wages rose by a still moderate 2.3% year-on-year in May. Nonetheless, vacancies outstripped new employment contracts, which are growing at a considerable rate and could represent the start of a more consistent recovery in wages.

Core inflation is slowing down. In May the CPI rose by 0.4% compared with the previous month and by 0.0% year-on-year, still feeling the base effect of the fall in oil prices. More relevant is the fact that core inflation, which excludes food and energy prices, is slowing up, with a month-on-month increase of 0.1%, its lowest for the year to date (1.7% year-on-year, 0.1 pps less than in April). This slowdown in core inflation without owners' equivalent rent, which rose by 0.9% year-on-year, and May's deflator of core personal consumption expenditures (the price index used by the Fed as a benchmark), which rose by 1.2% year-on-year, also indicates moderate inflation. In spite of this, at its meeting on 17 June the Fed repeated its intention to carry out two hikes in the reference interest rate before the end of January. The rate of hikes will, however, be slower than had been announced.

2015 Q1 GDP is revised up. The Japanese economy grew by 0.9% quarter-on-quarter in 2015 Q1, clearly above the previously announced figure of 0.6%. The year-on-year change posted a decline of 1.0% (compared with –1.4% previously). Almost all the revision, in absolute terms, is due to the improvement in capital goods investment which went from growing 0.4% to 2.7% quarter-on-quarter. Although a good figure, the adverse inventory cycle, the volatile investor component and particularly weak private consumption stop us from transferring all this rise to our corresponding forecast for 2015, which we have raised from 0.8% to 1.0%.

Private consumption still needs to improve. The success of Shinzo Abe's expansionary policies, known as Abenomics, which started at the beginning of 2013 to rescue Japan from its deflationary cycle and achieve higher growth based on private consumption is still not assured. These measures included fiscal expansion, unprecedentedly accommodative monetary policy and pro-growth structural reforms that have yet to be specified. Two and a half years later, the pattern of growth has not changed: exports and imports are the components with most growth (the former boosted by the yen's depreciation and the recovery of the global economy and the latter by reconstruction efforts after Fukushima and energy purchases) and private consumption has hardly altered.

Prices rose in May somewhat more than expected, in spite of the energy component. The general CPI grew by 0.5% year-on-year and the CPI without food but with energy (the benchmark forthe Bank of Japan) rose by 0.1% year-on-year, above April's figure of 0.0%. Nonetheless, in the short term energy prices will continue to push the index down.

China's evolving towards a more moderate and sustainable growth model. In its report on the Chinese economy, the International Monetary Fund (IMF) states that the country is immersed in an arduous but necessary transition towards a model of more solid and higher quality growth. The slowdown in the growth rate is perceived as a by-product of this model change. The institution acknowledges the government's efforts to ease vulnerabilities such as debt and the real estate sector, among others. Lastly, as part of the far-reaching reforms required, it says essential changes comprise a «more market-oriented» policy in the financial sector and balancing the playing field for public and private firms.

The Chinese central bank continues to support the economy. Within this context of a changing model and more moderate growth advances, the central bank has once again cut interest rates (for the fourth time since November) by 25 bps, down to 4.85%. Along the same lines, it also reduced the cash reserve ratio.

India grew by 7.5% year-on-year in 2015 Q1. Although this is positive, growth in 2014 Q4 was revised slightly downwards (from 7.5% to 6.6%), altering somewhat the good figure for the start of the year. Given this situation and also the moderation in prices, India's central bank once again cut the interest rate by 25 bps, down to 7.25%. On the other hand, Brazil central bank was forced to raise the reference rate due to high inflation, all within an environment of negative growth.

Political uncertainty in Turkey. The legislative elections of 7 June resulted in victory for the Islamist Party led by Erdogan although this time it did not achieve an absolute majority. Consequently, the proposed constitutional reform has been avoided, which would have shifted Turkey towards a strong presidential state, but it also complicates the country's governability. The stock market and the lira reacted to the outcome of the elections with strong losses. However, financial markets rallied after the initial surprise. This change was also due to the good GDP figures for 2015 Q1, whose growth (2.3% year-on-year) was higher than expected. 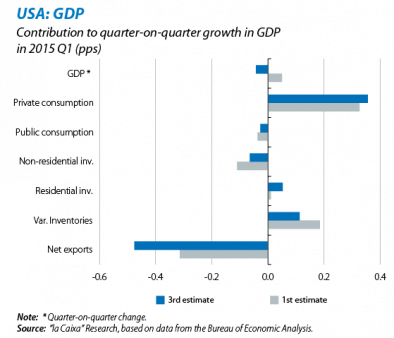 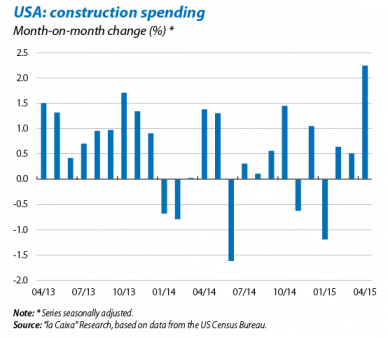 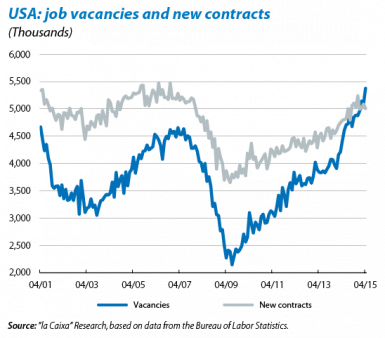 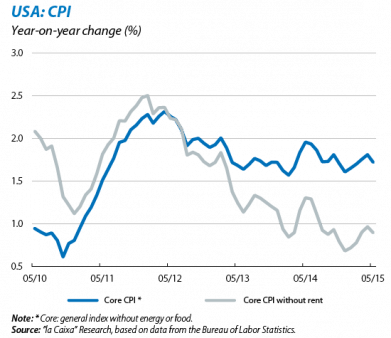 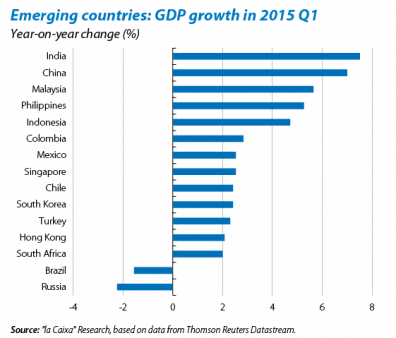