Moderate growth that is taking its time to build up steam

The euro area's economic expansion is continuing this year. The European Commission predicts that GDP growth in the euro area will be 1.7% in 2016, 0.1 pps less than the forecast given last autumn due to some headwinds (the slowdown in the emerging economies and recent financial turbulence) that are blowing somewhat more strongly than three months ago. The pace of growth for most of the region's economies is accelerating gradually and our scenario of forecasts predicts a moderate recovery that will build up speed throughout the year, albeit a little more slowly than we had initially expected. Growth is being sustained by solid domestic demand, especially private consumption and to a lesser extent public consumption and investment. The contribution made by foreign demand will be limited in scope due to the slowdown in world trade. The intensity of the tailwinds that supported growth in 2015 will change: low oil prices will continue to be a boost for a few months (although they will then gradually rise) and the ECB's accommodative monetary policy will intensify, keeping interest rates low and the euro's real exchange rate weaker (than without the accommodative monetary policy). However, our scenario could be affected by some headwinds that are blowing more strongly than expected: a greater slowdown in the emerging economies, the continuation of financial volatility, the UK's exit from the EU and geopolitical risks.

The euro area's GDP grew by 0.3% quarter-on-quarter in 2015 Q4 (1.5% year-on-year), the same rate as in Q3. This figure places total growth for the year at 1.5%, representing an increase on 2014 (0.9%). Nonetheless the recovery is taking place at different speeds depending on the country and is somewhat slower than expected. Spain is still in the lead with 0.8% growth quarter-on-quarter in Q4 while Germany maintained a moderate but solid rate of 0.3% in Q3. On the other hand France and Italy reduced their growth rates by 0.1 pps, to 0.2% and 0.1% quarter-on-quarter respectively. Although the breakdown of GDP by demand component has yet to be published, the data available point to domestic demand being the main support for growth in the euro area. The economy has benefitted from some temporary factors that have offset, for the time being, the slowdown in the emerging economies and the increase in financial turbulence.

Emerging Europe accelerates its recovery. In Q4 the activity rate speeded up throughout the region. Of note was the high GDP growth recorded by Poland, Romania, Slovakia and Hungary, whose percentage change quarter-on-quarter reached and in some cases even exceeded 1% (the year-on-year change was 3.5%-4%). Lacking details by component, available indicators suggest that most of these economies are being helped simultaneously by the positive contribution of foreign demand (reflecting the good tone of their main market, the euro area) and more vigorous domestic demand. The immediate outlook is for these countries to record a notable rate of expansion in 2016, albeit gently slowing down compared with 2015.

The pace of activity growth does not seem to have increased in 2016 Q1. Business indicators available for the month of February point to growth in the euro area not speeding up. The economic sentiment index fell to 103.8 points, above its historical average (100). The composite PMI fell to 52.7 points, its lowest figure since January 2015 although it is still clearly within the expansionary zone (above 50 points). By country, the composite PMI fell in Germany to 53.8 points but also still remained comfortably in the zone of expansion. On the other hand, in France the index fell to 49.8, a marginally recessionary level. These drops show how the turbulence observed in financial markets is affecting economic and business sentiment and, although we do not expect this to lead to a slowdown in activity in the euro area, growth may take longer to gain traction.

Consumption grows but does not accelerate. Demand indicators show a certain slowdown between the end of 2015 and the start of 2016. Retail sales rose by 1.4% year-on-year in December, a rate higher than their historical average but slightly below the strong growth recorded in the rest of 2015. On the other hand consumer confidence in the euro area fell in February to –8.8 points (–6.3 in January), below the figures observed since December 2014. This reduction in confidence reflects increased uncertainty as a consequence of the strong financial volatility recently but we expect this downward trend to be temporary. In fact, the euro area's labour market continues to recover well. Unemployment fell to 10.4% in December 2015 and we expect it to continue improving this year and support the improvement in private consumption.

The current account surplus continues to improve. In spite of the gradual increase in domestic demand, the low oil prices, which have reduced the euro area's energy deficit, and improved price competitiveness both helped to boost the current account surplus in 2015. This reached a peak of 3.2% of GDP in December (cumulative over 12 months), supported by the large correction in the deficits of numerous peripheral countries (Spain is a clear example) and by the continued substantial surplus in Germany (8.9% of GDP in December). From the point of view of investment and savings, a large rise in the surplus indicates that increased savings have not been invested in the euro area and, if the situation continues for some time, this imbalance might have an effect on the euro area's growth potential.

The United Kingdom's potential exit from the EU adds uncertainty to the economic environment. The UK has reached an agreement with the European Council regarding the terms of its EU membership, which will be put to a referendum on 23 June. The agreement covers four major areas: sovereignty, competitiveness, economic governance and immigration. The latter has been the most controversial, as it includes an «emergency brake» to social benefits related to employment for immigrants from the EU, treating them differently to national workers. Beyond the small print, should it be approved the United Kingdom will no longer be committed to greater integration within the EU, setting a precedent with negative consequences for political and economic integration should other countries also claim exceptional circumstances. However, the clarification of its role may also give free rein to those countries hoping to achieve greater political and economic integration within the euro area. So far the polls have not provided a clear outcome for the referendum as many people are undecided. Whatever the result, the possibility of Brexit has increased uncertainty, leading to the pound depreciating sharply in the last few weeks. This depreciation is also due to the possible delay, until the beginning of 2017, of interest rate hikes by the Bank of England given the context of greater uncertainty and low inflation.

The refugee crisis is an important challenge for the EU, beyond its humanitarian aspect. The inability to reach an agreement on how to handle the crisis is leading each country to take unilateral decisions to the detriment of their neighbours. Six countries have temporarily imposed border controls within the Schengen area, a measure that could hinder the EU's economic growth if it continues for some time. According to France Stratégie, a permanent return to border controls would be the equivalent of introducing a commercial duty on trade which would reduce commercial relations between Schengen countries. Within such a climate of mutual mistrust, it will not only be difficult to resolve the management of the refugee crisis but also to advance in constructing Europe in general. Moreover, other risks might appear, both geopolitical and those particular to each country, which could end up having a negative impact on growth by limiting the EU's ability to respond as a single entity.

The sources of risk increase in Portugal. Portugal's growth prospects have weakened recently: the consensus of analysts' GDP forecast for 2016 has gone from 1.8% to 1.5% in less than four months. This deterioration is the consequence of worse activity figures recorded in the second half of 2015 with domestic demand losing its vigour, and also of doubts regarding the government's parliamentary solidity and its capacity to adopt the right economic policy, which have already had an effect. Particularly of concern is the uncertain trend in the budget resulting from a lack of credibility in the scenario forecast, leading to the European Commission demanding additional adjustments. 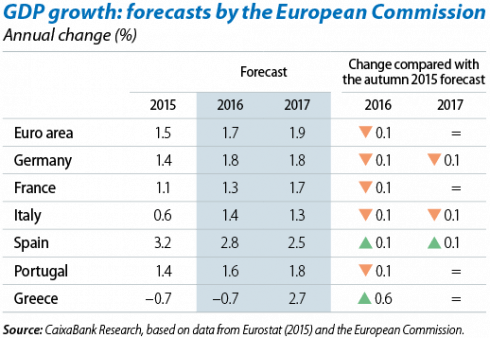 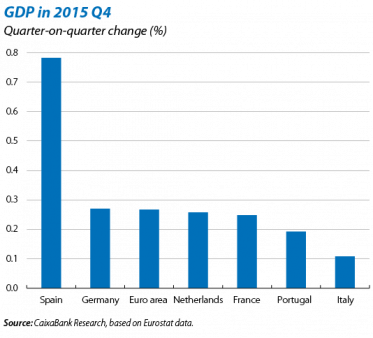 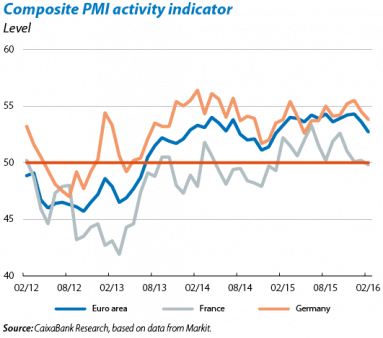