Since 2011, the pension system has been the focus of a large portion of the government's reforming efforts. The aim is clear:
to ensure it is sustainable in the long term. The path is gruelling. To guarantee the sustainability of the pension system it is vital to increase the revenue and/or reduce the expenditure of Social Security while minimising the impact on its beneficiaries and contributors. Not an easy task by any means but an unavoidable one. Spain's ageing population will put Social Security expenditure under steadily increasing pressure. Moreover, the strong impact of the economic crisis on the labour market has drastically reduced revenue. All this has accelerated the government's agenda for pension reform. Will the actions undertaken be enough to ensure that Social Security revenue and expenditure are balanced in the long term?

Let's start by looking at Social Security revenue. The deterioration in the labour market over the last few years has led to a sharp drop in employment and to wage containment, reducing Social Security contributions by almost 7 billion euros between 2008 and 2012. However, expenditure on contributory pensions increased by 18.8 billion euros in the same period. Three factors lie behind this increase. Firstly, the rise in the number of pensioners who, as shown by the graph on the left, account for around 20% of the increase in pension expenditure between 2000 and 2010. Secondly, and with the greatest impact on the growth in pension expenditure over the last decade, pension revaluation. Until 2010 pensions were updated at least by inflation, guaranteeing that pensioners would maintain their purchasing power, albeit at a high cost. Lastly, expenditure also depends on the trends in the average pension due to the substitution effect. In other words, the difference between the pension received by new pensioners and the one received by those leaving the Social Security register. In 2012, for example, not only did the number of new pensioners (308,400) vastly exceed the number of withdrawals (259,530) but the average pension for the former group was 354 euros higher than that for the latter. Although the drop in revenue is very likely to reverse once the economy reaches sustained levels of growth that allow jobs to be created, this will not be enough to correct the structural imbalance inherent in the pension system. According to projections by the European Commission in 2012, in the absence of reforms the ratio of Social Security contributors to the pensioner population will fall from 2.4 in 2010 to 1.3 in 2060 while pension expenditure will increase by 3.6 percentage points of GDP over the same period.(1) Such long-term projections have a high level of uncertainty. For example, another migratory wave such as the one experienced in the first decade of this century could substantially alter this scenario. However, it is vital to introduce far-reaching reforms that help to balance the Social Security accounts based on the scenario that, today, is deemed most probable.

An initial reform was carried out of the pension system in 2011, modifying this from different angles (see the enclosed table). Some of the measures taken reduce the growth rate for the number of pensioners by increasing the working life of employees, increasing the contributory period required to qualify for a full retirement pension or gradually raising the retirement age, from 65 in 2012 to 67 years in 2027. With the new law, the period used as the basis for calculation has also been extended from 15 to 25 years. Given that a person's salary usually grows over a large part of his or her working life, this extension will reduce new pensions by between 3% and 4% approximately, thereby affecting the substitution effect.

These initial changes represent a first step in bolstering the sustainability of the pension system but do not correct the long-term structural imbalance.(2) That is why, in line with the European Commission's recommendations, the government has presented a bill to introduce the sustainability factor as a core element of the pension system. This mechanism is made up of two instruments: the intergenerational equity factor (IEF) and the annual revaluation factor (ARF). The IEF takes life expectancy and therefore the ageing population into account in calculating pensions. Although the total amount of pension to be received may remain constant, the longer life expectancy means that the monthly payment received is less. According to INE projections, life expectancy at the age of 65 increases by 5% every ten years but, seeing as this measure will only affect new pensioners, its impact on Social Security expenditure will be noticed very gradually. The government estimates that savings on pension expenditure due to the introduction of this corrective factor will be, annually, 0.1% of GDP in 2030 and will increase to 0.6% of GDP by 2050.

The main novelty introduced by this bill is the revision of the revaluation rate for pensions via the ARF. As we have seen previously, this was the main factor behind the increase in pensions between 2000 and 2012. Specifically, revaluation increased pension expenditure by 45% in this period, a slightly smaller rise than the one that would have occurred had pensions been raised in line with inflation every year. According to the ARF system, the annual revaluation of all public pensions will depend on Social Security budgetary flows and the economic cycle so that, when these are not favourable, pressure on expenditure will decrease. The main aim is to equate growth in Social Security revenue to that in expenditure. To this end, the revaluation rate must coincide with the increase in net revenue from the growth rate in the number of pensions and the substitution effect. Moreover, a corrective element is added so that, when Social Security has a recurring deficit, growth in expenditure will be less than that in revenue, and vice versa. All this is mitigated both by the economic cycle and by the minimum level (0.25%) and maximum level (inflation +0.25%) between which the ARF can fluctuate, thereby avoiding excessively sharp variations in the revaluation rate.

According to the government's estimates, introducing
the ARF in 1997 would not have substantially modified the revaluation of pensions over the last few years. In fact, during that period, only 2011 and 2012 would have seen a revaluation lower than the increase in prices. This effect would have been almost entirely offset by the revaluation in pensions above inflation during the preceding years.

However, in the coming years the ARF will have significant impact. According to the government, the new revaluation measures will reduce expenditure on contributory pensions by almost 33 billion euros between 2014 and 2022 (compared with a scenario of an inflation-linked revaluation of 2.0%). The enclosed graph shows this effect: the introduction of the ARF helps to reduce the Social Security deficit (measured as a percentage of all Social Security expenditure) in the coming years. A scenario that contrasts with the increase in the deficit that would occur if pensions were revalued in line with the rate of inflation. To achieve this improvement in the Social Security deficit in an environment where the rise in revenue is expected to be very subdued and, moreover, the ratio of contributors to pensioners will continue to fall, it is likely that the ARF will place the revaluation at relatively moderate levels for several years. In short, there is no doubt that the pension reforms presented over the last two years are necessary to halt the deterioration in the Social Security accounts. Moreover, all the evidence suggests they have helped to take an important step forward toward long-term sustainability. 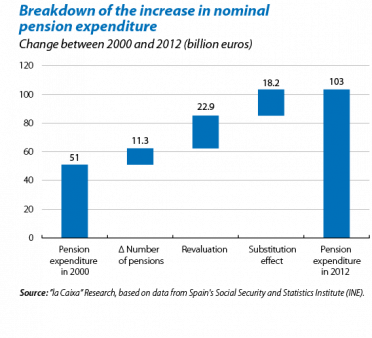 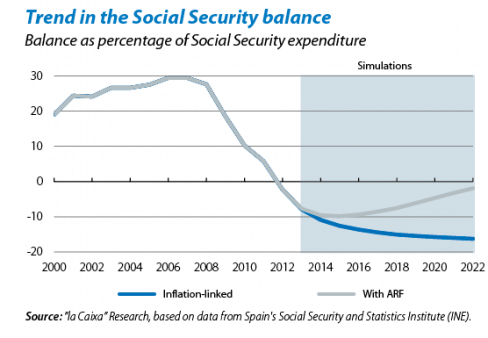