One of the main commitments undertaken by the Spanish authorities in the Memorandum of Understanding regarding conditions for financial sector policy, taken out last July, is the creation of an asset management company. This will receive the troubled assets from institutions receiving injections of public capital. Royal Decree-Law 24/2012, of 31 August, on the restructuring and resolution of credit institutions, created the regulatory framework to govern this company. The government has recently published a draft royal decree for public consultation that will implement this framework and set up the asset management company for bank restructuring (Sareb in Spanish). However, the essential aspects of the asset transfer process will not be determined until the end of November. With the caution imposed by these limitations on the information available, this box will carry out a preliminary review of the volume of assets that might be transferred to Sareb and the possible impact of its activity on Spain's property market.

The draft royal decree provides for the transfer to Sareb of, principally, foreclosed properties with a net book value higher than 100,000 euros, controlling shares in real estate firms and developer loans with a net book value higher than 250,000 euros, including credit that is currently up-to-date with its payments. Without including shares in real estate firms or the aforementioned lower limits applicable to foreclosed properties and developer loans, the volume of assets that could be transferred would be at least 94 billion euros from nationalized institutions (see the table below). This amount could rise to 153 billion euros if none of the institutions with capital requirements of more than 2% of their risk-weighted assets (RWA), according to the stress tests carried out by Oliver Wyman, manages to recapitalize without state aid. By asset type, around 27.7% of the transferred portfolio will correspond to real estate or land directly in the hands of Sareb to be sold on the market and the rest will be in the form of loans. Of these, approximately 30.5% will be related to completed housing and 21.2% to urban land (see the graph below).

The acquisition price for these assets will determine the discounts on the original valuation that could be offered by Sareb to place the properties on the market. The draft royal decree establishes that assets must be transferred based on their long-term economic value, determined by independent experts in the individual stress tests, although in no case can the transfer value be lower than any provisions demanded to date.(1) Oliver Wyman offers two possible valuations for bank assets depending on the macroeconomic scenario, although only for a timespan of two years. Taking these references as the long-term value of the assets is therefore somewhat conservative, as the effects of a medium-term economic recovery are not included. The average writedowns finally announced by the FROB are based on Oliver Wyman's base scenario with an additional discount of 11.4% to cover the costs and risks of the operation,(2) bringing them close to the adverse scenario (see the table below, left-hand panel). An average writedown was therefore established of 45.6% for developer loans and 63.1% for foreclosed properties, so that Sareb's balance sheet would total around 46.42 billion euros if only the nationalized institutions transfer their assets, and would reach 75.76 billion euros if all group 2-3 institutions with high capital requirements are included.

The right-hand panel of the table below details the maximum discounts on the original valuation that would allow Sareb not to incur losses under each scenario and that are the result of taking the average writedowns on foreclosed assets with the writedowns on properties that serve as collateral for the loans transferred to Sareb.(3) According to the valuations announced by the FROB, the average discount from peak levels would therefore be 72.7% in the case of land and 54.1% for completed constructions.

The price at which Sareb finally offers real estate assets will depend on how much time it has to sell each asset category. Although officially it will have 15 years, several factors could accelerate the pace of divestments depending on the asset type. Firstly, the company will have to cover its operating and financing costs every year, so the extent of these will be a decisive factor. As a reference, in the case of the Irish NAMA, the operating costs forecast for the whole life of the company totalled 5.4% of the assets at the time it was set up in 2010, while its financial costs are relatively moderate because 95% of its liabilities (state-backed senior debt) pay semi-annual interest equal to the Euribor 6-month rate. Secondly, the debt repayment schedule might also affect the sale strategy. For the Irish asset management company, such conditions have had a considerable effect as at least 25% of the debt must be repaid within four years after the company started up, and 80% after eight years. Lastly, Sareb will probably have to invest resources in developing the land and managing the building work underway.

To handle the pressure to sell imposed by these factors, Sareb could resort to earning revenue from the securitization of the company's assets, as well as from managing completed properties, including possibly renting them out, and also developer loans. The interest and payments made on healthy credit should also contribute notably to its cash flow. To this end, the company will have to establish a suitable system of incentives to ensure that the different counterparties involved (developers, institutions transferring assets, etc.) do their utmost to fulfil their commitments. In this respect, it might be useful to review debtors' business plans to verify their viability and design actions that ensure their debts are paid back in line with the established timetable for the project as a whole. In the case of Ireland, NAMA's involvement includes the design and approval of the criteria that must be met by sales made by its debtors.

Carrying out such tasks successfully would help Sareb to establish a timeframe to sell its properties that is compatible with the materialization of their real economic value, also generating sufficient volume of transfers to revive the property market. Beyond its contribution to the stability of the Spanish financial system, the establishment of a reasonable benchmark for real estate prices, in line with their fundamental determinants, would be another key accomplishment in contributing to a sustained economic recovery.

(2) In the case of Ireland, this additional discount was 10%. See European Commission Competition (2011), «The effects of temporary State aid rules adopted in the context of the financial and economy crisis», Commission Staff Working Paper.

(3) The discount on the value of the properties serving as collateral takes into account the fact that the loans related to these properties were granted for 68% of its original valuation on average.

This box was prepared by Sandra Jódar-Rosell 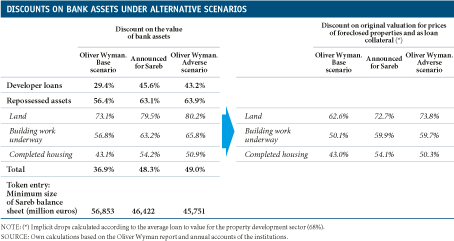