The Portuguese banking system faces the aftermath of the COVID-19 crisis with a more resilient position and greater room for manoeuvre in dealing with stress situations.

The Portuguese banking system faces the aftermath of the COVID-19 crisis with a more resilient position and greater room for manoeuvre in dealing with stress situations (see first table). There are several positive aspects which stand out: i) the solvency and liquidity indicators exceed EU average levels; ii) profitability ratios were improving up until the outbreak of the pandemic and interest margins have remained stable despite low interest rates; iii) although the level of nonperforming loans remains above the European average, in the years leading up to the pandemic it was improving, and iv) the coverage levels in the face of a potential impairment of these loans are higher than the European average. 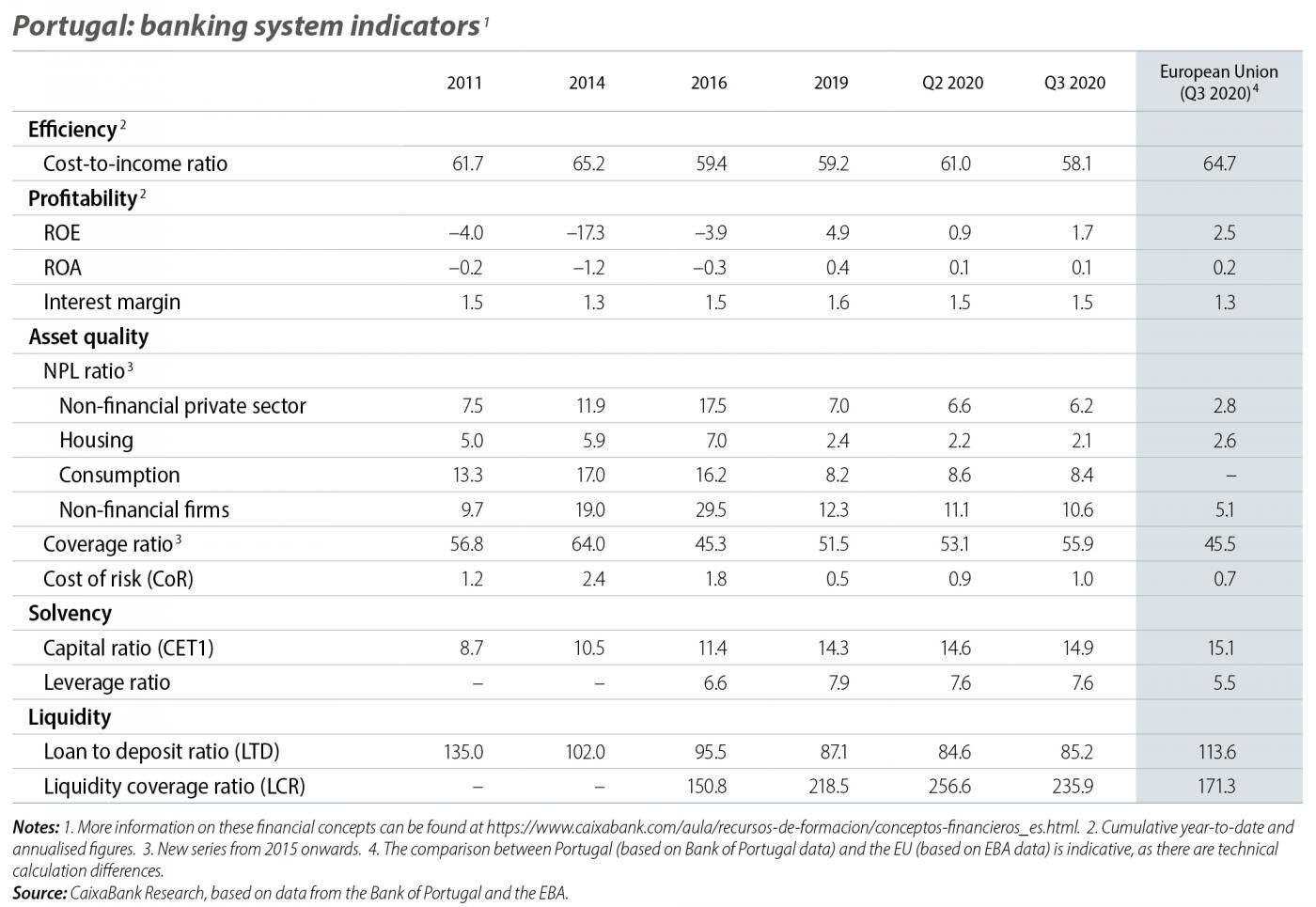 However, in the context of significant contractions in economic activity as a result of the COVID-19 crisis, containing credit risk will be a major challenge for the sector going forward, especially if the credit moratoria and guarantees expire before the economic recovery is on track.

The role of moratoria...

On the one hand, credit moratoria1 temporarily mitigate the liquidity tensions that can occur when a reduction in income occurs, while they also provide protection for creditors in the event of defaults. Under the credit moratoria approved in Portugal, up until September 2021 affected households and firms can forego paying their loan instalments,2 without this resulting in their credit being classified as nonperforming. Furthermore, the loan maturity date is deferred by the number of months for which the debtor benefits from the moratorium. This helps to contain default ratios, as it prevents debtors’ temporary liquidity difficulties from translating into solvency problems.

As shown in the second table, in September moratoria affected 17.3% of household credit and 32.0% of business credit. That is, the total amount of credit under moratoria amounted to 45 billion euros, or approximately 23% of the stock of private sector credit and GDP. In addition, the Bank of Portugal estimates that up until September 2021 the cumulative sum of instalments that will have gone unpaid as a result of moratoria will amount to €13 billion: €2 billion for households and €11 billion for companies. 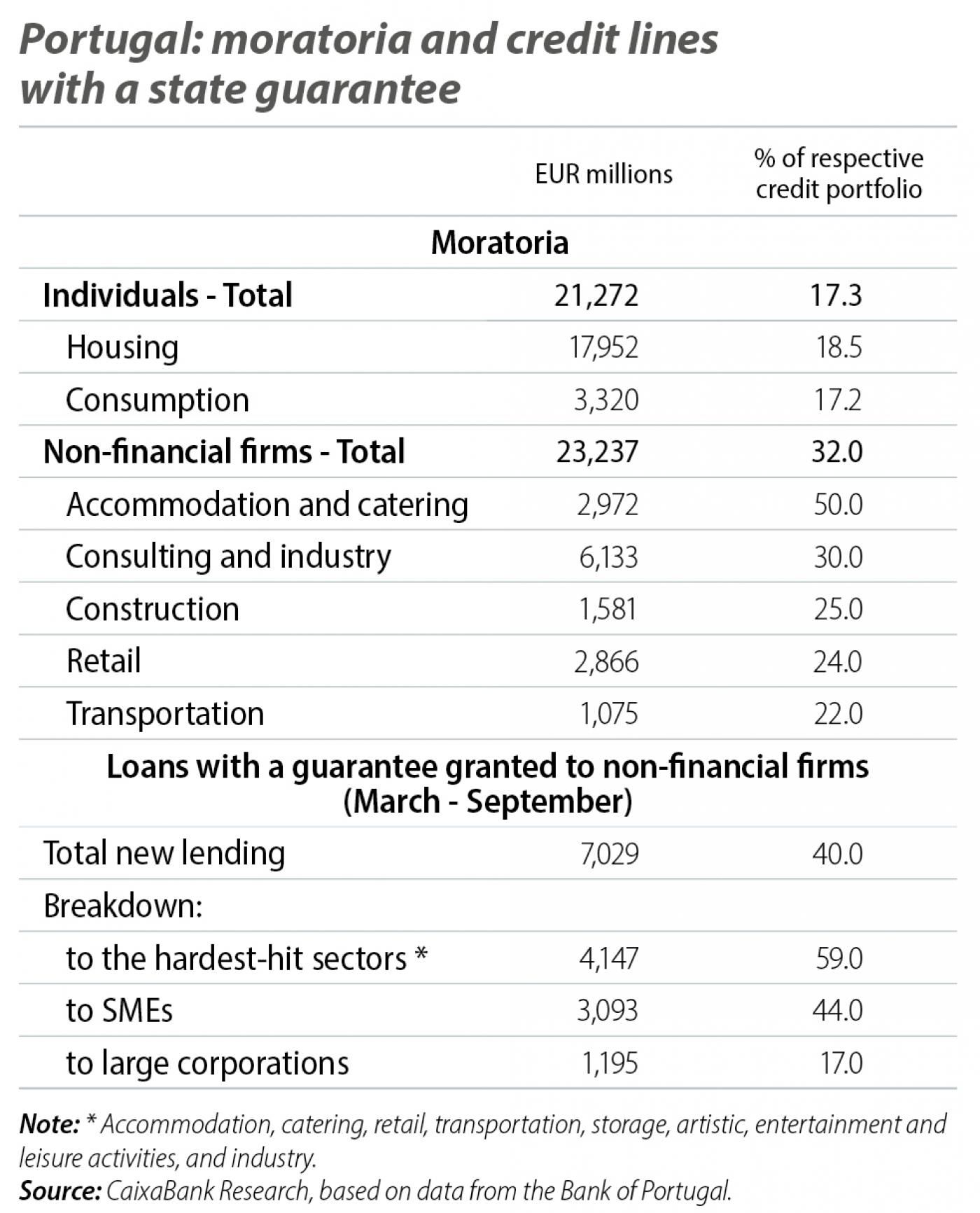 Indeed, Portugal has registered the third highest usage of moratoria in the euro area (22.2% of total credit according to data from the EBA up to June,3 significantly above the European average of 7.5%). This is explained by a combination of factors: i) a level of indebtedness which, despite the deleveraging process of recent years, is still relatively high (among households it stands at 66% of GDP in Portugal, compared to 60% in the euro area as a whole, while among firms it is 101.4% versus 115% for the euro area, according to Eurostat); ii) a low savings rate, and iii) especially for firms and self-employed workers, the fact that the tourism sector, which accounts for a large part of GDP, has been one of the hardest hit.

Housing credit moratoria are particularly prominent (around 40% of private sector credit is subject to moratoria and 84% of credit to individuals with a moratorium is housing credit). Nevertheless, there are factors that help to mitigate these figures. On the one hand, the default rate among housing credit has historically been very low, reflecting households’ strong commitment to honouring housing-related debts. It should also be noted that the rise in unemployment in 2021 is expected to be relatively moderate, so the increase in the default rate ought to be contained and should not tarnish the significant improvement achieved in the years leading up to the pandemic.4 On the other hand, among the loans which have benefited from moratoria, Portugal has registered one of the lowest percentages of increased credit risk in these loans (see last chart). 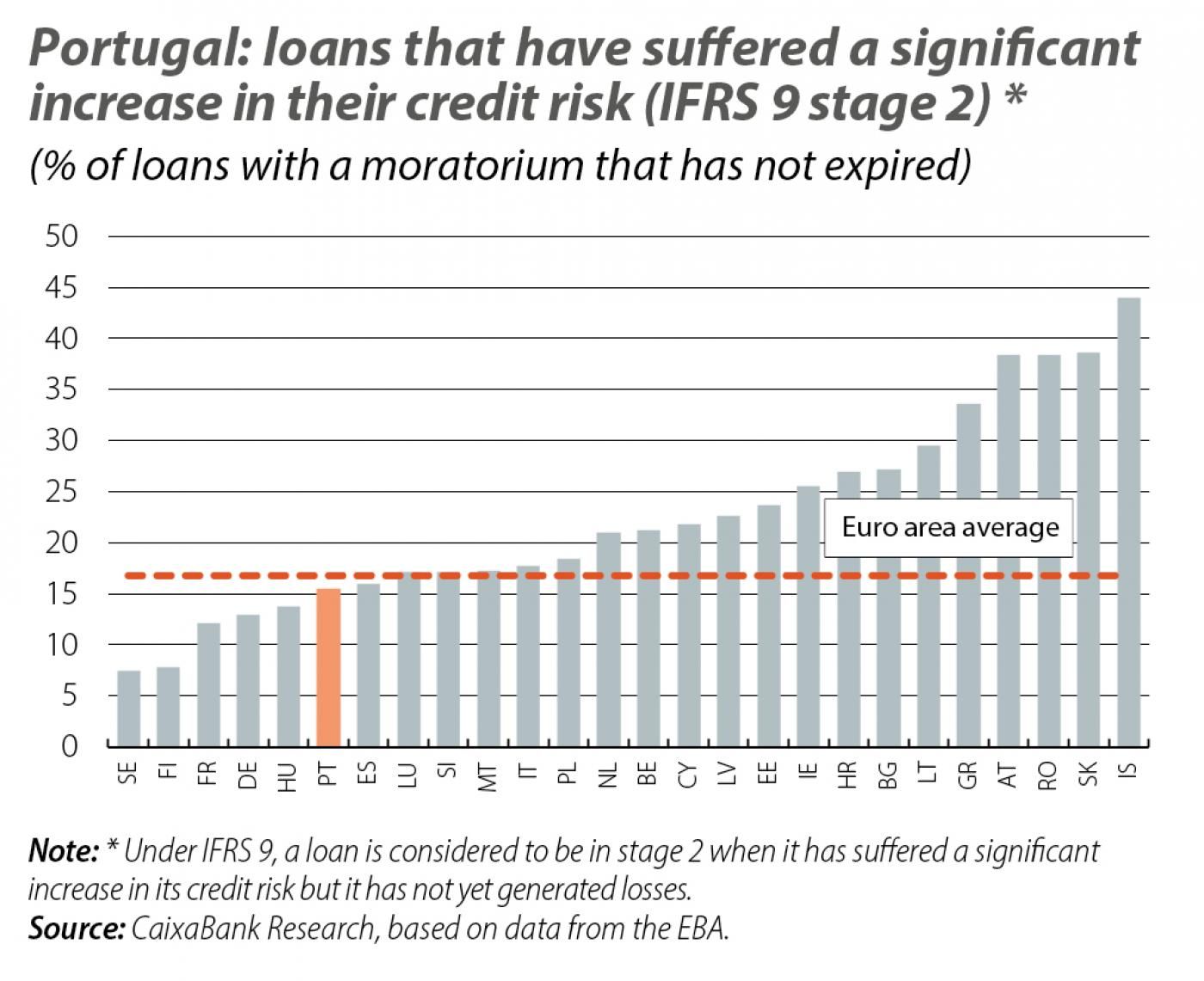 Another of the major tools introduced to cushion the blow of the COVID-19 crisis is the state-guaranteed credit lines.5 These aim to maintain the flow of loans to the real economy, at a time when credit risk in the demand for credit has increased due to the economic impact of the pandemic. They are generally intended for SMEs, micro-enterprises and self-employed workers who could have difficulties in obtaining financing. In Portugal, these secured credit lines accounted for around 40% of all loans granted to companies between March and September 2020 (€7 billion) and are largely concentrated in SMEs operating in the hardest hit sectors.6

Despite the risks associated with the granting of credit to companies in a weaker position, according to the Bank of Portugal the conditions under which these loans are granted help to ensure that their credit risk remains contained. These credit lines have an 18-month grace period. This means that the repayments will not begin until September this year, at which point economic activity is expected to be on the road to recovery. Moreover, the fact that these loans are mostly granted for terms of over five years reduces the potential for the borrowing firms to experience financial stress.7