The restructuring of periphery banks

During the last expansionary economic cycle, lending standards were loosened in the peripheral countries, bringing about strong growth in credit. In some cases, such as Ireland and Spain, this credit boom was concentrated in the construction industry whereas in countries such as Portugal and, to a lesser extent, Italy, bank financing was mainly used by companies in the rest of the sectors. In the case of Greece, banks were highly exposed to the public sector, whose debt grew very sharply, endangering its sustainability. In spite of these differences, in all cases the excesses committed during the pre-crisis years laid the foundations for the recession. One of the main consequences of the crisis for banks is that their assets are now of a much lower quality, affecting the profitability and solvency of the banking system. This Dossier article analyses the measures implemented to resolve such deficiencies in periphery banks.

When the financial crisis erupted, and after a period of uncertainty, the ECB decided to relax its monetary policy, providing an extremely accommodative environment and injecting a large amount of cheap liquidity throughout the euro area's banking system. Although this intervention was necessary to ensure banks could replace the wholesale funding which had disappeared when the crisis started, as the recession became entrenched and the economic situation worsened such measures did not manage to prevent the assets on bank balance sheets from deteriorating rapidly, jeopardising the solvency of many financial institutions. For this reason most peripheral countries (Portugal, Greece, Ireland and Spain) required financial aid from the rest of their European partners to recapitalise
the hardest hit banks. This assistance was accompanied in many cases by a programme to provide the public treasury with economic aid and was conditioned by the implementation of reforms and fiscal consolidation.

In addition to these emergency measures at a European level, urgent efforts were also made nationally to restore banks' balance sheets, vital to ensure the sector's weaknesses would not affect the rest of the economy. For those countries where non-performing loans (NPL) were concentrated in specific sectors, asset management companies were set up (AMC, also known as «bad banks») whose aim was to quickly and effectively cleanse bank balance sheets by purchasing such assets, with fixed haircuts and in exchange for government-backed bonds. Of particular note are the companies of Ireland (NAMA) and Spain (Sareb),1 both focusing on buying up credit from the real estate sector. The creation of these companies produced broad benefits. From the banks' point of view, it helped them to (i) concentrate their resources on managing their healthy business; (ii) secure liquidity quickly; and (iii) eliminate uncertainty regarding the quality of the assets remaining on their balance sheets.2 Other benefits of a more general nature were that AMCs could take advantage of the economies of scale resulting from managing a large volume of similar assets and, as far as possible, they acted as a catalyst for a market of NPL portfolios in the euro area.3

Measures of a more general nature were required for the other non-performing loans spread around the rest of the economy's sectors. Once again Spain is a case in point, making progress in incentivating corporate debt capitalisation (swapping debt for capital) by reinforcing the powers of creditors during refinancing and restructuring processes. Other countries modified their tax regimes to speed up the resolution of non-performing loans; such as Italy, which altered its tax system to allow provisions to be tax deductible in the year they were produced.

Although all these measures, both at a national and European level, provided immediate relief for the periphery banking sector, their main aim was to sterilise the environment and cure the symptoms of the disease (i.e. reduce non-performing loans). Additional effort was therefore required to treat the root cause of the problem.

Various reforms were implemented at a national level to correct the banking industry's structural deficiencies. At first, in countries such as Spain and Italy, a legal framework was developed to improve the corporate governance of banks. One clear example is the reform of the legal regime for savings banks in Spain, encouraging them to become banks, which has made it easier for them to obtain capital in the markets as well as improving their transparency and discipline. Italy also passed a Decree-Law to encourage its large cooperative banks (banche popolari) to become listed companies. This reform aims to modernise the governance of banks, improving their risk management mechanisms as well as promoting consolidation in the sector.

Other reforms of a structural nature were aimed at making bankruptcy and insolvency proceedings faster and more efficient.4 This not only speeds up the resolution of non-performing assets but also promotes private sector deleveraging at the same time as ensuring viable companies survive. All the peripheral countries apart from Greece have made progress in this area and particularly Spain, approving a «Second Opportunity» law for self-employed people and private individuals with a partial discharge of their debts when they have filed for bankruptcy, dependent on certain conditions.

The goal of all these structural measures is to promote sustainable business models for banks in the long term and ensure loans are granted in line with the needs of the private sector, as part of a larger banking union which, in the medium term, should eliminate financial fragmentation and break the damaging link between sovereign and credit risk. For this to be possible, powers will need to be transferred in the area of supervision (single supervisory mechanism) and in the management and resolution of future banking crises (single resolution mechanism). More progress also needs to be made towards a deposit insurance scheme, the third pillar of banking union, which guarantees equal conditions for the deposits of any financial institution irrespective of the country of origin.

The results of all the reforms implemented so far in the financial sector can be seen in the dynamics of bank credit in the different countries. The volume of bank loans in these countries is still falling due to private sector deleveraging but the rate has slowed down over the last few months and is now approaching positive terrain once more. For a more realistic view of the underlying dynamics of bank loans we must therefore analyse the trend in new operations. In this case, the number of loans granted to non-financial firms grew in August compared with the previous year in Spain, Italy and Ireland while new operations with households saw positive growth in Spain, Italy, Ireland and Portugal, although in the case of Ireland the loans granted to households to purchase housing have yet to recover.

In conclusion, those peripheral countries that have implemented far-reaching reforms in the banking sector now have recapitalised, efficient banks, improving their capacity to grant credit and support the region's economic recovery. Those that have yet to embark on this arduous reformist route, such as Greece, need to quickly follow the example of their more advanced neighbours while all countries should continue to work on reducing bad debt to definitively restore Europe's banking system back to health.

1. Italy is analysing the creation of an AMC for non-performing loans granted to companies. See the Focus «The challenges still facing Italy's banking system» in MR10/2015.

2. This also provides some relief regarding capital requirements by reducing risk-weighted assets.

3. Transactions to buy non-performing loan portfolios in Europe totalled 64 billion euros in 2013 and 470 billion dollars in the US.

4. The European Commission has provided recommendations regarding common principles in this area in order to reduce differences between countries. 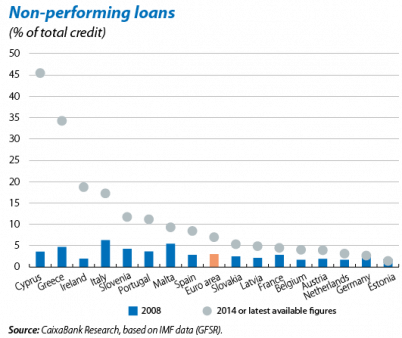 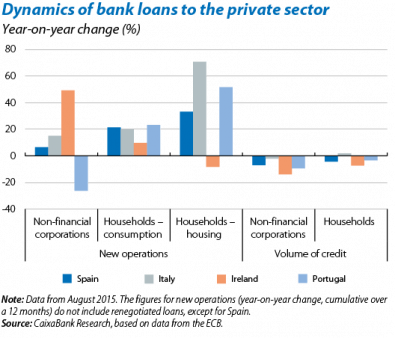