The European real estate market: from recovery to boom

The real estate market is recovering at a good pace in most European countries. In the past two years, EU house prices have risen by 3.5% year-on-year on average,1 compared to average falls of 1.0% year-on-year between 2011 and 2013. Although this increase in prices has been widespread, there are significant differences between countries regarding the speed at which prices are rising. While the increase remains contained in some countries, there has been a sharp acceleration in prices in others, which raises concerns that some sectors may be overheating. This is the case, for example, of Austria, Denmark and Sweden. The UK, on the other hand, constitutes a special case. After years of strong growth, house prices have started to grow at a slower pace (for more details, see the Focus «Brexit and the adjustment in the real estate sector: a dangerous cocktail» in this Monthly Report).

Europe’s rising house prices are partly due to the improved economic situation. EU economic growth has become increasingly stronger over the past few years: from an average of 0.8% year-on-year between 2011 and 2014 to 1.9% in 2016. This improved economic outlook, together with a good labour market performance,2 have led to an increase in household disposable income and wealth, thereby pushing up demand for housing. On the other hand, the recovery of the real estate sector is also due to highly accommodative financial conditions, propitiated by the ECB’s monetary policy, with interest rates at an all-time low.3

Over the coming quarters, both the favourable macroeconomic outlook and the low interest rates environment will continue to support the recovery of the sector and its prices. However, in countries such as Austria, Belgium, Denmark and Sweden, this could become a cause for concern should this upward trend continues or intensifies. In fact, the ratio of house prices to gross household income (an indicator of access to housing) suggests that, in these countries, prices are already close to an all-time high (see the chart) while the level of household debt is also relatively high (see the table).

Given that this upward trend in prices could have considerable implications for financial and macroeconomic stability, there will probably increase the pressure to normalise monetary policy and/or implement macroprudential tools. 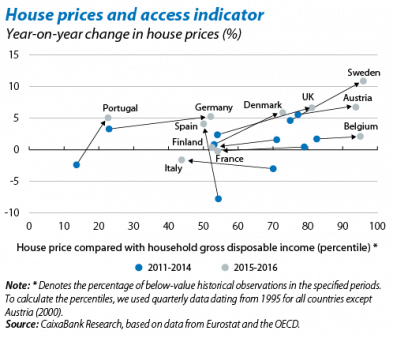