Good outlook for the new year

The outlook for the Spanish economy in 2017 is very favourable. After ending the period of 2015-2016 with GDP growth in excess of 3% in both years, most analysts and major international institutions predict a slight slowdown in the growth rate of Spain’s economy in 2017. According to the CaixaBank Research forecast, growth will remain high, at around 2.6%, supported by the effect of the structural reforms carried out over the last few years which, for instance, have led to a notable increase in competitiveness. Additional support is provided by the positive evolution of the labour market, accommodative monetary conditions and the recent upward trend in the real estate market. Nevertheless, the risks hovering over the macroeconomic scenario are still high although, unlike in the last few years, the biggest now come from abroad. The economic policy finally implemented by the Trump administration in the US, the packed electoral calendar in Europe and the financial fragility of several emerging countries, particularly China, are some of the most important risks.

The rate of growth remains high in Q4. The latest figures indicate solid expansion for economic activity which, for the moment, is showing no signs of slowing down. The CaixaBank Research GDP forecast model predicts 0.68% growth quarter-on-quarter in Q4, a growth rate similar to the figure in Q3 (0.71% quarter-on-quarter). In general, the different indicators published over the last month point to this rate of expansion continuing. Particularly promising is the solidity shown by private consumption indicators, suggesting this component will continue to be the main driver of domestic demand.

In terms of supply, activity indicators show the economy is still comfortably in the expansionary zone. According to the business sentiment index (PMI) for November, activity grew strongly at the end of the year. The indicator for services is still at a very high level (55.1 points), while the one for manufacturing rose to 54.5 points, its highest level since January. Other data confirm this improvement in the industrial sector after a dip in the summer, with the sector’s turnover increasing by 2.0% year-on-year in October. The strong upswing in new industrial orders (5.5% year-on-year in October), especially orders from the euro area, suggests this sector will continue to perform well.

The good activity figures are reflected in the labour market’s positive trend, although the number of registered workers affiliated to Social Security in November was slightly worse than expected. Specifically, this fell by 32,832 people while, in the last two years, the affiliation figures had increased slightly in the month of November. However, this drop can largely be explained by the prolongation of the tourist season until October and the consequent higher job losses in hotels and restaurants in November. If we look at the two months together, the balance is very positive, a favourable trend expected to continue in December as a good Christmas season is predicted. With a view to 2017, we expect the job creation rate to slow down slightly to 2.3%, in line with the lower growth expected in GDP, resulting in around 370,000 more people in work.

Contained wage rises are helping to regain competitiveness. According to the harmonised labour cost index, wage costs rose by 0.2% quarter-on-quarter in 2016 Q3, equalling the figure recorded for Q2. For the time being, the wage increases included in sector agreements, namely 1.1% year-on-year in October, show that rises were still contained in Q4. However, labour costs could see a higher increase in 2017. On the one hand, the government has approved an 8% increase in the minimum wage (see the Focus «The minimum wage in Spain» in this Monthly Report). On the other hand, wage rises may intensify as inflation picks up. According to the CPI flash estimate for December, inflation stood at 1.5% (0.8 pps higher than the previous month’s figure), resulting from higher energy prices. In fact, the rise in oil prices will push inflation above 2% in 2017 Q1. Spain’s inflation differential compared with the euro area will therefore be positive again after being negative for more than three years. This will be due mostly to higher oil prices, which have relatively more impact on the Spanish economy, but it is also an early warning that should serve to further encourage efforts to consolidate the competitiveness gained over the last few years (see the Focus «Spain’s inflation differential with the euro area: historical trend and outlook» in this Monthly Report). Core inflation, unaffected by any fluctuations in energy prices, will continue to rise very gradually thanks to stronger household consumption, still supported by the sustained improvement in the labour market and in conditions to access credit.

The public sector continues its fiscal consolidation but adjustment is still incomplete. The government presented an update of its 2017 Budget Plan, which includes budgetary measures that should help to bring down the public deficit towards the target of 3.1% of GDP. The public deficit targets by administration were also approved. Most of the adjustment falls to central government as the rest of the administrations had already carried out a large part of the adjustment in previous years. The Social Security deficit remains high, revealing its structural nature, while the autonomous communities will achieve a balanced budget in 2019. The report produced by the IMF every year on the Spanish economy has emphasised the need to reduce the public deficit via increases in indirect taxes and by controlling expenditure, particularly on education and healthcare.

The real estate sector remains dynamic. House prices based on sales grew by 4.0% year-on-year in 2016 Q3 (3.9% in Q2), a larger increase than the valuation price index (1.6% year-on-year in Q3). Although price trends vary across the autonomous regions, they have all posted positive annual growth. The Balearic Islands, Catalonia and the Community of Madrid particularly stand out with increases above the state average. This big increase in sales, in October growing at a rate of 13.4% year-on-year (cumulative over 12 months), indicates that the sector’s recovery will get stronger in the coming quarters. However, new building permits are still at a low level, suggesting that pressure on prices will continue (see the Focus «Real estate is starting to pick up again» in this Monthly Report).

The banking sector is also enjoying a good trend. In their follow-up report on the banking sector, the European Commission and ECB praise the efforts made to secure improvements in asset quality, levels of capital and changes in business model. Nevertheless, the report also notes that there is still work to be done on reducing repossessed assets and privatising state-owned banks, necessary steps to strengthen the sector’s financial stability. Spain’s banking sector is therefore more robust and increasingly in a better position to support the recovery. In fact, new bank loans granted to households are increasing strongly. Both consumer credit and loans to purchase housing are still posting high growth rates, 29.4% and 21.8% for the cumulative figure from January to October, compared with the same period in 2015. However, credit to firms continued to slow down in the case of SMEs (2.8%) and to contract sharply for large firms (–33.5%). The NPL ratio increased slightly in October to 9.3% (9.2% in September), but this slight rise can be put down to the commencement of the Bank of Spain’s Annex IX, which has resulted in doubtful assets being reclassified. 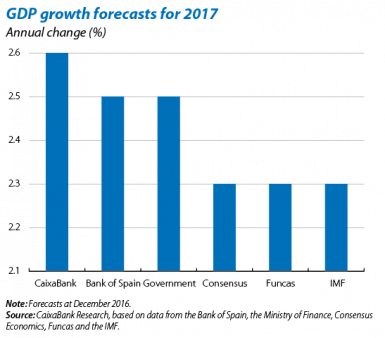 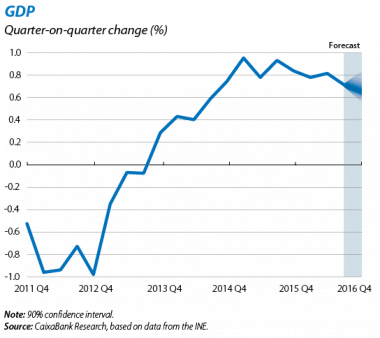 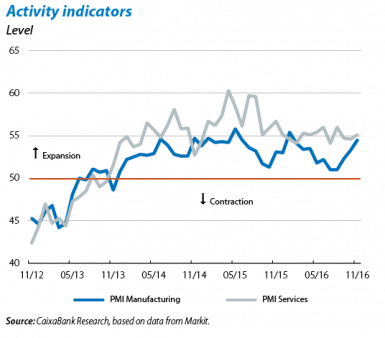 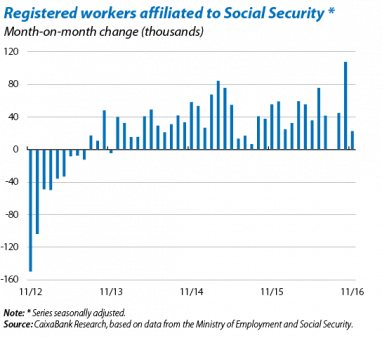 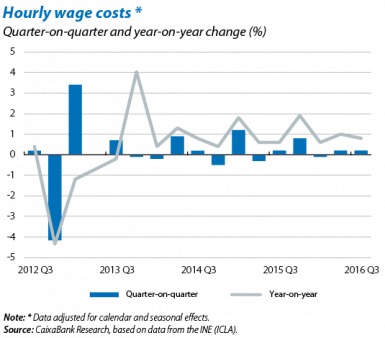 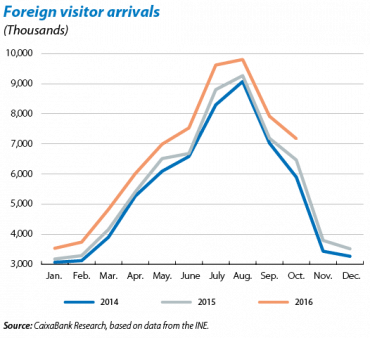 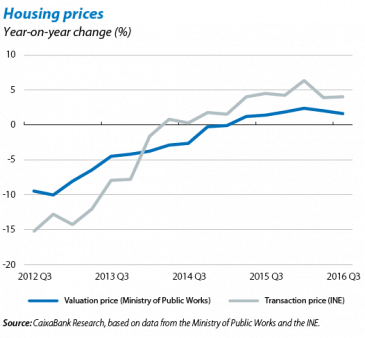 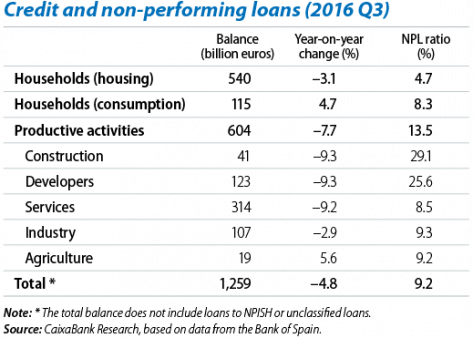