• The Portuguese tourism sector is key to the economy, accounting for around 15% of GDP and 10% of employment.

Over the last few decades we have witnessed a notable expansion in international tourism. Worldwide, the number of tourists increased from 25 million in 1950 to 1.3 billion in 2017, and it is estimated that by 2030 the figure will reach 1.8 billion. In Portugal, tourism has also experienced significant growth in recent years, as we analyse below.

Tourism is a key sector

In Portugal, the tourism sector plays a significant role in the economy and currently represents 15% of GDP and 10% of employment.1 The sector has developed considerably in recent years, with a 51% increase in the number of tourists2 between 2014 and 2018 (see first chart). This growth in demand has been accompanied by an improvement in the quality of national tourist services, which has enabled the average revenue per available room to rise by 54% over the same period and the sector’s profits to grow by 73% in the last five years (see second chart). With the rise in demand, opportunities for investment in the sector have also arisen. Thus, investment in tourist accommodation, through either new builds or the renovation of existing spaces, has contributed to the buoyancy of the Portuguese real estate market and has boosted the supply of tourist establishments, with 20% growth between 2015 and 2018. Furthermore, the sector is particularly important in terms of its contribution to the current account balance. Specifically, tourism exports have gone from representing 15% of total exports in 2014 to 19% in 2018. Nevertheless, it is important to note that, as is the case in Spain, domestic tourists also play an important role in the Portuguese tourism sector. In 2018, national tourism accounted for 40% of the demand for tourism services in Portugal.

In 2017, the sector registered significant expansion and Portugal became the 17th most visited country in the world and the 14th most competitive in terms of tourism. Part of this growth in tourism was due to the diversion of tourist flows as a result of the geopolitical instability observed in competitor countries such as Turkey, or Tunisia and Egypt in North Africa. In any case, following the significant expansion of 2017, with a 16% rise in the number of tourists over the previous year, the sector also managed to maintain its momentum in 2018. In particular, last year the number of foreign tourists reached 15 million, 3% more than in 2017, although this growth was below that of global tourism (5.8%). It should be noted that foreigners accounted for 72% of tourist occupation in Portugal in 2018 and that revenues from international tourism amounted to 1.7 billion euros, representing 10% growth over the prior year. Despite Portugal primarily being a destination for European tourists, as they account for 80% of international revenues, more recently we have witnessed a significant increase in demand from non-European tourists, especially from the US and China. In 2018, the number of tourists coming from these two markets grew by 22% and 14%, respectively, contrasting with 3% growth in the total number of foreign tourists. Furthermore, in 2018 revenues derived from tourists from the US and China increased by 19% and 18%, respectively. With this growth, the US represents 6% of revenues from international tourism and stands as the main non-European market (see third chart).

The sector in 2019 and future prospects

In 2019 the sector remains buoyant, with a growth in demand from foreign tourists of 3% in the first quarter of the year. In addition, tourist demand from the US and China has intensified in Q1 2019, with an increase in the number of tourists of 22% and 24%, respectively. Furthermore, the arrival of tourists from these two markets is expected to continue to rise over the coming months. In fact, the number of plane tickets already booked3 suggests that, during 2019, the number of tourists from the US and China could grow by around 16% and 32%, respectively. Given the size of both markets, this will have a significant impact on tourism in Portugal. In 2018, 0.8% of US tourists and 0.3% of Chinese tourists chose Portugal as a tourist destination. Therefore, if we perform a forecasting exercise, a 0.1-pp increase in the market share of Portugal among US and Chinese tourists would mean a 1.2-pp increase in the growth rate of Portugal’s tourism revenues and a 1.5-pp increase in the growth in the number of international tourists.

Finally, over the coming years, non-European markets are expected to acquire a more prominent role and to contribute to making the Portuguese tourism sector more resilient. 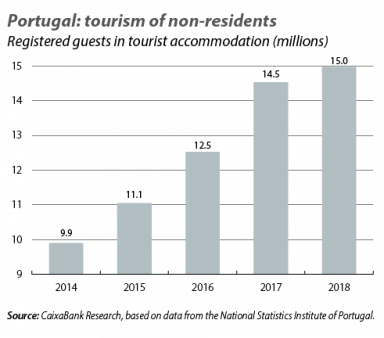 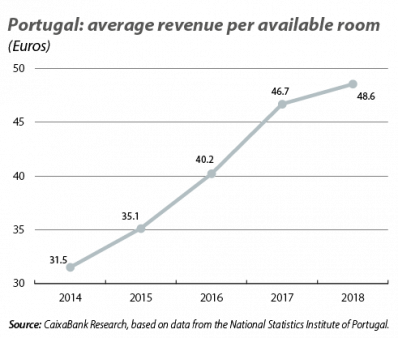 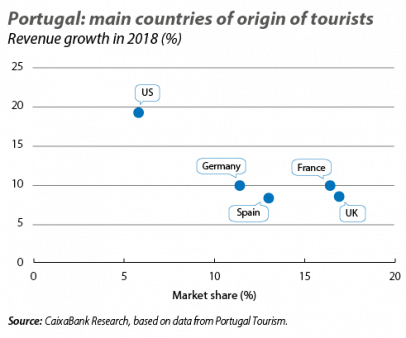 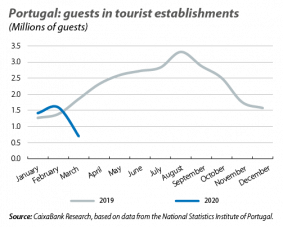 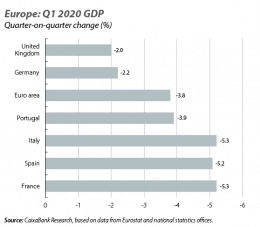