The sun is (still) shining in Portugal

Tourism has always been a very important sector for the Portuguese economy, and in recent years its importance has increased even further. The sector, which accounts for 10% of the country’s employment, has registered strong growth in recent years, well above that of the economy as a whole. This development has been largely driven by the arrival of international tourists, who have also contributed to the vitality of the Portuguese real estate market that has recently been observed. In 2018, however, the sector has shown the first signs of deceleration. Given the significant role it plays, it is important to analyse the consequences of this slowdown for the Portuguese economy.

The gross value added (GVA) generated by tourism has been growing at a rate above that of the Portuguese economy as a whole. For instance, in 2017 it achieved a growth rate of 13.6%, compared to nominal GDP growth of 4.4%. Therefore, as a result of this buoyancy, the tourism sector is taking on an even greater importance than before, and in 2017 it accounted for 7.5% of the national GVA.

Tourism is also a key sector for Portugal’s external accounts, especially due to its enormous contribution to the current account balance. As an example, if we exclude the contribution from the tourism sector, in 2017 the current account balance would have been –5.1% of GDP (versus the +0.5% actually registered). In addition, the sector’s external surplus has increased in recent years, with tourism exports rising from 5.4% of GDP in 2013 to 7.8% in 2017, a growth well above that of imports (tourism exports as a proportion of total exports rose from 13% to 19% between 2013 and 2017, whereas tourism imports as a proportion of the total remained at 5%). Thus, in recent years the tourism sector has fed the country’s external lending capacity, in a context of a deterioration in the balances of the other components.

The strong performance of the Portuguese tourism sector is even more evident when comparing it with other European Mediterranean countries (see first chart). Portugal has registered a growth in the inflow of tourists well above that of countries such as Spain, Italy or Greece, which offer similar tourist attractions in terms of climate and culture. Specifically, between 2013 and 2017, these countries registered an increase in the inflow of tourists of around 25%, compared to 55% growth in Portugal.

Following the notable growth of the sector in recent years, 2018 has brought with it the first signs of a slowdown, with a stabilisation in the number of non-resident tourists.1 Faced with these indicators, we conducted a sensitivity test (see table) to analyse what impact a slowdown in tourism exports in 2019 would have on GDP.2 According to these estimates, in the scenario of a moderate slowdown in the tourism sector as suggested by the indicators (central scenario), the slowdown would deduct 0.15 pps from GDP growth. On the other hand, a hypothetical scenario involving the stagnation of the sector could deduct up to 0.35 pps from growth, a figure that illustrates the importance of tourism for the national economy.

Overall, the outlook for the sector over the next few years is positive. Proof of this is the fact that, despite some signs of a slowdown, revenues per room remain on the rise. This reflects the improvement achieved in the quality of Portugal’s tourist services and indicates that the sector is better prepared to weather an environment of stabilisation or even one with a slight moderation in demand.

1. With a 0.2% year-on-year change in the number of non-resident guests in hotels between January and November 2018.

2. The calculations are based on the weight of tourism exports as a proportion of the GDP of the economy as a whole. 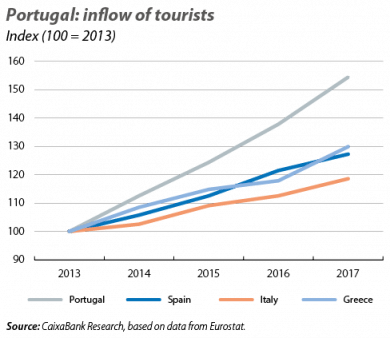 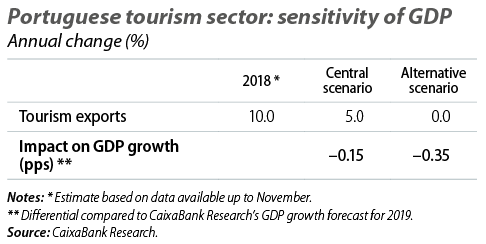 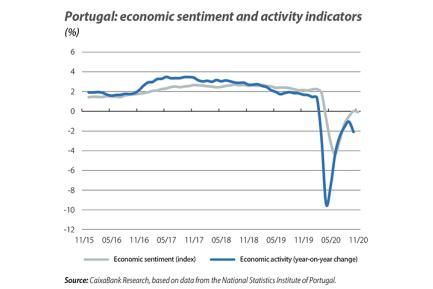