Growth gains traction in Q1 2019. According to data from the National Statistics Institute of Spain, GDP grew in the first quarter of the year by 0.7% quarter-on-quarter (2.4% year- on-year), above the average growth of the euro area (0.4% quarter-on-quarter). In the breakdown by component, the data show that domestic demand remained the main driver of growth, boosted mostly by investment. As such, following the temporary fall that occurred in Q4 2018 (–0.2% quarter-on-quarter), investment rebounded in earnest to grow by 1.5% quarter-on-quarter. Growth in private consumption also remained strong, albeit more moderate than in the previous quarter (–0.1 pps down to 0.3% quarter-on-quarter). Although this stands in contrast to the strong growth in employment shown by the data from the labour force survey (LFS), it is still considered normal given the inherent volatility of the series. In addition, the figure is consistent with CaixaBank Research’s scenario, which predicts that consumers will moderate their rate of spending in 2019 after having followed through, over the past few years, on the consumer choices that were postponed during the financial crisis. External demand, meanwhile, continued the improvement it had shown in the previous quarter and contributed 0.2 pps to GDP growth in quarter-on-quarter terms. However, this contribution was due to the fact that imports fell by more than exports (–1.1% and –0.5% quarter-on-quarter, respectively). As such, we see that the trade flows continue to moderate, as we would expect in the current global context of trade tensions and moderation in the growth of the euro area. Overall, incorporating this figure has led us to revise the GDP growth forecast for 2019 slightly upwards by 0.2 pps, bringing it to 2.3%.

The economic activity indicators remain encouraging. Although the economic activity data for the second quarter of the year are not yet known, the latest available indicators show that economic activity has gained strength in the year to date. The PMI for the services sector rebounded in March by 2.3 points up to 56.8 points, the highest value since February 2018. The index for the manufacturing sector, meanwhile, remained somewhat contained but nevertheless rose by 1 point up to 50.9. On the other hand, retail sales grew by 1.7% year-on-year in March, 0.3 pps more than in February and above the average for 2018 (0.7%). Finally, the most modest figure came from industrial production, which remained stagnant (–0.2% year-on-year). This figure reflects, at least in part, the current troubles in the automotive sector, which continues to feel the impact of the Europe-wide changes in the regulation of the sector and the lower momentum of external demand.

The labour market provides a pillar of growth. The labour market performed very well in the first quarter of the year, as shown by the fact that job creation rose by 0.2 pps up to 3.2% year-on-year (597,000 jobs were created in the past 12 months), the fastest rate in the past three years. The latest data from the quarterly labour cost survey, meanwhile, have confirmed the slight rising trend in wages. More specifically, the cost of labour per effective hour increased by 1.4% in 2018 (0.0% in 2017). In addition, the wage increases agreed in collective labour agreements stood at 2.2% in March, 0.7 pps higher than the value registered in March 2018. Thus, the buoyancy of the labour market is contributing to maintaining a positive climate of confidence and to increasing households’ gross disposable income.

Slight rebound in inflation in March. Headline inflation stood at 1.3% year-on-year in March (1.1% in February) and increased for the second consecutive month following three months of moderation. However, this was not reflected in core inflation, which remained at 0.7%. In other words, the rebound in inflation was entirely due to the non-core components, and more specifically to fuel and electricity prices.

Non-energy goods continue to reduce the current account surplus. The current account balance stood at 9,380 million euros in February 2019 (0.77% of GDP), 1.0 pp below the figure for February 2018 (1.79% of GDP). By component, 7 tenths of this decrease can be explained by the deterioration in the balance of goods, of which 4 tenths correspond to non-energy goods and 3 to the increase in the price of oil. The lower surplus in services, meanwhile, deducted 3 tenths from the current account surplus, distributed equally between tourism and non-tourism services. Finally, the balance of revenues (–1.1%) remains virtually unchanged thanks to accommodative financial conditions that are keeping the cost of external debt under control.

The general government deficit deteriorates slightly. The budget implementation data available up to February reflect a deterioration in the public accounts for the general government as a whole, with the exception of local government corporations. Thus, in the first two months of the year, the cumulative public deficit increased by 1 decimal point relative to the figure for February 2019, standing at 0.95% of GDP. It should be noted, however, that this result is affected by several extraordinary factors, on both the revenue and the expenditure sides (accounting effects, the temporary suspension of the tax on the value of electricity production and refunds related to maternity benefits, among others). As for the central government deficit, based on the data available up to March it stood at 0.54% of GDP, 2 decimal points above the figure for March 2018.

Deleveraging continues in the private sector. In 2018, the debt of households and non-financial corporations stood at 58.9% and 93.2% of GDP, respectively, 2.2 and 3.2 pps below the figures for 2017. As such, household debt now lies close to the euro area average (57.6%), while that of non-financial corporations remains clearly below it (euro area average of 105.9%). This sustained reduction in debt, for the sixth consecutive year, shows that the Spanish economy is now in a healthier position. Looking ahead to the next few quarters, we expect private sector debt to continue to fall, albeit at more moderate rates. 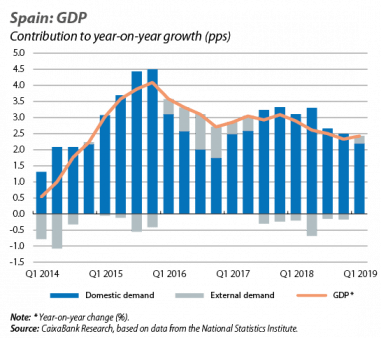 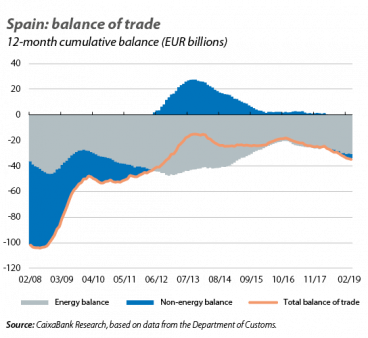 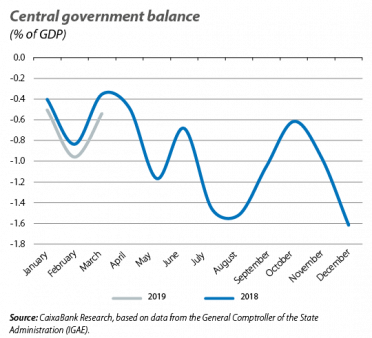 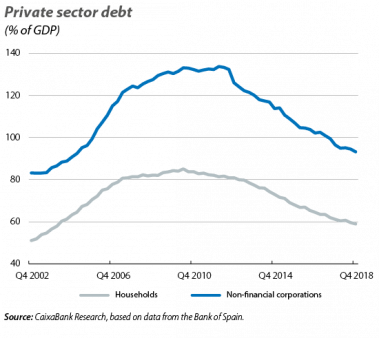