A year of transition towards more sustainable levels of growth

The outlook for the Spanish economy remains favourable. The latest available data suggest that the Spanish economy closed 2018 with a growth rate of 2.5%, while for 2019 we expect the economy to continue to grow at a high rate, albeit somewhat more moderate than in the previous year. More specifically, we expect growth of 2.1%, a figure similar to the forecasts of other financial institutions, such as the Bank of Spain, which in its latest quarterly report places growth for 2019 at 2.2%. This moderation in the pace of expansion is due to the fading of the support factors that have provided a boost to growth in recent years (low oil price, low interest rates and acceleration in global growth) and less cyclical momentum. All in all, growth will stabilise at high rates that are more in line with the economy’s potential, which we estimate at around 1.8%. By component, we expect that domestic demand will continue to be the main driver of growth, thanks to the encouraging developments in the labour market and the positive climate of confidence. We also expect exports to recover, at least partially, after a few quarters of lower-than-expected growth. Nevertheless, the pressure that domestic demand will exert on imports leads us to predict that the external sector’s net contribution to growth will be very limited.

The economic activity indicators point towards a good end to the year, and CaixaBank Research’s GDP forecast model predicts quarter-on-quarter growth of 0.61% in Q4 2018, similar to that of Q3. The balance of the various indicators as a whole is positive, and this has been reflected in a growth forecast that has improved over the course of the month. More specifically, the latest indicators have shown an upswing in sentiment (in November, the manufacturing PMI rose by 0.8 points to 52.6 points and consumer confidence rose by 0.6 points up to –6.6 points), as well as in economic activity in the manufacturing sector (industrial production grew in October by 0.8% year-on-year in seasonally-adjusted terms, +1 pp compared to the previous month) and in consumption (in October, retail sales picked up, growing by a healthy 4.5% in seasonally-adjusted terms, 3 pps higher than the figure for September). In addition, this positive trend has not been hampered by the slowdown in exports (3.0% year-on-year in September, –2 pps compared to the previous month).

The labour market continues to generate employment and the recovery in wages is confirmed. The number of workers affiliated to Social Security grew by 2.9% in November. Therefore, since November 2017 the number of affiliated workers has risen by 527,869 people, a very significant figure that helps to explain the trend in domestic demand and the positive climate of confidence in the economy. Nevertheless, compared to the 3.1% growth registered in October, the figure for November was solid but remains in line with our expectation that job creation will gradually moderate over the coming quarters. The latest data from the National Statistics Institute, meanwhile, show that labour costs per effective hour picked up, growing by 2.5% year-on-year in Q3. This figure clearly exceeds the 1.2% registered in Q2 and the average for 2017 (0.0%), and it is relatively in line with the figure for Q3 for the euro area as a whole (2.2%). These figures thus confirm a gradual recovery in wages, which we expect to continue over the coming quarters. What is more, at the last Council meeting of Ministers, the Government approved an increase to the minimum wage, up to 900 euros (+22.3%). It also approved a fixed salary increase for public sector employees in 2019 of 2.25% (with an additional 0.25% for central government employees), to which a further 0.25% could be added if GDP growth were to rise above 2.5%.

The savings rate fell slightly in Q3 and stood at 4.7% of gross disposable income (GDI), 0.2 pps below the figure for the previous quarter. The trend in savings reflects the positive developments in private consumption, which grew by 4.0% in Q3 in nominal terms. All in all, the gradual recovery of GDI, which grew by 2.7% year-on-year, 0.6 pps above the figure for Q2, allowed the drop in the savings rate to be less significant than in previous quarters. As for the coming quarters, we expect that households will moderate their growth in consumption slightly and will use the expected growth in income, driven by the increase in employment and wages, to begin to rebuild their savings buffer.

Energy goods continue to weigh down the current account surplus. The current account balance stood at 12,254 million euros in October (1.02% of GDP), lower than the figure for October 2017 (1.80% of GDP). This difference, which amounts to –8,522 million euros, is almost entirely due to the deterioration in the trade balance of energy goods, which once again had a negative contribution and fell in October by 0.12 pps of GDP compared with the previous month. As for the year end, the decline in the oil price in November and December could provide some relief to the deterioration of the trade balance.

Housing prices continue to grow steadily in Q3, with a 7.2% year-on-year increase (based on sale prices per the National Statistics Institute, or NSI), 0.4 pps above the previous quarter and higher than the average for 2017 (6.2%). This is in line with the strong indicators of supply (residential investment) and demand (sale transactions) that are available for Q3, suggesting some buoyancy in the housing market. However, this indicator contrasts with the price growth figure published by the Ministry of Public Works (a series based on appraisal values) for Q3, which showed a moderation in the growth of housing prices. These divergent trends should not come as a surprise, considering that the two series are based on separate data sources. That said, it should be noted that since the NSI’s indicator uses transaction prices based on data from public notaries, rather than appraisal values, it ought to be a more reliable indicator of price trends in the real estate market. Looking ahead to the next few quarters, we expect that prices will continue to grow at a steady rate, thanks to the strength of demand and the accommodative financial conditions, albeit at a somewhat slower rate than the levels reached in recent quarters. 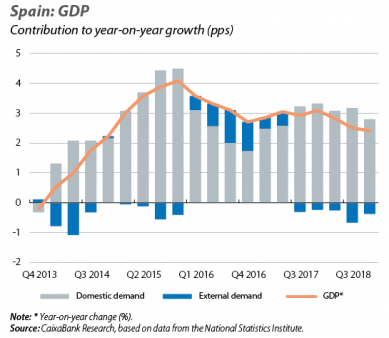 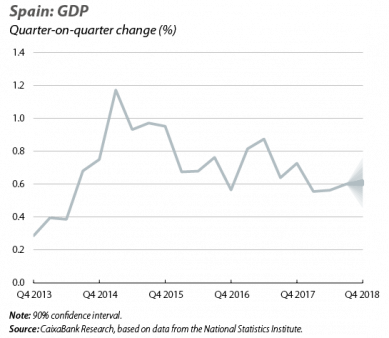 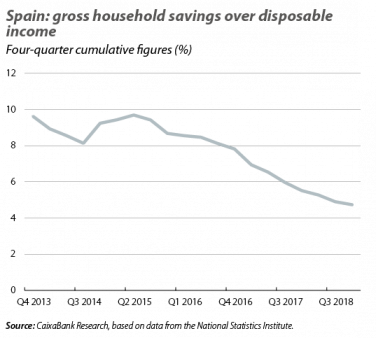 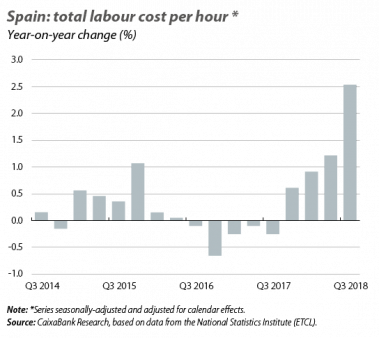 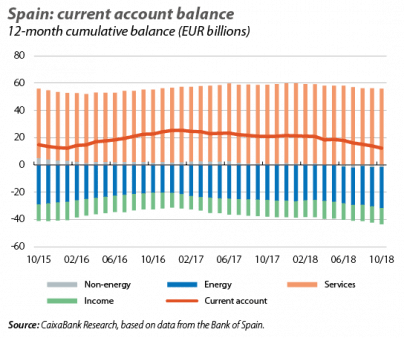 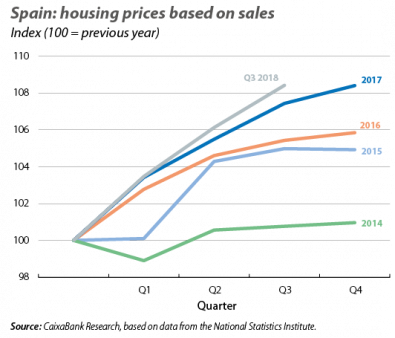