Are France and Italy taking the right measures?

In the end, no country in the euro area has been fined by the European Commission after its detailed analysis
of their state budgets but the Commission has warned seven countries of their possible deviation from their deficit targets. The situation is particularly delicate for France and Italy as they will have to go through a second review in March and face potential sanctions should specific actions not be taken, with precise schedules, to speed up deficit adjustment and implement structural reforms. Both countries have justified their slow progress by the huge effort they will have to make after the deterioration in the expected macroeconomic scenario and the structural reforms announced. But how far is this actually the case?

In France, the measures to contain government spending included in its 2015 budget have been estimated at 21 billion euros and this effort is shared by all administrations; central government, local government and Social Security. In spite of these measures, public expenditure is still expected to rise by 0.2% in real terms although we should note that such a low figure is unusual in France: in 2012 the increase was 1.1% and in 2013 it was 1.3%. The government also expects GDP to grow by 1% next year which, should it happen, would help to reduce the share of public expenditure in GDP.

The government spending cuts in Italy's budget total 15 billion euros. The details regarding how the country will achieve such savings, however, have not been as fully specified as the French case, at least at present. More details have been released, however, regarding the considerable reduction planned for the tax burden, which will cost 18 billion euros. The main beneficiaries will be more modest households, which will pay 80 euros less per month in tax.

Consequently, the measures announced to cut government spending are not minor. Nevertheless, it is equally noticeable that, once all these measures are taken into account (including those of tax reductions), the resulting reduction in the deficit is very limited in both cases. The French government forecasts a deficit of 4.3% (4.4% in 2014) when the target initially agreed with Brussels was 3.0% while in Italy the deficit is expected to be 2.6% (3.3% in 2014) compared with a target of 2.2%. Albeit unwillingly, Brussels has accepted these deviations to a certain extent without imposing economic sanctions at present but, in exchange, an agreement has been reached to implement an ambitious agenda of structural reforms. Let us therefore examine this other aspect of the economic situation.

This year France approved its Responsibility and Solidarity Pact which reduces Social Security contributions and corporation tax, on top of the «crédit d'impôt pour la compétitivité et l'emploi» (tax deductions approved in 2013) to make firms more competitive. Moreover, additional measures were announced in October such as a cut in the tax levied on regulated sectors, less bureaucracy for start-ups and a reduction in the number of regions.

For its part Italy plans to simplify its tax system in 2015 (known as the «delega fiscale») as well as carrying out fiscal reforms. Matteo Renzi has also promised to approve the reform of the judicial system, in addition to ambitious labour reforms. The latter have already overcome their first obstacle with the Senate passing the draft bill last October.

The list of reforms seems ambitious in both countries. According to OECD estimates, in France the growth rate could increase by 0.3 pps a year over the next five years should the reforms announced be implemented in their entirety. In the case of Italy, the government estimates that all the reforms presented would increase growth
by 0.1 pps in 2015 and by 0.3 pps in 2016.

In short, it seems as if France and Italy are gradually changing the direction of their economic policy and starting to take measures to boost their economic growth. We should remember, however, that many of the reforms announced have yet to be approved and implemented. Moreover, both countries still have very high levels of debt. They will have to get a move on if they want to stop attracting so much attention. 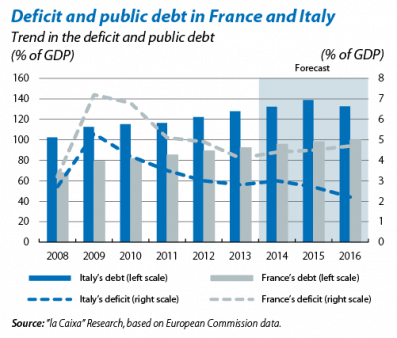