Bank deleveraging in Europe: repercussions in the emerging world?

We tend to analyze the euro area's financial crisis from what we might call a Eurocentric perspective. We are concerned, for example, that the bank deleveraging occurring might hinder the Old Continent's growth by restricting credit. Although understandable, this view eclipses others resulting from the process. In particular, little is mentioned in the debate about the possible impact of the euro area's bank deleveraging on the financing of other regions in the world, in particular on the emerging economies. However, this is a relevant question as two issues are involved here that are not always taken into account.

The first, the great importance of foreign credit in financing emerging economies. According to data from the Bank for International Settlements (BIS), between the first quarter of 2005 and the third of 2011, the last quarter with data available, foreign assets with regard to emerging economies in the hands of banks practically tripled, currently reaching 4.8 trillion dollars, an amount approximately equivalent to 25% of the emerging economies' national credit and 20% of their GDP. This is also a notably dynamic process as, in spite of the fact that four out of these seven years have been dominated by the global financial crisis, foreign credit has managed to grow by an average of 5% quarter-on-quarter. This dynamic context lessens the potential impact of the fall in external bank assets recorded in the third quarter of 2011 and the fact that this will probably continue in the fourth quarter.

A second issue, not always remembered, is the dominant role of European banks in this external financing. As can be seen in the graph below, approximately 44% of international bank financing comes from banks in the single currency area, followed by British banks in terms of importance (19% of the total). US banks would have a slightly lower share, in the order of 15% of the total. To complete this view, we should also mention the geographical distribution of European international bank financing. As might be expected, this is especially prevalent in emerging Europe (80% of external assets are in the hands of euro area banks) and, as a distant second, in Latin America (50%). Its importance is slightly less in emerging Asia and Africa.

Taking both facts together, namely that of the growing importance of foreign bank credit for emerging economies and the fact that Europe dominates this kind of financing (especially in emerging Europe), the concern expressed by some analysts is easy to comprehend: if European banks opted to reduce their leveraging in terms of their emerging counterparts in order to meet the new capitalization requirements, might credit suddenly flounder for the part of the globe that, so far, has managed to preserve growth?(1)

The answer, today, is that there are two significant factors that might help to reduce this risk we have just mentioned: i) the capacity of other zones to at least partly replace the role played by the euro area in emerging external financing, and ii) the fact that the true vulnerability of emerging Europe to handle the effects of a hypothetical deleveraging is actually more intricate.

When we analyze the trend in external credit to the emerging economies as a whole, we can see that the role of external financing coming from the euro area is being replaced by financing through banks in the United States, the United Kingdom and the rest of the world. In quantitative terms, the euro area's share has fallen by 10 percentage points since the fourth quarter of 2008 (when it was at its peak), with the US and British share increasing by four percentage points and that of other countries by the remaining two points. All this, as has been mentioned above, within a context of growth in the overall volume of external assets related to the emerging economies. Various analysts agree that there are reasons to believe the banks of China and the United Kingdom might continue to play a compensatory role in the future, should European deleveraging be incredibly acute, especially in the critical region of emerging Asia.

With regard to the second of the factors mentioned above, the one related to emerging Europe, a recent BIS study suggests that this risk is less due to the composition and maturities of external bank credit.(2) So, although the BIS states that emerging Europe has weaknesses given the high share of foreign banks in the countries' total credit (approximately 50% of the total credit is held by euro area banks, with slightly higher rates in countries such as Hungary and Romania), the predominance of credit to their subsidiaries (compared with credit to firms, the public sector, etc.) partially limits Europe's financial vulnerability. This is due to the fact that the first of these types tends to be less volatile than the second, providing greater protection against any sudden changes in financial orientation on the part of foreign banks.

A second aspect related to the composition refers to the type of cross-border securities in question. If these are tradable debt securities (as opposed to non-tradable loans), the ease with which foreign creditors can get hold of their assets is greater (and, therefore, so is the vulnerability of the emerging economy in question). In accordance with the BIS figures, only 10% of the international assets held by euro area banks are in the form of tradable securities. Lastly, with regard to the maturity structure, this also helps to reduce the risk of any sudden reversal in external financing since, within the external assets portfolio of euro area banks, those whose counterparty is emerging Europe tend to be long-term (maturities longer than one year, accounting for two thirds of the total, compared with, for example, 50% from emerging Asia).

In short, we'll have to wait a while to be able to give a definitive judgement on this issue. Nonetheless, from the previous discussion we can conclude that the importance of European banks in the external financing of emerging countries, particularly in emerging Europe, means that attention should be paid to how Europe's deleveraging is progressing, albeit with the proviso that the international financial system could partly replace the role of European banks, using financing from banks in other zones and other types of financing, such as bonds, and also by reducing the concentration of risk in emerging Europe by means of the type and maturities of financing.

(1) A prior but distinct debate to the one that concerns us here is related to the scope this deleveraging process will ultimately have. As pointed out by a recent BIS study, this is an open discussion, with differing deleveraging calculations that range from 0.5 trillion dollars to 3 trillion dollars for the coming years; i.e. a figure of between 1% and 5% of the EU's total bank assets. See, in particular, Peter, G., M. Drehmann and V. Sushko, (2012), «European bank funding and deleveraging», BIS. Quarterly Review, March, and Morgan Stanley, (2011), «European Banks. What are the Risks of 1.5-2.5tr Deleveraging».

This box was prepared by Àlex Ruiz 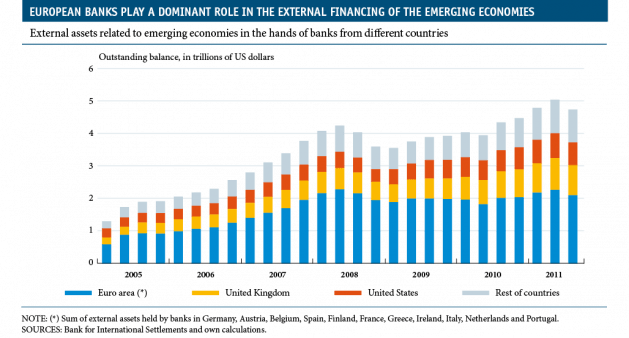