Last April, Apple issued bonds totalling 17 billion dollars to help finance a share buyback scheme. This technology company has a privileged liquidity position (145 billion dollars) but most is located outside the borders of the US. Repatriating this liquidity would have resulted in a considerably higher tax bill than the cost of corporate debt, hence the decision to get indebted. Moreover, interest payments are deductible from corporate tax. Apple's strategy is a clear example of how the taxation system is not neutral when it comes to determining the financing structure of firms.

In this respect, tax systems generally allow the cost of debt to be deducted but not the cost of equity, representing an implicit subsidy for debt. So, if all other variables remain constant, a company with a high level of leveraging pays less corporate tax than a more capitalised company. This tax bias in favour of debt has at least three economic implications. Firstly, it leads to an increase in leveraging that accentuates financial instability in economic cycles. On the other hand, it penalises those companies that find it difficult to access debt markets or credit, which fundamentally base their financing on capital or assets of shareholders. This is the case, for example, of high risk companies with volatile earnings, such start-ups dedicated to innovation or new firms. Lastly, less corporate tax is collected due to the existence of this implicit subsidy for debt (the higher the interest rates, the greater the impact).

In the last few years, some countries have introduced fiscal reforms limiting this bias in favour of debt-based financing. Complete neutrality has not been established, however. In general, two options have been suggested: one proposal consists of eliminating tax-deductible interest payments (and thereby establishing a so-called Comprehensive Business Income Tax). Eliminating such deductions ensures fiscal neutrality but at the cost of making debt-based financing more expensive and reducing, in the short term, incentives for investment.

Another alternative (ACE, Allowance for Corporate Equity) consists of a deduction for the notional return on equity when calculating corporate earnings, at the same time as maintaining tax-deductible interest payments on the debt. To calculate this notional return on equity, a risk-free interest rate can be used as a reference such as that of sovereign bonds, adding a risk premium (something which does not always happen in practice). This proposal, made in 1991 by the British Institute for Fiscal Studies, does not distort the cost of financing and guarantees the same tax bill irrespective of the structure of a firm's liabilities and net assets. However, applying this scheme means less revenue for the public administration because introducing new deductions narrows the taxable base.

De Mooij and Devereux(1) have estimated the effects of introducing the ACE in the European Union using different scenarios and simulations. If the nominal corporate tax rate remained the same and the fall in revenue was offset by higher taxes on consumption, it is estimated that the leverage ratio (debt in relation to total assets) would fall by around 5 percentage points while investment would grow by 6%. Those countries with the highest corporate tax and therefore the greatest distortion would benefit the most from this measure. Examples of this would be Germany, Italy and Spain.

However, the benefits of this reform are much more limited if the nominal corporate tax rate is raised to offset the reduction in the taxable base. If a country increased its corporate tax unilaterally, the mobility of capital together with the tax arbitrage of large firms would tend to neutralise any benefits resulting from the reform. For this reason, any initiative moving in this direction would be more likely to succeed if its implementation was coordinated at an international level, such as within the European Union.

De Mooij(2) estimates that, on average, the drop in fiscal revenue resulting from applying the ACE would be in the order of 0.5% of GDP. One way of reducing this impact would be to allow tax deductions only on new equity, whether this comes from retained earnings or from issuing new bonds. Allowing deductions also for existing equity would result in a high fiscal cost in the short term without modifying the incentives for firms.

There are examples of countries that have modified their tax systems to include the ACE scheme. Austria, Italy and Croatia introduced deductions on returns from equity but eliminated them years later when they reduced their nominal rates for corporate tax. The Brazilian system currently allows this kind of deduction albeit limited to the distribution of dividends and not retained earnings. So far, Belgium is the paradigmatic case of the ACE reform.

Since 2006, the Belgian system has allowed the theoretical return on equity to be deducted from company earnings. To calculate this, the average rate for ten-year sovereign bonds is used, at around 4% between 2006 and 2011. However, the government limited this rate to 3% in 2012 and has reduced it again to 2.7% in 2013. Most companies can benefit from this measure and there are no requirements in terms of retaining earnings or investment. The weighted average of equity during the year is used as a basis and the profit from the year is not included in the calculation for the present year. Initially, if the theoretical return on equity exceeded earnings, deferred tax assets could be generated over a period of seven years but this possibility was eliminated in 2012.

In a recent article, the winners of the 5th Jaime Fernández de Araoz Award for Corporate Finance, Panier, Pérez-González and Villanueva,(3) demonstrated that Belgium's reform has had a significant effect on the financing structure of firms. The ratio of equity to total assets in large and medium-sized Belgian firms rose by 5 percentage points, from 32.6% to 37.6%, between 2005 and 2009. Using companies from neighbouring countries as a control group (France, Germany, Luxembourg and the Netherlands), the authors estimate that this reform was directly responsible for at least 3 percentage points of the increase. This rise can be explained by the increase in equity in absolute terms and not so much by the reduction in debt, which only fell slightly. Companies capitalised by issuing more equity and have hardly altered their dividend or retained earnings policy.

The Belgian case is a good example of how far corporate tax distortions can affect the structure of financing. Although the ACE reform has fiscal repercussions, it could help to address both short-term and structural challenges. Short-term challenges: insofar as it makes it easier for firms to recapitalise in periods of deleveraging such as the present. And structural: ensuring that debt is taxed neutrally.

(3) «Capital Structure and Taxes: What Happens When You (Also) Subsidize Equity?» (May 2013). Working Paper, Stanford University. 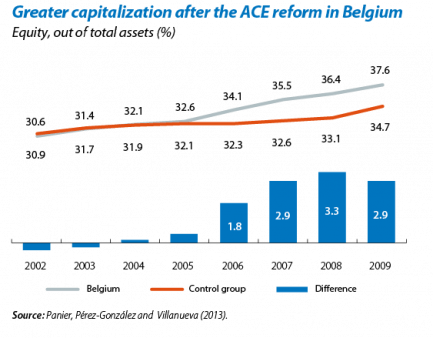