The accumulation of a series of imbalances in the EMU resulted in a sovereign debt crisis and is forcing a rethink of the Union's very foundations. Tensions have revived the idea that the EMU does not fit what the eminent Robert Mundell defined as an «optimal currency area» due fundamentally to excessive nominal rigidities within a context of little labour mobility between countries and the euro area's limited fiscal power as a whole. At the time, such limitations helped to produce imbalances and are now complicating their resolution given the different economic situation experienced by some countries (in the core) and others (on the periphery).

Bearing out the old adage of «every cloud has a silver lining», the first big crisis faced by the euro area has brought about an ambitious process of structural reforms, both at the level of country and of the EMU, which aim to rectify these deficiencies. At the same time the periphery has also embarked on a process of correcting its imbalances (fiscal, external and in private debt) that continues to make progress, slowly but surely, boosted by these reforms. In the external area, the adjustment in the respective current account deficits has certainly been extraordinary.

According to figures by the IMF, and as illustrated in the graph below, the countries on the periphery(1) have gone from an aggregate current account deficit of around 7% of GDP in 2008 to a modest figure of 1.7% of the GDP forecast for 2012. On the other hand, and albeit with a less drastic reduction, the countries in the core have gone from a surplus of close to 4% of GDP in 2007 to 2.6% of GDP in 2012. Broadly speaking, the EMU will have already corrected almost 80% of its current account imbalances (in relation to what the IMF considers to be its equilibrium level).(2)

What has brought about this rebalancing? In addition to the effect of the economic cycle, there have also been three fundamental factors: improvements in price competitiveness in the periphery, greater geographical and/or sector diversification of exports and a structural-based moderation in domestic demand. Depending on the real relevance of these hypotheses, the correction is more or less likely to be structural and not merely cyclical. Let us therefore look at each factor in turn.

The loss of price competitiveness in the periphery economies compared with their partners in the core between 2000 and 2007 became a decisive factor in intra-euro imbalances. Similarly, the gains achieved since the crisis started (see the graph below) have helped the current process of intra-euro rebalancing. Undoubtedly, both exports and the correction of imports in the periphery have benefitted from the reduction in unit labour costs (ULC) compared with their European partners, largely boosted by structural reforms and particularly regarding labour. However, not all peripheral countries have seen an improvement in this area; Italy, for example, has continued to lose competitiveness compared with its partners.

The efforts being made, particularly in the periphery, to diversify exports beyond the usual markets and sectors has also helped to rebalance the current balances of the euro countries but, as in the case of competitiveness, this has not been the same for all countries. Some economies, Spain in particular, have taken advantage of the crisis as an incentive to exploit the potential offered by economies such as China, India and Brazil, boosting the penetration of their exports to these markets. However, others (including Italy) have not promoted their commercial ties with the large emerging economies and have seen their penetration fall in these markets. For their part, and even though this is a positive step per se, some countries in the core of Europe, such as Germany, have also been able to take advantage of the situation to improve their trade with the large emerging countries, lessening the rebalancing of current accounts in the EMU and therefore the relative weight of diversification as a factor to boost this correction.

And although the recovery in price competitiveness and the efforts to diversify being made by deficit countries have helped to restore the external balances of the euro countries, these have not been the only decisive factors or actually the most important ones. Most of the merit goes to the moderation in domestic demand in the periphery. A recent study by Lane and Milesi-Ferretti confirms that the more contained growth in domestic demand in peripheral countries (and the higher the current deficit before the crisis, the greater this containment) has been the key factor in correcting their current account deficits. By way of example, and according to the same study, the contraction in Spain's domestic demand lies behind about 60% of the correction in its current account deficit since the start of the crisis to date.(3) This effect has been significant, although it could have been greater if the core economies had compensated, to a greater extent, the fall in demand of the periphery with expansionary demand policies.

The significance of this contraction in the periphery's domestic demand as a corrective factor of the euro area's current account balance raises doubts as to the sustainability of this correction once the economic cycle picks up. Given this situation, we must look to the considerable structural changes, both at the level of country and also the euro area, which aim to lay the foundations for more balanced growth. In this respect, the fact that the periphery's significant gains in competitiveness are largely due to structural reforms suggests they are likely to continue. Similarly, the advances being made towards greater and better coordination of macroeconomic policies at the level of the EMU will also help the correction of imbalances to continue, as well as more balanced medium-term growth (see the box «Ask not what Europe can do for you - ask what you can do for Europe»).

In short, the gradual recovery in price competitiveness of the countries on the periphery and particularly their restrained domestic demand (part cyclical, part structural) have boosted the correction of the euro area's current account imbalances. However, there's still a long way to go: competitiveness to be garnered by the periphery; greater backing for the rebalancing process on the part of the core economies by boosting their domestic demand; and ambitious advances towards more solid economic and monetary union.

(1) The distinction between countries in the core and periphery is not according to geographical criteria but to the size of their imbalances for the period2000-2008. See the graph for an exact list.

(2) Estimate based on the findings of Lane, Philip R. and Gian Maria Milesi-Ferretti (2012) (see the reference in footnote 3) and on the IMF's medium-term forecasts (WEO, October 2012). 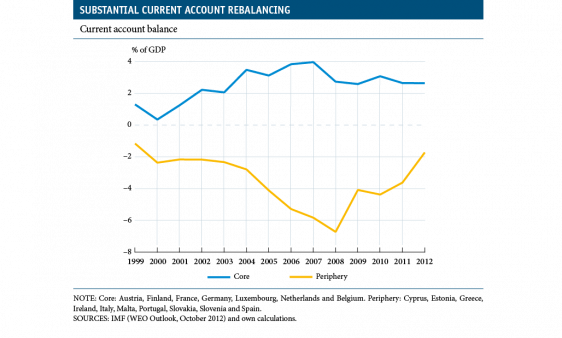