The recovery continues at a moderate but sustained pace. The rate of expansion of the euro area's economy has been maintained, supported by the good performance of domestic demand. Although the ECB pointed to an increase in external risks in its decision to extend QE, the outlook for Europe's economy is favourable and in line with expectations. This is shown by the ECB's own forecasts which hardly varied the scenario for growth and inflation in December. It therefore expects economic growth to increase from 1.5% in 2015 to 1.9% in 2017. The weakness of inflation in 2015 is largely due to lower prices in the energy component, a factor that will disappear in the medium term. In the coming months we expect the economy to still benefit from low oil prices, as well as from accommodative monetary policy, a favourable exchange rate for exports and less fiscal consolidation. However, these are temporary factors and it is therefore necessary to continue with structural reforms, both at this country level and also in the euro area as a whole (economic, fiscal, banking and political union), in order to ensure sustained growth over the long term.

Domestic demand fuels the economy in Q3. GDP continued to grow by 1.6% year-on-year in Q3 in spite of the negative contribution by foreign demand. Behind the good performance of domestic demand lies the growth in consumption, both public and private. At the country level we can see a similar dichotomy between the performance by foreign and domestic demand. Aggregate consumption (private and public) improved its year-on-year growth in Germany (2.3%), Spain (3.3%) and Italy (0.9%), while it slowed up slightly in France (1.4%). Yet, growth in investment slowed up in the euro area (2.2%), although it continued to accelerate in Germany (2.2%), Spain (6.5%) and Italy (0.9%) and stopped hindering growth in France (0.0%). Exports deducted from year-on-year growth although this was due to a larger rise in imports (exports still grew), a natural consequence of the positive tone in domestic demand which is clearly driving the recovery.

Activity continues to grow in Q4. The data available for Q4 indicate that economic expansion continued in the last quarter of the year. The PMI indices are still at their highest level since May 2011, clearly in the expansion zone (above 50 points) and both for the composite index and also for manufacturing and services, suggesting a widespread expansion in activity. Moreover, industrial production once again accelerated its year-on-year growth in October (1.9%) after a slight slowdown in September. Within the EU, Germany's PMI and IFO activity indices still point to an acceleration in activity in Q4. However, France seems to be undergoing a weaker expansion in activity with a PMI activity index in December (50.3) that was lower than in previous months and close to stagnation.

Consumption continues to advance. The trend in demand indicators in Q4 is also positive. Consumer confidence improved in November and December, approaching the end of the year with values similar to those of the summer. The latest figure for retail sales indicates that they continued to grow in October, by around 2.5%, bringing the year-on-year rate in line with the average for the year. Another indicator reflecting the good tone in consumption, automobile registrations, grew by 11% year-on-year in November and continues to post record highs not seen since 2010. The industrial production of capital goods speeded up in October with a year-on-year rate of change of 3.4%. On the whole these indicators point to a clearly dynamic recovery, also in demand.

Improved activity stimulates job creation. The euro area's employment grew 11 year-on-year in Q3. Across countries, job creation was also positive. Of note is the high job creation rate in Spain, close to 3% year-on-year in the first three quarters of the year, while Italy also saw an increase in job creation, up to 0.85% in Q3. Moreover, unemployment fell in the euro area in October to 10.7%, 0.8 pps lower than September's figure, although there are still important differences between countries. In the euro area as a whole, labour costs per hour worked reduced their rate of year-on-year growth to 1.1% in Q3 due mainly to the wages component. Of note among the main countries is the rise in labour costs in Germany (2.4%) and their containment in Spain (0.3%) and Italy (–0.4%). Given the conditions of the labour market, Germany's increase is no cause for concern; however, the figure from France (a 1.1% year-on-year rise in labour costs) is more negative given the country's low level of labour capacity utilisation. On the whole these figures show a clearly positive trend in Europe's labour market.

Inflation remains stable. The variation in prices stays stable in spite of continued falls in the energy component, as shown by November's general inflation figure, 0.2% year-on-year, just 0.1 pps higher than October's figure. The increase in prices for services and industrial goods kept core inflation at significantly higher levels in November (0.9% year-on-year). Sustained improvements in domestic demand and the labour market will push up core inflation in 2016, as shown both in our forecasts and those of the ECB. These factors will also strengthen general inflation although its performance will largely depend on the behaviour of oil prices.

Intra-European trade offsets the slowdown in foreign demand. The boost provided by domestic demand is minimising the effect of weaker foreign demand. October saw a break in the year-on-year slowdown of exports from the euro area (1.5%) thanks to an increase in intra-European exports (3.6%). This shows how the euro area's recovery is due to strong domestic demand, helping to ease the effects of the slowdown in emerging economies. By country, intra-European exports grew at a good year-on-year rate in Germany (6.4%), Spain (8.9%) and Italy (2.3%), while exports to countries outside the EU shrank (–4.4% in Germany, –3.6% in Spain and –2.1% in Italy). Meanwhile France recorded the opposite performance with a year-on-year change in intra-European exports of –0.7% and an increase in exports towards countries outside the EU of 3.6%. Total exports continued to grow in October in Germany (1.7%), Spain (4.3%), France (1%) and Italy (0.3%).

Access to credit continues to improve for companies. SMEs are following in the wake of large firms in the recovery. According to the latest data from the Survey on the Access to Finance of Enterprises (SAFE) in the euro area, SMEs are improving their performance in terms of earnings and, between April and September 2015, only 1% reported lower earnings compared with 10% between October and March 2014. Moreover, for the first time since 2009 SMEs believe that the supply of credit is enough to meet their financing needs. Specifically the percentage of small and medium-sized enterprises perceiving that credit is more readily available continues to grow. This shows that credit conditions have improved during the implementation of QE and underlines the good tone of the recovery.

Political uncertainty hinders the recovery in Portugal. The good tone suggested by the country's activity has been marred over the last few months. Portugal's economy continued to grow in Q3 compared with the previous year (1.4% year-on-year) but stalled compared with Q2 (0.0% quarter-on-quarter). By component, in quarter-on-quarter terms public consumption and investment fell but were offset by private consumption and the foreign sector. However, this positive contribution by the foreign sector masks a slump in activity as the increase was due to a larger drop in imports (–3.0%) than in exports (–2.1%). These data occur within a context of political uncertainty with a fragmented parliament after the elections on 4 October which has led to a coalition government of Socialists, the Communist Party and a left-wing bloc. There are doubts regarding the commitment of this new government to carrying out reforms and the presidential elections on 24 January will be the next political test. The country's high level of public debt (129% of GDP) and unemployment at 12.4% indicate that it needs to continue implementing reforms. Moreover, its close ties with Brazil and Angola, which have been a source of growth over the last few years, could now represent a risk factor due to the recession both countries are experiencing. 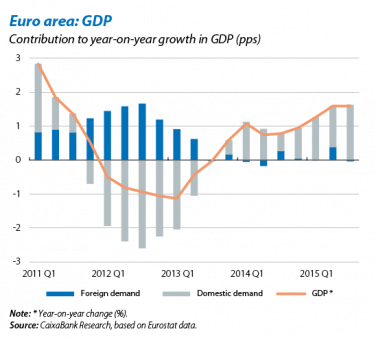 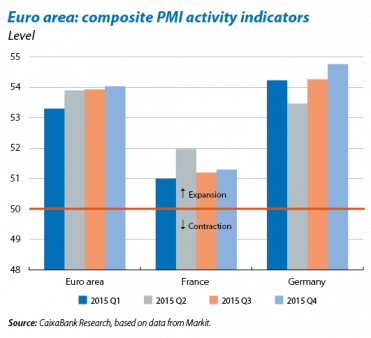 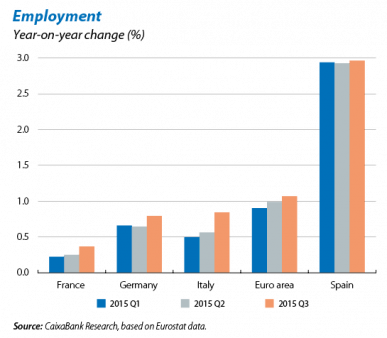 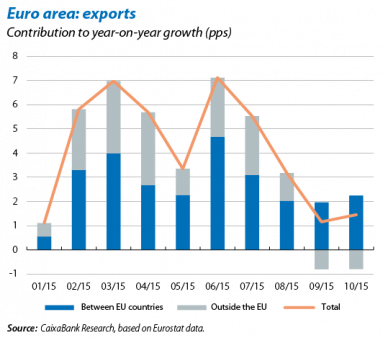 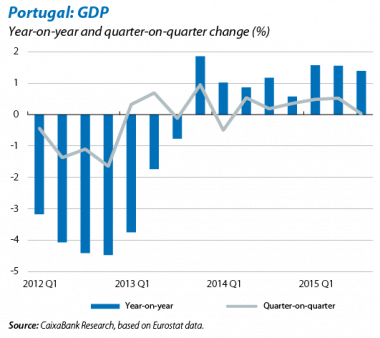