Global economic growth is one of the key variables to gauge the overall state of the economy. In this article, we perform a comprehensive analysis to understand which factors are driving growth in real time and which countries are acting as catalysts for this growth. This analysis helps us to get a sense on which could be the outlook for the coming quarters, an exercise which is particularly important at a time when some indicators have been lower than anticipated and there is a very heated discussion as to whether the current rate of growth will be sustained.

To begin with, we developed an indicator which estimates the global growth in real time using the information provided by the main indicators of economic sentiment, financial conditions and geopolitical risks.1 As we can see in the first chart, the indicator developed is able to mirror the global growth data that we have witnessed over the last few decades with remarkable precision (it has an explanatory power of 98%). Interestingly, whereas in 2016 our indicator was higher than observed growth, in recent quarters this situation has reversed: global growth has stood slightly above that predicted by our indicator.

This indicator helps us to visualise how the economy is evolving. Based on the data that has been published in April, May and June for the different variables, we estimate that global growth stands at around 3.7% in Q2 2018, virtually the same as we had in Q1 and just 1 decimal point below the figure for Q4 2017. This exercise therefore suggests that global growth remains very strong. All in all, the indicator stands slightly below CaixaBank Research’s growth forecast for Q2 of this year (3.9%). If we take a brief look at the different variables that we use in our analysis, we note that those which are casting a shadow over global growth are the sentiment and confidence indicators in the euro area, the sentiment indicators in China and the upturn in political and geopolitical risks. The rest of the indicators continue to show significant growth, and although the financial conditions have tightened slightly, they remain rather lax.

What factors help to explain the burgeoning growth that we are currently witnessing? Here at CaixaBank Research, we have repeatedly highlighted the improvement noted in the sentiment and confidence indicators, the accommodative financial conditions and the reasonable commodity prices as being the main drivers behind the encouraging figures and positive outlook for global growth, which is expected to stand at 3.9% in 2018. As it happens, the quantitative analysis we have performed reinforces this view. Historically, the relationship between these factors and global growth has been very strong. It is therefore no surprise that at their current levels, which are conducive to a thriving global economy, we are witnessing global growth.

Using sophisticated statistical techniques, we can discern each factor’s contribution to global growth. Specifically, since 2015, the financial conditions have made a slightly greater contribution than the sentiment indicators. This contrasts with the situation in the period between 1998 and 2007, in which the bulk of global growth was explained by the sentiment indicators, while the financial conditions played a secondary role. Finally, of particular note is the contribution made by commodities in both periods of boom. This demonstrates the beneficial impact that commodity prices, which are currently at a sweet spot, are having on global growth.

Let us now turn to the geographical analysis. We have performed an analysis by country which includes the world’s major economies. In particular, using data from the manufacturing PMI, we studied which countries have made the biggest contribution to global growth since 2015.2 We identified that the main driver behind the global economy in the last three years has been the US, with a weighting of 23%. It was followed by the economy of the euro area, with a weighting of 16.5%, and by the Chinese economy, with a weighting of 13.5%. Turkey and Brazil also stand out as important countries for the global economy, a significant finding considering the political uncertainty currently hanging over them.

But how will the global economy evolve over the next few years? By forecasting the different variables that contribute to growth,3 we can predict how global growth will perform in the coming quarters. On this basis, we expect growth to gradually slow down in 2018 and 2019. Specifically, growth is expected to stand at an average of 3.7% in 2018 and 3.6% in 2019. These are considerable growth rates, albeit slightly below CaixaBank Research’s growth forecasts, which are 3.9% for 2018 and 3.8% for 2019. The expectations of somewhat more demanding financial conditions (although still relatively accommodative), of political and geopolitical risks remaining at relatively high levels and of somewhat less buoyant sentiment indicators in the coming quarters are the main factors in our model that explain this slowdown.

As we have seen in the analysis of the factors supporting growth, the financial conditions have played a much bigger role in driving global growth in recent years, as a result of the ultra-expansive monetary policies that have been implemented. Therefore, it is particularly interesting to assess our growth forecast’s sensitivity to how the financial conditions might develop in 2019. As the fourth chart shows, if the financial conditions in 2019 were to return to the levels of their historical average since 1971 (which is a value of 0), rather than applying those forecast by our model (namely, financial conditions that are slightly more demanding, but still rather accommodative), our indicator would show an average growth of 3.0%. This is 0.6 pps lower than our forecast, representing quite a substantial deceleration in growth. If, on the other hand, the financial conditions in 2019 were to remain at their current lax levels, our growth indicator would increase to 4.1% in 2019, 0.5 pps above our forecast. All in all, these scenarios show how sensitive global growth is to financial conditions. It is therefore particularly important that the monetary normalisation processes that are currently taking place in the US and Europe occur gradually and are well communicated.

In summary, our analysis suggests that, despite the European economy showing signs of poorer health in Q1 2018 (and never more appropriately described if we take into account the flue epidemics of this winter, which are estimated to have held back economic activity in several countries), the global economy has not been shaken and continues to go from strength to strength. The forecasting exercise we have performed indicates that global growth could slow down slightly in 2018 and 2019 and that aggregate growth could be slightly lower than we expect. In any case, we must be cautious: changes in the financial conditions in the current context of monetary normalisation, political and geopolitical risks and how the price of crude oil changes will prove decisive over the coming months for whether or not these predictions will be confirmed. Let’s not count our chickens before they hatch...

1. In particular, we include the different variables that we have identified as being relevant to global growth (PMI, consumer confidence indices, the financial conditions index of the Fed of Chicago, the commodity price index of the Commodity Research Bureau, the geopolitical risks index of lacovello and Caldara, etc.), both in terms of their nature and their geographical relevance. We assume a linear regression using growth data on these variables since 2005 and we look at their predicted value in order to build the real-time indicator.

2. Specifically, we plot global growth against the PMI of the major economies and calculate what percentage of the explained variance is attributable to each country.

3. We forecast their future evolution with a predictive model using data from the last two quarters for each variable. 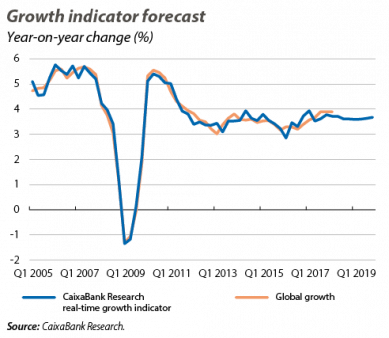 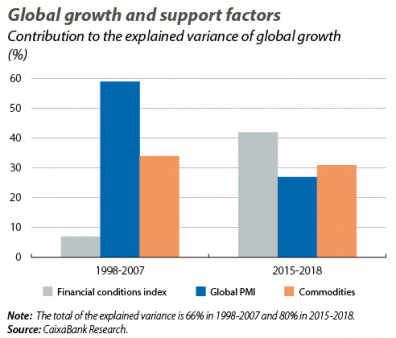 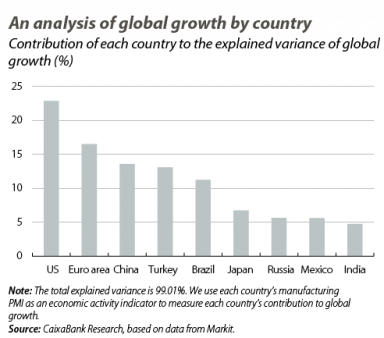